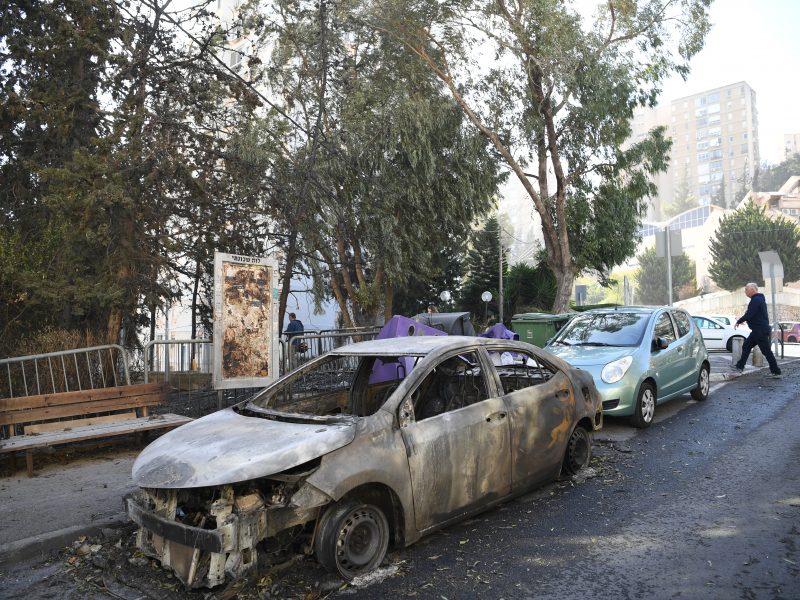 If you are an Israeli, the term “disaster marathon” is familiar to you. It’s more than a term—it’s a state of mind. When something bad happens in Israel, you enter a disaster marathon.This marathon includes non-stop news reports about what happened, even when there is literally nothing else or new to say. More and more commentators share their views, assumptions, and predictions for the future, even though we are still very much in the middle of the event. The wheels spin fast.

And then there are the consumers of these news reports. In a time of crisis, Israelis act as a well-oiled machine. There is the first news report that you hear, followed by intensive SMSs and WhatsApps messages and calls, making sure everyone you know is ok. Israel is a very small country and there is no place that is too far.

After ensuring everyone is alive and well, you find yourself unable to let go of the radio, the internet, the television. And although you know it will take time until you will be able to learn something new about what happened, until they figure out what to do, you just can’t let go. This is what we Israelis call a disaster marathon. It always feels like by talking about it or reporting it or discussing it—and even more so by reading about it, hearing about it, and seeing the news about it—we are all trying to gain some kind of control over the events, a control that was lost with the disaster.

This is what the last week of November felt like. This Thanksgiving, Israel was on fire. Israel experienced five days of wildfires that burned across the country. The dry weather, strong winds, and lack of rain created an overwhelming cycle of one fire after another all around Israel—but most intensely in the areas of Haifa, the Galilee, and the Jerusalem mountains. With the first piece of news that appeared on my cellphone—the marathon began. Messages kept appearing: live updates from my soon-to-be brother-in-law about his family house in Nataf that almost caught fire, a favorite restaurant that was burned to the ground, more and more pictures of the city of Haifa that suffered the most, and the map of Israel with fire icons that continued to appear.

Panic was everywhere. The news started reporting assumptions about this fire being a new version of terror, and the assumption was that the arson was done by Israeli Arabs and Palestinians. That, of course, added another twist to the panic, and added more fuel to the fire.

The marathon of news continued with reports about all of the help Israel was receiving, trying to get control over the fires. Beyond the 2,500 Israeli firefighters, Israel, which is always the first country in the world to send aid and rescue teams to other countries suffering from natural disasters, was at the other end of the equation this time and got help from Cyprus, Turkey, Russia, Italy, Spain, Jordan, Egypt, Greece, and Croatia. The Palestinian Authority sent 41 personnel and eight fire trucks to Haifa during the blazes there. To me, that was an important piece of the news reports. It shed some light and a lot of hope on this whole miserable situation. Another moment of pride and hope was the report of around 50 American Jewish firefighters who volunteered and joined the relief effort.

After five exhausting days, the flames were knocked down, and the destruction left behind by all of it was clearer.

Despite the destruction, there were no fatalities. Thousands of homes were damaged by fire—many of which are now temporarily uninhabitable or were completely destroyed. Hundreds of thousands of residents were forced to evacuate. A total of 32,000 acres of natural forest land was also burned.

Once the flames were knocked down, the marathon slowed down, and the investigation into the causes to the fire intensified. Out of the 39 Arabs who where arrested and investigated for arson, only two were brought to court for starting a fire. Both were found to have no “Palestinian nationalist motivation.” The rest were released back home. It seems for now that it was the extreme weather that caused this disaster, but, in Israel, once again, it fanned the flames of distrust and hatred.

The optimist that I am wants to focus on the help Israel got—primarily help that came from the Palestinian Authority—the fact that we had no casualties, the fact that this doesn’t appear to be arson created by Arab citizens but rather a disaster brought on by extreme weather.

I’m praying for more rain, and that the marathons stay at bay. It would be nice to walk for a while.

After ensuring everyone is alive and well, you find yourself unable to let go of the radio, the internet, the television.