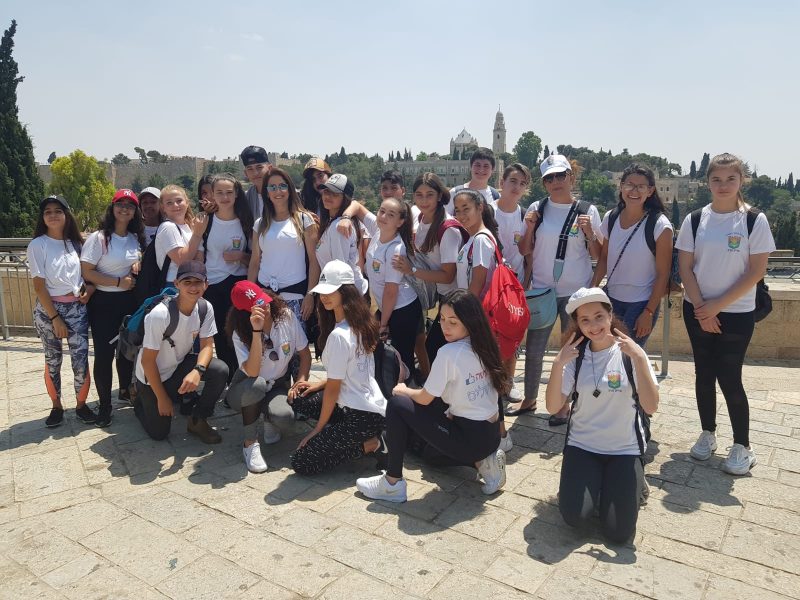 Shelly Zeiser, 26, is spending a year in Netanya, Israel as the Jewish Federation of Cincinnati’s Cincinnati Fellow in Israel, or Cincy Fellow. Shelly is an American emissary who is teaching Israelis about life, culture, and Judaism in the United States. While many cities, including Cincinnati, welcome emissaries from Israel to the United States, the Cincy Fellow program is the first to do the reverse, by welcoming an emissary from the US to Israel. Cincy Fellows is a Partnership2Gether program of the Jewish Federation of Cincinnati.

A few weeks ago, I yelled at someone on the bus. I was heading to Tel Aviv Pride with friends, and a woman began to heckle one of them. When she said, “Where is our parade?” without thinking, I started yelling back. I yelled about the Rabbinute and marriage equality. I yelled about safety and privilege. I yelled in defense of a country that has the only safe place for gays in the Middle East, and I yelled because it’s a country that still has a long way to go. Then, I took a seat on the bus and, without asking its owner, I petted a dog.

This anecdote is noteworthy not because I changed this woman’s opinion on gay rights; I most certainly did not. It’s noteworthy because it was shocking and felt very out of character—or so I thought at the time. I have spent almost ten months trying to positively connect with and influence Israelis. I have tried to find ways to quantify and measure the success of our interactions and determine if I am having an effect. However, what I hadn’t thought about, until yelling at the woman on the bus, are the ways in which living in Israel has affected me. I have more chutzpah now. It doesn’t typically manifest itself in yelling at people on public transportation (thank goodness!), but it does mean that I take every opportunity I can to discuss the topics I’m passionate about, and if there isn’t an opportunity, I create one.

I have been volunteering weekly at Moadon Volume, a teen music center, where I have had some of my most fruitful exchanges on pluralism. It was there, through my relationships built upon music, that I learned even Doritos are “Kosher for Pesach” in Israel, and that I shared we have “not Kosher for Passover” matzah in America and our grocery stores have just an aisle or two of kosher foods, most of which are actually just Israeli snacks.

I was able to connect with religious and secular teens, as well as Ashkenazi, Sephardic, and Ethiopian Jews, and to lead discussions on the interactions of race, religion, and gender in Israeli and American societies and governments. I do not know what the impact of these conversations will be, but I do know that the next time someone mentions the United States, or Jews living outside Israel, to one of my teens, they won’t just be thinking of some faraway place or population.

Israel has also given me a wealth of professional opportunities. Over the course of this year, I have been able to represent Cincinnati and American Jewry to more than 1,200 people through guest lectures and speaking o

pportunities. These included a round table at the General Assembly for the Jewish Federations of North America (JFNA) and a panel for all future schlichim (emissaries) going to Jewish communities in North America. Through intentional development and curating of new spaces, we have been able to open more doors and increase receptiveness to American Jewry.

Last year, my predecessor Brianna wrote, “I had to embrace feeling comfortable being in a place that wasn’t accustomed to me—or anyone like me.” I’m proud to say that after this year, many more places and people are not only accustomed to “people like me” but are beginning to notice all we have to offer and are welcoming us with open arms. I recently realized that next year, there will not be a student at Tchnerichovsky Middle School who remembers a time before the Cincy Fellow or Cincinnati Day. It makes me proud to think of this program as going from something revolutionary and new to something that we consider an instrumental piece of our partnership.

Living in Israel has also added a new dimension of connection to my Jewish identity. My connection to Judaism really began when I lived in Cincinnati, and it has deepened throughout my year in Israel. We always make comments about how we are “one family,” just on different sides of the ocean. But I never had family in Israel before. And now I do. When delegations from Cincinnati came this year, I found myself feeling the same sense of pride sharing Netanya with them that I feel when I share Cincinnati with people in Israel. A group of my friends gave end-of-year superlatives, and I won “most likely to talk about their hometown,” which while I am incredibly honored to receive, I think is only partly accurate. My award was decorated with the Ohio state flag, but I feel like a flag was missing: the Netanya city flag. To me, both feel like home.

“What I hadn’t thought about, until yelling at the woman on the bus, are the ways in which living in Israel has affected me.” —Shelly Zeiser