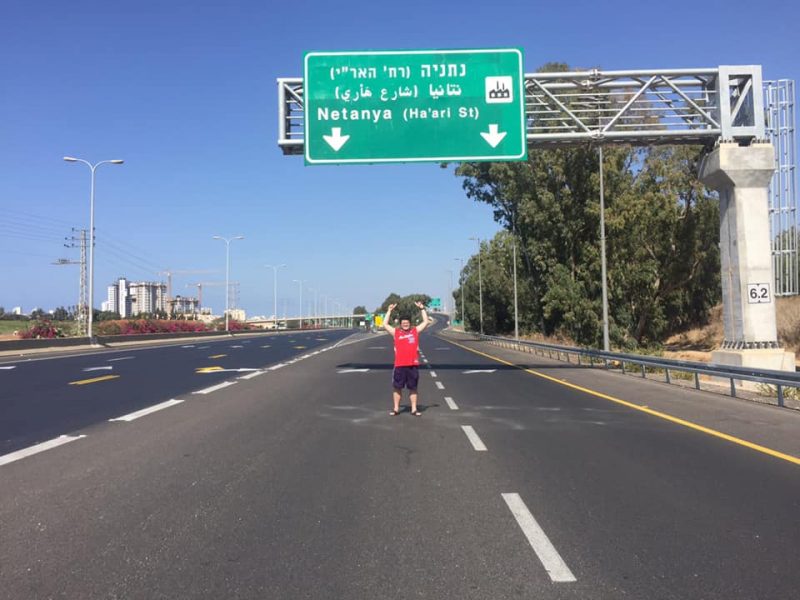 Cincy Fellow: In Israel, To Live Is to Live Jewishly

That strange dichotomy of familiarity and newness all at once, that was the High Holidays for me this year. I grew up in a Jewish household, but in a primarily non-Jewish community. Outside of my home, I had to seek out opportunities to live Jewishly and observe the holidays. In Israel, to live here is to live Jewishly. Suddenly, I am part of the majority, a majority that exists nowhere else in the world—a profound change that I am relishing.

It is incredibly easy to live a Jewish life. In Israel, everyone celebrates Shabbat, even those who are not religious. Everything shuts down, and from sundown Friday to sundown Saturday, Israel grinds to a halt. I love the ritual of Shabbat and love that I get to experience it here every week.

Yom Kippur was a unique experience as well. Before I arrived, people told me it would be very different, but I was not expecting just how different. Everything shuts down. Everything. I was able to walk out onto the highway because no cars operate (except emergency vehicles). That stark visual difference aside, the biggest change was actually the atmosphere. In Cincinnati, Yom Kippur is a somber affair, full of self-reflection. The fast is always difficult, and large portions of the day are spent in temple. While that is also true in Israel, instead of being a somber day, it is very lively. Everyone is out in the streets. The kids who are too young to fast are on their bikes having the time of their lives. Their parents are also there, reconnecting with neighbors and enjoying the warm night. Familiar yet new.

In any move to a new country, there is a bit of getting used to the environment. In Israel, that has included a lack of structure, nothing running on time, the directness of the people, and the weather. However, the hardest thing for me to get used to has been the size of the drinking glasses. No matter in a restaurant or in a person’s home, the glasses are tiny compared to those in the United States. I am constantly getting up or asking for more water. I am used to being able to fit everything I will want to drink in one glass—something I now consider a luxury.

My first two months in Israel have been incredible and life changing. I have been attempting to immerse myself in Israel culture while maintaining my Cincinnati/American identity. The community here in Netanya has been incredibly welcoming, and I have never felt alone. I have spent almost every holiday or Shabbat in the company of people connected to the Cincinnati/Netanya partnership.

The students and teachers at Tchernichovsky High School have also welcomed me with open arms. This can be attributed to the great work the two previous Cincy Fellows did before me. They left very large shoes to fill. While the first two months were a little balagan (chaotic) because of the holidays, school has calmed down considerably, and a normal routine has emerged.

I teach English to seventh, eighth, and ninth graders. Their English skills vary wildly from almost no English knowledge to fluency. However, no matter their level, they are always excited to learn. We go over vocabulary, grammar, and reading comprehension. For the more advanced students, we have in depth talks about the United States, Israel, and Judaism. Next, I will begin to bring more specific elements into the lesson plan as related to Jewish pluralism, the Cincinnati Jewish community, and the Israel/America relationship. I am very excited for to dig in a little deeper over the next eight months.

“In Israel, to live here is to live Jewishly. Suddenly, I am part of the majority, a majority that exists nowhere else in the world—a profound change that I am relishing.” —Ezra Babcock, Cincinnati Fellow in Israel