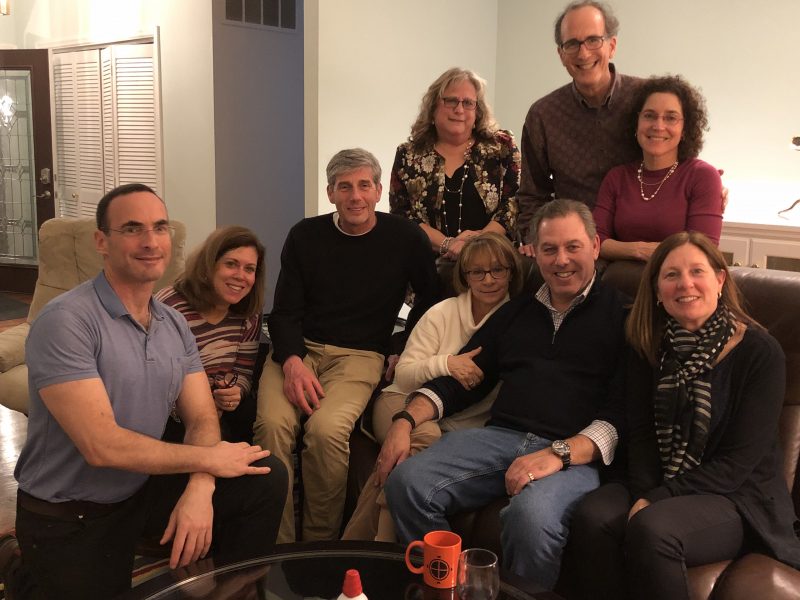 Emissary from Israel Amnon Maggid (far left) is leading discussions called Israel In Your Living Room, where community members are able to have candid conversations about a range of issues.
July 31, 2019 | 0 Comments
Tweet
Share34
Share
34 Shares

“To understand who we are as a people, as a religion, as a culture, and as a nation, we need to discuss Israel,” said Barb Miller, Director of Community Building at the Jewish Federation of Cincinnati.

However, that has become more of a challenge. “The discourse has changed dramatically in the last two years. People feel like they can’t speak to each other; they’re losing friends because of Israeli—not to mention, American—politics,” said Amnon Maggid, community shaliach, or emissary from Israel.

Miller and Maggid have seen a growing divide on a number of Israel-related issues across the Cincinnati and American Jewish community. “We felt it was really important that we somehow promote civil dialogue, that we encourage conversations in a safe setting,” Miller said.

This year the Israel Center of the Jewish Federation is encouraging community members to host book club discussions on Yossi Klein Halevi’s New York Times bestseller Letters to My Palestinian Neighbor, then hear the author speak this fall on the evening of October 29 at the Mayerson JCC. In addition, book clubs are also occurring in seven different public libraries throughout the summer months.

Meanwhile, Maggid is helping facilitate discussions about any topic related to Israel, which are convened and hosted by community members in their own homes. This is called Israel in Your Living Room.

“Israel in Your Living Room brings a small group of people together and allows them to explore selected topics they wish to better understand or discuss,” Maggid said.

Some of the hot topics they have requested are:

Miller said she hopes these conversations allow people with different points of view to sit together while listening to one another’s viewpoints.” She said the purpose of Israel in Your Living Room is not to push an agenda, but instead to allow people to ask questions, debate constructively, and learn more. “Amnon, as our Israeli shaliach, can add flavor to the conversation by giving his personal perspective on a wide range of topics.”

Maggid wants people to understand what it means to be Israeli in the 21st Century, and he wants to help bridge and engage the Cincinnati community with the Israeli community. “I’m willing to be challenged from the left, from the right, from up, down, whatever. I don’t necessarily have the answers, but I think together, we can find some common ground.”

Liz and Paul McOsker of Isaac M. Wise Temple host a monthly chavurah (fellowship group) and invited Maggid to attend an Israel in Your Living Room event just ahead of Israel’s recent elections.

“The value that Amnon added to our discussion was his own knowledge and deep understanding of the Israeli electoral and parliamentary systems,” Liz McOsker said. “As Americans, that’s a pretty hard system for us to understand.”

“I’m not sure if our chavurah would have had this discussion without Amnon,” Paul McOsker said. “We got much more out of it with him facilitating than we would have if one of us had tried to lead.”

The couple said the evening was characterized by a lot of really good discussion and participation—one in which people who had come purely for social reasons became highly engaged in the topic.

Maggid said, “Our shared future depends on all parts of Jewish peoplehood, and I think we need to work on complex issues together. Throughout history, this has enabled us to survive.”

To host an Israel In Your Living Room event or a Letters to My Palestinian Neighborhood book club, visit jewishcincinnati.org/weneedtotalk.

"Civil dialogue is something that is needed to build community. We don’t have to agree, but we need to hear each other, and we need to listen.” —Barb Miller