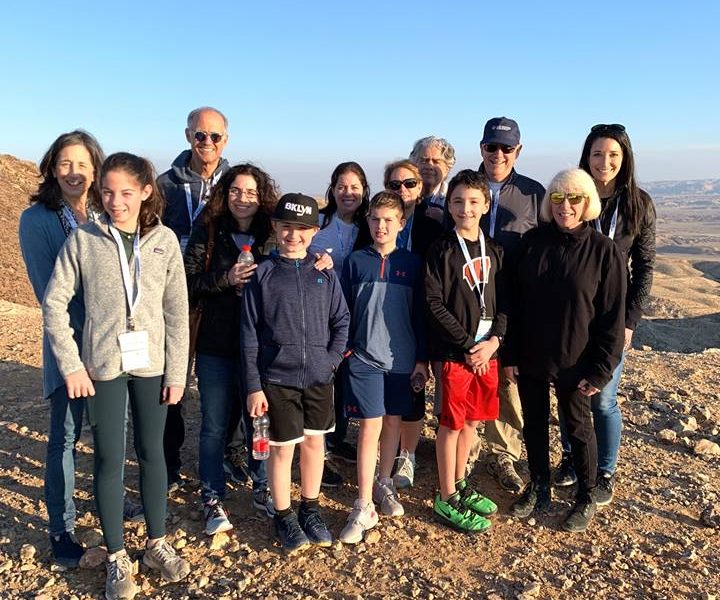 Four pairs of grandparents and grandchildren traveled to Israel as the culmination of a brand new year-long program called G2: Global Intergenerational Initiative, which aims to strengthen Jewish identity in fun and meaningful ways among youth in Cincinnati and other cities across the world.
February 20, 2019 | 0 Comments
Tweet
Share193
Share
193 Shares

‘Truly Incredible:’ Grandparents and Grandchildren Moved by Trip to Israel Together

“You should always remember where you come from so that it gives you strength to go forward.”

Jeanne Schmerler gave her grandson, Sammy, this advice after their recent weeklong trip to Israel over winter break. She and Sammy are one of four sets (zugot or “pairs”) of grandparents and grandchildren from Cincinnati who traveled together—the culmination of an innovative yearlong program, called G2: Global Intergenerational Initiative, to strengthen Jewish identity in fun and meaningful ways among youth in Cincinnati and other cities across the world.

“The trip was very moving for me. To be in Israel and share the experience with my grandson was truly incredible,” Schmerler continued. “It’s always moving to go to Israel, but even more so with family. I know it was for Sammy as well.”

Fresh from Ben Gurion International Airport, the Cincinnati cohort settled into their hotel on the beaches of Netanya; then mingled with G2 groups from Miami, Florida and Greater Metro West New Jersey. As the week continued, they connected with G2 cohorts from each of their partnership cities in Israel—Yeruham, Arad, and Netanya—as they explored, person-by-person, the idea of global Jewish peoplehood.

Over the course of the week, they explored Haifa and the Cave of Elijah. They learned the Ethiopian Jewish story of immigration, assimilation, and about the culture’s deep connections between generations. They took a Jeep ride through the desert, took a cable car up Masada, and swam in the Dead Sea. They shared Shabbat dinner with Israel Defense Forces soldiers. And they explored the Old City of Jerusalem, the Western Wall, and Tel Aviv.

Each destination was designed to building meaningful grandparent-grandchild relationships, cultivate shared Jewish values, inspire the next generation, and create lasting connections with Israel and Jewish peoplehood.

“Today’s grandparents tend to be healthier and more active,” said Barb Miller, Jewish Federation of Cincinnati’s Director of Community Building. “Therefore, they are increasingly more involved in their grandchildren’s lives than previous generations.”

As the number of multi-faith and multicultural families increases among American Jews, grandparents may become the primary source of Jewish culture and tradition for their grandchildren. That is the reality for Barry Gibberman.

“The trip was really special to me,” he said. “It was a tremendous way of introducing Judaism to my one-and-only grandson, Elliot. He’s very special to me, and this whole trip was just an amazing experience for the two of us.”

For other families, the trip was a highlight in what has been a lifelong commitment to Jewish education.

“Jacob learned so much,” his grandfather, Jeff Casper, said. “He had been to day school, Hebrew school, Sunday school, and he finally got to see everything in real life that he had been learning about.”

The first-of-its-kind program was launched in 2018 by The Jewish Agency for Israel, in collaboration with the Jewish Federation of Cincinnati and its Partnership2Gether program. The trip to Israel was funded by each participating family. Leading up to the trip were monthly sessions during which grandparents shared their life experiences, values, and heritage with their grandchildren, all of which helped inspire the younger generation.

This yearlong journey was about learning and teaching each other. The programming started with strengthening connections between the grandparent and the grandchild pair. As the monthly sessions progressed, the learning radiated outward; from the grandparent/grandchild relationship to the family, to the family’s Jewish values and connections, to the Cincinnati Jewish community’s history and institutions, and eventually to Israel and the global Jewish community.

Special homework (misimot) between sessions allowed further exploration of the topics, created formalized one-on-one time between the zugot, and allowed each generation to teach the other. Grandparents shared special family recipes as the pair cooked together. Grandchildren taught their grandparents how to podcast when they visited a special place important in their family’s Jewish roots.

“Watching the zugot create their own special relationships as the year progressed and then watching the Cincinnati cohort really bond over these shared explorations and experiences was incredible,” said Sharon Spiegel, Federation’s Community Building Manager and facilitator of the Cincinnati G2 Program. “These teens have been given the gift of deep, intergenerational connections. They are our community’s future. They have been given a deeper understanding of their past, and our community will be strengthened!”

The experience was equally meaningful for the grandchildren who participated.

“I liked Israel because I got to learn from my grandparents a lot and make connections with them,” Jacob Baron said. “My favorite place was the Western Wall because I felt close to G-d.”

“You should always remember where you come from so that it gives you strength to go forward.” —Jeanne Schmerler