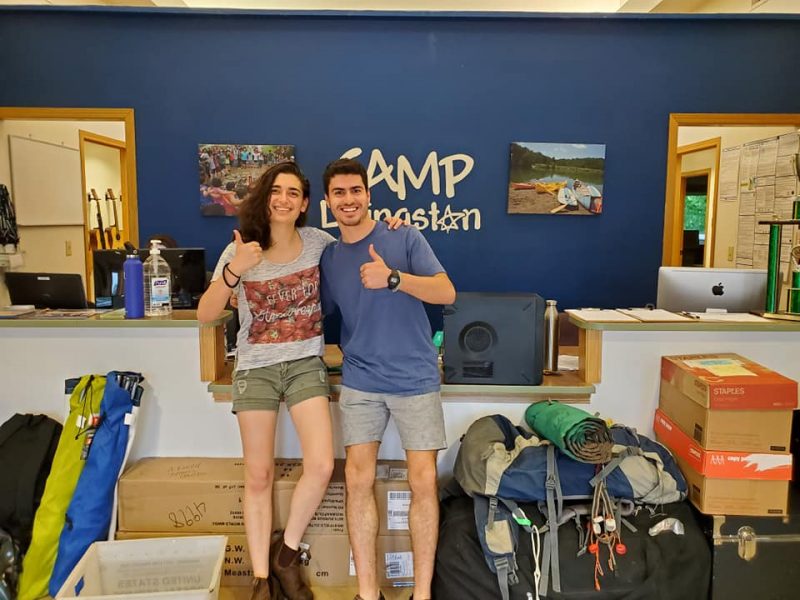 Young emissaries Adi and Asaf arrive at Camp Livingston for the summer, where they will be camp counselors before returning to Israel.
May 29, 2019 | 0 Comments
Tweet
Share250
Share
250 Shares

Young Emissary Will Continue His ‘Mission’ When He Returns to Israel

Each September the Jewish Federation of Cincinnati welcomes two new Friends from Israel/Chaverim M’Israel. This year we welcomed Adi Itscovich and Asaf Munk, who will stay through summer 2019. This is the 15th year of the Chaverim M’Israel program, which brings two post-high school teenagers from our partnership city, Netanya, to Cincinnati to share their stories and teach people across the Cincinnati area about Israeli life. This is a Partnership2Gether (P2G) program of the Jewish Federation of Cincinnati.

I just can’t get enough! So I’m staying in Cincinnati another year.

…I wish. I’m (unfortunately) not staying, but I am continuing my work as an emissary when I return to Israel in August.

After a year of living and working in Cincinnati as one of the Chaverim M’Israel, I was selected as one of eleven Shin Shinim, as other cities call the Chaverim program, to fulfill my Israel Defense Forces (IDF) duty through The Jewish Agency for Israel’s Garin Nahal program.

In this role, I will do similar work to what I am doing now. For the first six months, I will live with the ten other young emissaries on a kibbutz (communal settlement), volunteering with orphan children or Jews who made aliyah (immigration to Israel). For the next year and a half, I’ll serve as an officer in the IDF. I will finish my three years of service by working with delegations of Israelis who will be traveling to Jewish communities in the Diaspora or Israelis who live outside of cities.

When I was approached by The Jewish Agency, the organization that runs both the young emissary program and this volunteer program, about the opportunity, I asked my parents for their advice.

They know me so well. They encouraged me to take the offer—as I have always had a commitment to serve others, and it will give me an opportunity to continue the mission I started this year in the US.

This program will give me the opportunity to blend my passions—Judaism, Israel, volunteerism, people—and help build bridges among people during those first critical months in a new home. I am humbled to be part of such an amazing program and to have been chosen as a future leader in Israel. It feels important. I feel like I’m carrying a mission on my shoulders, yet the burden is somehow light.

In addition to my official duties with The Jewish Agency and the IDF, I plan to be an unofficial ambassador for American Judaism. Not many people get to visit other countries and learn what it’s like to be a Jew elsewhere, so I plan to take what I learned back with me—and tell people about Jewish life in the Diaspora.

I will tell people that Jews in the US are accepting and inclusive. There is not one way to be Jewish; everyone has a place in the Jewish community here: affiliated with a particular stream, unaffiliated, Jews of color, LGBTQ Jews.

I will tell people there is great support for Israel in the US. Before I arrived in Cincinnati, I didn’t have the sense that people in Israel knew how supportive Americans are. Honestly, we don’t think much about it either way.

I will tell people that non-Jews are curious about Israel. Most people have heard things from the media but don’t know very much. When we interact with them at schools, they are thirsty to learn more about Israel and Judaism. They learn we are teenagers just like them, complete with the same “teenager issues.”

Those ideas I can take back with me, but there are some things I’ll have to leave behind:

Frozen Entrees. I discovered frozen Indian entrees—and other freezer delights—in the US. So delicious and convenient! My parents think I’m so American now. But you can’t buy them in Israel.

Prom. We have prom in Israel, but Americans have Prom, with a capital “P.” The dresses, the tuxes, the flowers, the dinner, the pictures. The prom. The party after prom. It is quite a spectacle, and I loved every minute of it. (Technically, I’m not in high school, but a friend from Sycamore High School invited me as her date for the evening.)

Emails. Everyone emails here! And I hate it. I actually feel great leaving this one behind.

Buffalo Wild Wings. This is truly an amazing place. It is quintessential American culture. Sitting in a restaurant, eating wings with your hands, surrounded by sports and all of your boys. I just love everything about it.

If it was an option to stay for another year, I would sign up. I have enjoyed every minute of my time here in Cincinnati.

“I am humbled to be part of such an amazing program and to have been chosen as a future leader in Israel. It feels important. I feel like I’m carrying a mission on my shoulders, yet the burden is somehow light.” —Asaf Munk, Friend from Israel/Chaver M’Israel, Jewish Federation of Cincinnati