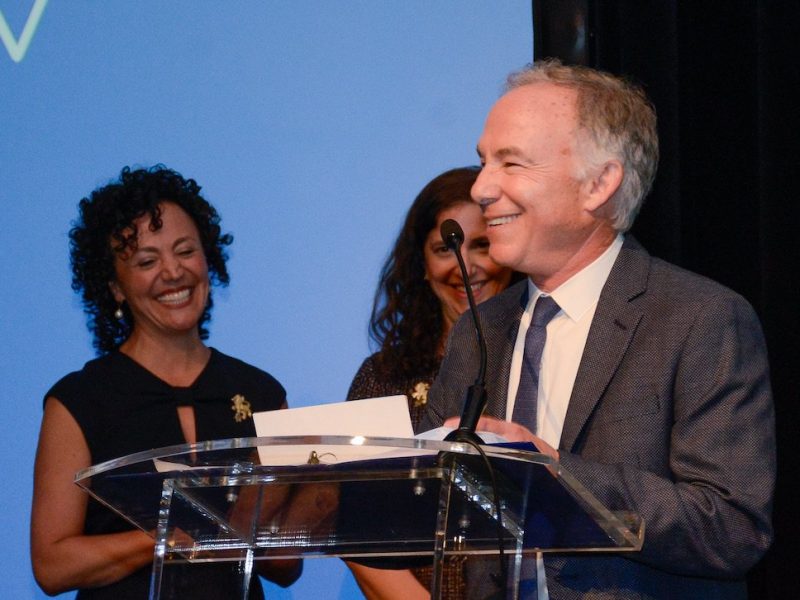 On May 15, at its well-attended 123 Annual Meeting, the Jewish Federation of Cincinnati honored five volunteers and professionals who have each brought passion and excellence to the Jewish community. Each was asked what it meant to receive their award; these are their replies:

“It is a privilege to do this work and make a difference in the lives of many children every year. Getting recognized is truly the ‘icing on the cake’ to an already sweet career, and I could not feel more honored.” —Abby Solomon

Assistant Camp Director at Camp Livingston, Abby Solomon won the Harris K. and Alice F. Weston “Junior Avodah” Award for Outstanding Community Professional with five or less years of experience. “I have known some amazing leaders and professionals in our community,” said Matthew Rosensweet, the camp’s Board President, “and there is no doubt in my mind that not only is Abby Solomon among the best, she is the best.” This summer will be her 19th at Camp Livingston.

“It’s a great honor to be recognized. If it weren’t for the supportive and professional team at Jewish Family Service, I wouldn’t be able to do the work I do.” —Gail Gepsman Ziegler

Director of the Jewish Family Service Center for Holocaust Survivors Gail Gepsman Ziegler won the Harris K and Alice F. Weston “Senior Avodah” Award for Outstanding Community Professional with ten or more years of experience. Now about to retire, Ziegler has overseen a $2.9 million program dedicated to the care and support of more than 250 Holocaust survivors since 2003. Under her leadership, the department has secured funding from international, national, and local sources, developed innovative approaches, and always remained committed to best practices. “A fierce advocate, Gail has been instrumental in growing and strengthening the Center and putting survivors’ needs first,” said Ann Sutton Burke, Jewish Family Service Director of Aging and Caregiver Services.

“A thriving and welcoming community doesn’t just happen—it is created by committed community members working together. I am proud of my part.” —Sharon Spiegel

Sharon Spiegel, the Jewish Federation of Cincinnati’s Community Building Manager, also won the Harris K and Alice F. Weston “Senior Avodah” Award for Outstanding Community Professional with ten or more years of experience. She is also retiring soon. Spiegel has created strong bridges between Cincinnati and Israel, and she gives her whole heart to her job. Well known for having supervised many sets of 18-year-old Israelis who come for a year to Cincinnati as Chaverim m’Israel, Spiegel now leads Partnership2Gether programs for the Federation, again creating meaningful relationships between Israelis and Americans. This past year she helped launch a first-ever program to connect American and Israeli grandparents and grandchildren to each other, and to their Jewish identity. “Sharon brings tremendous passion and commitment to her job every day,” said Shep Englander, the Federation’s CEO.

“Receiving this award is a humbling shot in the arm. It signals to me that it’s possible to combine personal passions and communal commitment in a way that is deeply gratifying.” —Arna Poupko Fisher

Later in the evening, Arna Poupko Fisher won the Nancy and Robert Goldstein Volunteer of the Year Award. She serves as adjunct faculty of the Judaic Studies department of the University of Cincinnati and the Hebrew Union College- Jewish Institute of Religion. In addition, Fisher is a member of the core faculty of the Wexner Heritage Program. Most recently, Fisher serves as co-creator and instructor in the Monaco Jewish Nonprofit Leadership Institute (JNLI), as well as the Hineini leadership program. Fisher is on the executive committee of the Jewish Federation of Cincinnati and is a member of the Board of Trustees of the Jewish Foundation. Together with her husband, Bobby Fisher, they led the capital campaign to build the Nancy & David Wolf Holocaust & Humanity Center at Union Terminal. “Arna is bold, thoughtful, and a visionary,” says Federation Vice President Debbie Brant as she presented her with the award.

“Jay Price was a blessing to our community, and to me personally. And to have my name, now, so closely associated with his truly humbles me more than I can express.” —Marty Hiudt

The final award of the night went to Marty Hiudt, the Jay Price Leadership Award. It marked the first giving out of the award since Price’s passing last April. Jay Price was a longtime leader throughout our community, and a mentor and close friend to Hiudt. Like Price’s, Hiudt’s involvement with Jewish Cincinnati extends decades. For Hiudt, however, he stepped up his involvement about eight years ago, when he cochaired the Federation’s Major Donor dinner, and since then has cochaired the Federation’s Annual Campaign twice (once with Price) “and never looked back,” as he says. Among other responsibilities, he is currently board President-elect for the Mayerson JCC.

“Arna and Marty, your leadership is inspirational,” said Danielle V. Minson, Chief Development Officer and Managing Director, after the final presentations. “Thank you for your commitment—and love—of our community.”