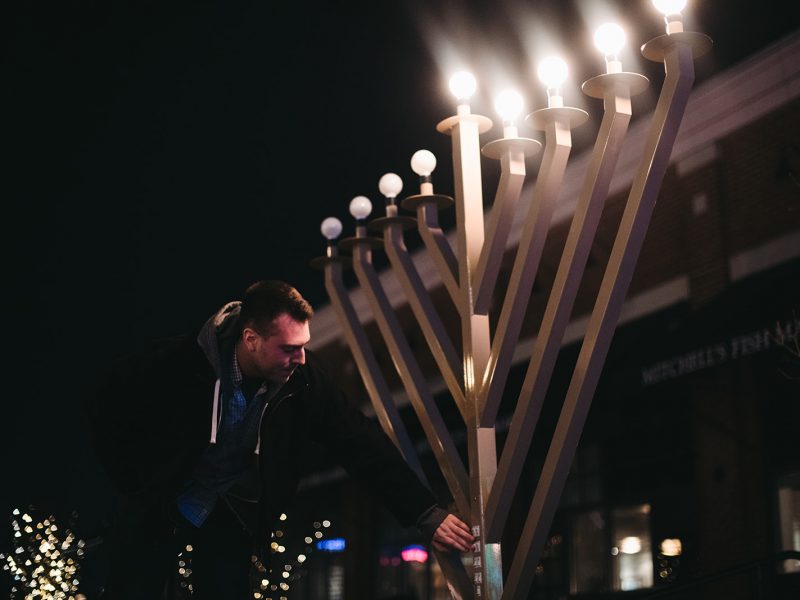 Be a Light that Shines Where Darkness Dwells

We are fortunate at the Jewish Community Relations Council to have an HUC Fellow working with us until May. David Bloom is a fifth year rabbinic student from Louisville. Throughout the year, David will offer his perspective about how Jewish text and wisdom inform our efforts and engagement on a wide range of issues at the JCRC. This Hanukkah, he offers us a reflection on the power we each have to be a light that shines where darkness dwells. I am looking forward to hearing more from him in the coming months. –Jackie

Winter has come and, like the snow that it brings, has blanketed the world not in light but in darkness. The rise of antisemitism and Islamophobia, xenophobia and nationalism, ignorance and hate of all kinds, has cast “a shadow over Europe.” What once was day has become night, and “[t]he night is dark and full of terrors.”

More than two millennia ago, when the province of Judea had fallen to the Seleucid Empire, King Antiochus IV Epiphanes instituted the first anti-Jewish laws in history in 167 B.C.E. He prohibited observance of Shabbat and the practice of circumcision, destroyed “books of the law” and defiled the Temple (1 Maccabees 1:41-48; 54-56). This oppressive legislation created a toxic environment. “[I]t became,” says James VanderKam, “nearly impossible to carry out the rites and practices associated with the traditional Jewish way of life.” Outraged, a pious family of rural priests, eventually known as the Maccabees, revolted against the Seleucids in 167 B.C.E. Yet, they fought against not only those Greeks but also Jews who had embraced Hellenistic practices inimical to Judaism. In other words, the Maccabean Jews, led by Mattathias ben Yochanan and Judah his son, warred against philhellenic Jews too. Eventually the former defeated the Seleucids, recaptured Jerusalem, and purified and dedicated the Temple in 164 B.C.E. On the twenty-fifth of Kislev that year, “Judas and his brothers and all the assembly of Israel determined that every year at that season the days of dedication of the altar should be observed with joy and gladness for eight days” (1 Maccabees 4:59). Hanukkah was born.

The rabbis kindled that light by rewriting the story. The Babylonian Talmud, Tractate Shabbat 21b explains that when the Maccabees regained control of the Temple, “they searched and found only one flask of oil that lay there…and it contained enough oil only to kindle for one day. A miracle occurred with it, and they kindled with it for eight days.”  In the story of Hanukkah, the rabbis diminished the darkness of violence and elevated the light of the miraculous instead. As Shaul Magid eloquently puts it:

“From a festival of insurrection (which may not have even been celebrated), the rabbis transformed it into a…celebration of miracle and the absent presence of God. [T]he radical rabbinic vision [was] meant, perhaps, to challenge the sense of autonomy that often comes with military victory. The rabbis de-triumphalized the Hasmonean [Maccabean] victory by turning our attention to matters of the miraculous. Perhaps in these days of conflict, hyper-nationalism, and force as a means of control, we should revive the rabbinic revision.” In short: Make Hanukkah Rabbinic Again.

The story of Hanukkah is a story of light and darkness, darkness and light. It is a story of military blood and darkness as well as miraculous hope and light. It is a story of Hanukkah and of ourselves, a story symbolized by the menorah itself. As my good friend and fellow rabbinic student puts it, “We are quite similar to the hanukkiah (menorah) that we…light…We create light and we also have spaces where darkness dwells.” Interpreting a midrash, he continues, “The Hanukkah candles are representative of our Jewish souls reaching up with grace and burning down with humility. We are neither the light of the flame nor the charred end of the wick…we are the entire hanukkiah…filled with light and darkness.” We are the darkness between the light—the darkness between the candles’ flames—and the light between the darkness. Night rolls into day and day into night. Yet, we know that even the blackest night is not devoid of light. We know that when clouds eclipse moon and stars, light still seeps into the world. We know that there is light, that it is good, abundant and effulgent, waiting to enter the world and make itself known. On Hanukkah, we bring a portion of all the light we cannot see into sight. Light cannot be contained; it always shines through darkness. “[T]he lights of the Hanukkah festival will shine forever” (Or Zarua 1.139).

"These days, many Jews find the story of Hanukkah especially meaningful, for it is a story of not only Jewish survival but also Jewish flourishing against all odds." –David Bloom, JCRC HUC Fellow