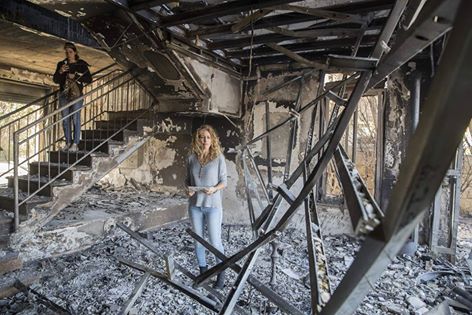 How You Help and Can Help More: Wildfires in Israel

Dec 5: Some 200 elderly citizens and Holocaust survivors whose hostel was damaged by the fire in Haifa received a monetary grant from the Jewish Agency to help them with their immediate needs.

Dec 1: Video from Jewish Federations of North America on Israel fires as of Dec 1

Ever since the fires erupted across Israel this past Shabbat, I have been grieving the many losses of the last five difficult days. Nearly 100,000 people have been displaced. Close to 2,500 firefighters have fought an unprecedented 480 blazes. The fires have damaged thousands of homes. The worst fires took place in Israel’s third largest city, Haifa. Some 60,000 Haifa residents have been evacuated, a full quarter of the city’s population. A total of 32,000 acres of forest has also burned, about 30 percent more than during the 2010 Carmel Forest Fire.  This summer, during the Congregation and Community Mission trip, many Cincinnatians visited and ate at Rama’s Kitchen, just twelve miles west of Jerusalem, which we have learned has been destroyed.

The impact on Israelis will be long-lasting.

Our partner agencies, funded by your campaign dollars, quickly jumped into action to help—see below. But more needs to be done.  There is something you can do today:

Federations across North America are raising additional funds to provide support to those in need. Donate here to the Israel Fire Emergency Fund.

How our partner agencies have already helped:

As we return to routine following the long Thanksgiving weekend, Israel is assessing the widespread destruction and tallying the damages caused by five days of wildfires that burned across the country. This morning’s report is written with cautious optimism that the fires are finally over. Strong winds are still expected for another 24 hours, but all fires are now under control, and the forecast is for considerably improved weather conditions from Tuesday including a high probability of rain later in the week.

The Firefighters
In total, 2,000 Israeli firefighters were joined by 450 IDF Home Command personnel. Some 70 Cypriot soldiers also helped fight the blazes, and around 50 American Jewish firefighters volunteered and joined the effort. The Palestinian Authority sent 41 personnel and eight fire trucks to Haifa during the blazes there.

The combined forces unleashed a total of half a million tons of water and flame retardant over the five days of fires. Fourteen Israeli firefighting planes were joined by fifteen planes from other countries, including the Supertanker, which was leased by the Israeli government from an American company. A total of 480 flight missions were invaluable to the efforts.

Israel has sent special thanks to the countries that contributed planes and personnel: Cyprus, Turkey, Russia, Italy, Spain, Jordan, Egypt, the Palestinian Authority, Greece, and Croatia.

The Causes
According to Israeli authorities, the initial fires were likely caused by the extreme weather conditions. However, police and fire investigators have gathered extensive evidence suggesting that many of the later–and largest–fires were deliberately set, with the arsonists taking advantage of the high winds and dry ground.

Government Response
Senior members of the government have promised fast and effective service to assist those who have lost their houses. Yesterday, the Cabinet held its regular Sunday meeting in Haifa (rather than Jerusalem), as an act of solidarity with the city. At the meeting, Prime Minister Benjamin Netanyahu directly addressed victims, stating, “All government ministries are committed to extending a hand to you quickly, to shorten the bureaucracy, and I say to brutally shorten the bureaucracy, to bring you assistance, relief and rebuilding as soon as possible. In the meantime, we will do everything necessary to maintain your remaining property.”

The situation regarding compensation has not yet been made clear, and will partly depend on whether (and which) events are declared to be “acts of terror.” This will help determine whether compensation is paid by private insurance companies or by the government.

The government has also announced a $650 per person emergency stipend for anyone whose house has been rendered “unlivable” by the fires.

Many Israeli commentators are noting that the fact that no lives were lost, and that damage could have been far worse given the massive blazes that took hold, is largely the result of the recommendations (and their implementation) that came about as a result of the Carmel Forest fires six years ago. Following that disaster, a complete overhaul and restructuring of Israel’s firefighting capabilities took place, including major investments in new equipment as well as new emergency fire protocols. Similarly, in the current crisis, the government was quick to act, mobilize firefighters and soldiers, and request backup resources from other countries, including leasing the Supertanker from the US.

The geographic areas affected by the fires mainly have strong local authorities who have handled the situation well. This can at least partially be attributed to Jewish Federations support over the years as well as improvements made based on lessons learned during previous times of emergency in northern Israel. A number of Federations partnered through the Jewish Agency’s Partnership2Gether effort helped send American firefighters to join Israel’s Emergency Volunteer Project.

Prime Minister Netanyahu also stated, “There is no doubt that thanks to the courage of the firefighters, the pilots from Israel and abroad, and to the determined response of the Israel Police, MDA, IDF, Home Front Command and the other rescue forces, the local councils represented here and the extraordinary spirit shown by Israeli citizens–thanks to all these, we achieved impressive control of the fires which, to a certain extent, were much more complicated and much more difficult than the Carmel fire.”

Partners
The Jewish Agency for Israel

The Jewish Agency has announced that it will provide cash grants of $1000 to families whose home was entirely destroyed and/or has been structurally damaged and cannot be lived in for the foreseeable future. It is estimated that there are around 700 such families. Funding for the grants will be provided by special contributions from Jewish Federations as well as Keren HaYesod communities. In addition, a number of Agency absorption centers have taken in people evacuated from the fires, including the Amigour housing facility in Kiryat Yam, which opened its doors to provide nursing care for 22 elderly Holocaust survivors who were evacuated from their nursing facilities in Haifa.

The American Jewish Joint Distribution Committee (JDC) has been focused on two of its traditional areas of expertise:

The Israel Trauma Coalition (ITC) is conducting a mapping of trauma needs with smaller municipalities that have been hit by the blazes (all except Haifa and Zichron Ya’akov).

Last week, ITC was called in to provide trauma relief at the Carmel Hospital, evacuation centers, and to provide backup to existing welfare teams in Haifa. The municipality in Haifa has requested further assistance from ITC in providing direct care to some 1800 individuals in the city, 20 emergency welfare teams, and 8 institutions that were evacuated. Similar requests for assistance have come in from Zichron Ya’akov and Halamish.

ITC is also considering adding another emergency call line in Hebrew and Russian, which in addition to helping direct people to municipal services being provided, would help identify potential trauma.

Over 200 devastating fires have displaced nearly 100,000 people across Israel and interrupted essential services. The impact on Israelis will be long-lasting.