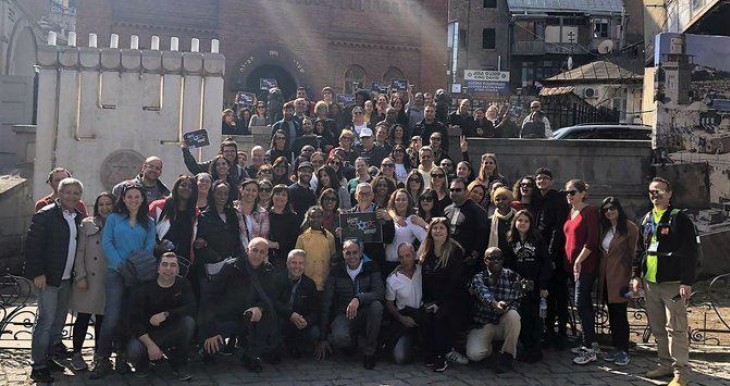 Determining how best to support Israel and Jewish communities in need across the globe with funds from the Jewish Federation of Cincinnati’s Annual Campaign is a labor of love for the fifteen members of the Israel and Overseas (I&O) Committee. In 2019 the Federation raised $1.8 million to fund Jewish programming outside of the United States—something volunteer and professional leaders feel is critical to remaining connected as a people.

“It is critical to invest in Israel and overseas, in programs that fight global Jewish poverty, connect the Jewish people, rescue Jews at risk, and ensure an Israeli democracy dedicated to Jewish pluralism,” said Barb Miller, Director of Community Building.

“Israel is our Jewish homeland,” added I&O co-chair Bonnie Ullner. “As Jews living in the Diaspora, it is to our benefit to stay connected to our Jewish homeland and promote the values we hold dear—like religious choice in marriage. We’re all in this together. I can’t imagine a world where American Jewry isn’t supporting Jews in Israel.”

That support is allocated in two ways. The majority of Federation funding supports the work of national organizations working in Israel and in at risk Jewish communities across the world on behalf of the Jewish Federation of Cincinnati and other North American federations.

The Jewish Agency for Israel (JAFI) helps connect the global Jewish family by bringing Jews to Israel, and Israel to Jews, by providing meaningful Israel engagement, and by facilitating Aliyah.

“Through our funding of JAFI, we are able to build real relationships between Cincinnati and Israel, including our partnership city of Netanya,” said Marcie Bachrach, I&O Vice President. “Our Partnership2Gether program, Israeli Emissary, and our Chaverim M’Israel are supported by these funds—all of which create lasting people-to-people connections.”

The American Jewish Joint Distribution Committee (JDC) works in impoverished Jewish communities around the world—including the Ukraine, Venezuela, and Ethiopia—to alleviate hunger and hardship, rescue Jews in danger, create lasting connections to Jewish life, and help Israel overcome the social challenges of its most vulnerable citizens, both Jewish and non-Jewish.

A smaller amount is allocated to grassroots organizations in Israel that support religious pluralism and the diverse expressions of Jewish identity, and this year five organizations were selected. Sixty-three Israeli organizations requested funding from the Jewish Federation for this purpose. Amnon Maggid, our community’s emissary from Israel, along with Noga Maliniak, our representative in Israel, researched all the organizations and narrowed the list to 35. The Federation’s Israel Center professionals, along with Bachrach and the I&O co-chairs and professionals further trimmed the list then distributed the contending proposals to committee members.

“Then our committee dug into each application,” Bachrach said. “We improved our method of assessment, allowing us to be more objective and comprehensive in our review of each project. Ultimately, we were able to fund five grassroots projects and three additional projects through JAFI and JDC.”

“The investment in the process this time around was really impressive,” added David Weiskopf, I&O co-chair. “It was a great team, and I think we made decisions that will have the deepest impact.”

This year’s grassroots projects include creating an app for the Chagim Center. This app will bring Jewish traditions—activities, songs, prayers, and Jewish content—directly into parents’ hands for holidays.

Funding will also be provided for the Jewish Renewal Jerusalem Collaborative Hub. It will be used by 10 to 12 different pluralistic organizations to help ensure the city’s future as an open and inclusive one.

In addition, the Federation will continue to support the Israel Religious Expression Platform (iRep). iRep is a national program launched by Kim Heiman just a few years ago. The purpose of this effort is to encourage in Israel religious freedom of choice in marriage. Originally this program received support from 17 federations, and more and more are now coming on board.

“We’re doing something else new this year,” Weiskopf said. “We’ve assigned committee members to each project we have funded, who will have an ongoing dialogue with the organizations in Israel. In years past, once we allocated the funds, we would get a report back every six months or so, but this year, we are looking forward to being much more hands-on.”

“While most of the funding for Israel goes to our partner agencies,” Ullner said, “it’s important to take a small amount and allocate them directly, as a committee, because it lets the volunteers learn and become invested in these programs, measuring the impact as well. In this way, we have a hand in promoting what we feel is important in Israel: religious freedom of choice.

“Anytime you are in the mix and in the decision making process, it becomes much more real and personal. You really understand where your dollars are going.”

Allocating annual campaign funds is a fair, democratic, and participatory process. The Israel and Overseas committee, co-chaired by Bonnie Ullner and David Weiskopf, and led by VP of Israel and Overseas, Marcie Bachrach and Director of Community Building, Barb Miller; Community Building Manager, Sharon Spiegel; and Community Shaliach, Amnon Maggid. The Committee is comprised of 18 volunteers who spend hundreds of hours over several months to make sure your gift goes to the Israel and Overseas programs that most effectively help the most vulnerable, nurture connections with Israel, and protect and energize pluralistic Jewish life locally and  in Israel. They make sure your gift is used wisely and with the greatest impact. For more information about allocations, visit jewishcincinnati.org/allocations.