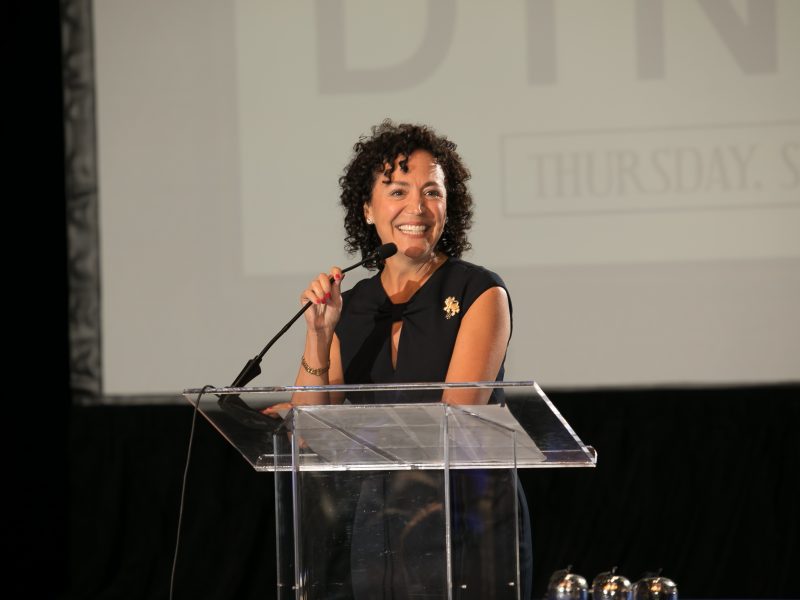 I am pleased to announce that Danielle V. Minson has been promoted to Federation President and Interim CEO. Danielle’s new role will help the Federation thrive at this crucial post-COVID juncture, and into the future. Please see the official announcement, below.

Debbie Brant, Board Chair of the Jewish Federation of Cincinnati, announced that Danielle V. Minson had been promoted to President on January 1, 2021.  With the departure of CEO Shep Englander on June 30, Brant also disclosed that Minson would step into the role of Interim CEO as of July 1.

“We’ve always been a forward-thinking organization, but with Danielle in this leadership position, we have strategically placed ourselves to be one of the best-run Federations nationally and to accomplish even more for our community,” said Brant.

“Danielle in this new role will facilitate greater collaboration, creativity, and agility within the community and organization. I don’t think we’ve ever been this strong,” said Brant.

Previously, Minson’s portfolio was Chief Development Officer and Managing Director. Minson has been with the Cincinnati Federation for a combined 19 years, having left to work at the Jewish Federation in Philadelphia. Previous to that, Minson left the US for Israel to participate in Otzma, a year-long program there focused on volunteerism.

Minson’s forward-thinking leadership has revolutionized the Federation’s revenue model. While historically Federations have centered the Annual Campaign as the single revenue stream, she transformed this revenue model, leading the development of the annual campaign match from The Jewish Foundation of Cincinnati; the strengthening of the individual giving/supplemental giving program, and the creation of Cincinnati’s legacy giving program, Create Your Jewish Legacy.  With her support, the Federation’s new Shared Business Services, which offers business and professional expertise to local Jewish organizations, also became an income-generating division.

Minson’s bold moves to increase revenue to strengthen the Jewish community may have the most lasting impact in the area of legacy giving, or posthumous giving. An area often neglected because of its lack of immediate return on investment, legacy giving nevertheless has by far the highest return. Under Minson’s energetic leadership, Cincinnati became one of the strongest Jewish communities promoting legacy giving. In fact, Cincinnati receiving nation-wide attention for the effectiveness and reach of its program. On the ground, Minson elevated endowment giving for 23 local Jewish institutions. This work secured more than $150 million in expectancies—ranking it first for communities participating in the national Life & Legacy Program, which strengthens legacy giving in Jewish communities in the US.

Minson’s successes are strengthened by her integrity. Community-driven fundraising efforts initially outside Federation have been entrusted to her management. For example, Minson led the hugely successful drive to fund the Nancy & David Wolf Holocaust & Humanity Center at Cincinnati’s Union Terminal Museum Center; as well as the recent community-based COVID-19 Relief Fund, which raised over $1,776,406 in the middle of a pandemic, when so many were struggling.

“Danielle’s passion and energy for this work are unmatched,” said Brant. “She is this perfect balance of institutional knowledge, high intellect, passion for the organization and the work, plus the ability to think creatively about how to address the needs of the future.”

Above all, Minson holds herself accountable to this community.  “At heart, I am a Cincinnatian,” said Minson. “I love our city. I love the Reds, I love opening day, I love our traditions. And I love Jewish Cincinnati. I came of age in this community; and I am humbled and honored to be able to give back in this new capacity.”

Minson refuses to rest on her laurels. With her signature emphasis on strategy and vision, she has charted three priorities for the Federation’s future: stronger collaboration, philanthropic growth, and deepened engagement.

The first goal is stronger collaboration. “I know we can find greater efficiencies and stronger programming through better collaboration among Jewish Cincinnati organizations; and also in the greater community,” said Minson. “We believe in being good allies. We believe in a strong, interconnected Cincinnati.”

Minson’s second goal is philanthropic growth. Given a shifting nonprofit landscape that has begun to de-emphasize communal giving, the model used by the Federation and United Way, this goal is core to the success of Federation’s mission. Minson said, “This priority is crucial. It will take our team’s most thoughtful and innovative efforts to create increased revenue long-term. But it is necessary.”

Minson’s third goal will be to deepen engagement. “The research from The 2019 Cincinnati Jewish Community study shows that an incredibly high number of people—48 percent of Jewish adults in Cincinnati—would like to be more connected to the local Jewish community,” she said. “We want to make those connections for each of those people. I would like the broadest spectrum of people to have the opportunity to feel as fully engaged as I do. Over the next decade, the Federation will try to achieve this ambitious goal.”

“We are in a strong place now,” said Minson. “But I want us to double our resources, double our support for the vulnerable, our seniors, and for our children. Double down, also, on the strengths that already make Federation, and this community, what it is.”

“I don't think we've ever been this strong.” —Debbie Brant, Board Chair, Jewish Federation of Cincinnati