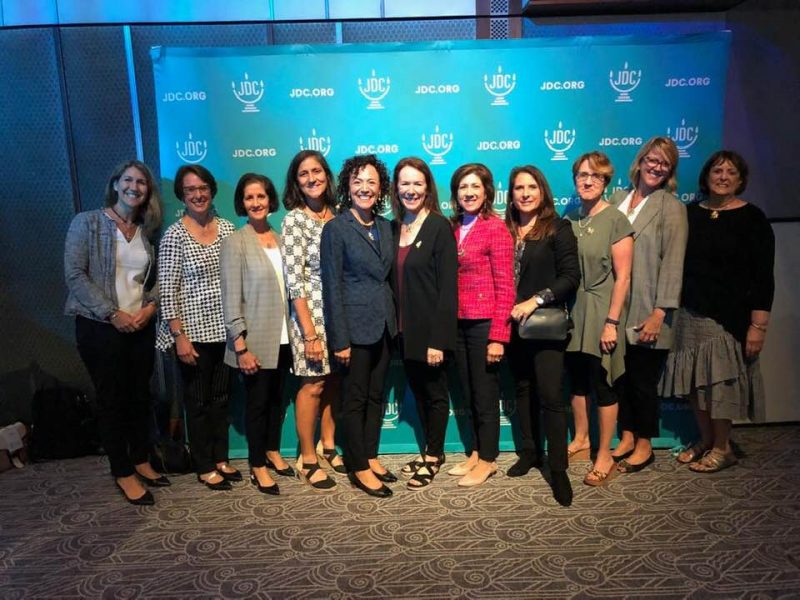 A dozen women from the Jewish Cincinnati community traveled to New York City for a first-of-its-kind summit: Imagine More. The event was the inaugural global women’s summit of the Joint Distribution Committee (JDC), and brought together philanthropists, activists, and advocates from around the world, who care passionately about women becoming agents of change for individuals and communities. The JDC is one of the Jewish Federation of Cincinnati’s two Israel and Overseas partners. They refer to themselves informally as “the 911 of the Jewish world” and specialize in helping the Jewish community’s most vulnerable, including those living in remote areas.

Michele Rosen, Jayne Lipman, and Susan Stern are the founders of Imagine More. Together they communicated the hard truth that, despite centuries of women being strong leaders for their families, their schools, and their communities, one of the most critical challenges for Jewish culture today, is the long overdue reckoning over the treatment and role of women. “We must create an environment where women are fully welcomed, valued, and promoted—with full equality and respect,” the three women wrote in an article, entitled “Celebrating Our Stories: Women Who Change the World in the Jewish Community and Beyond.” In the piece, which was posted on eJewishPhilathropy.com, the authors argue that to create change, “we must foster new paths for women to solve seemingly insurmountable challenges. That is the hallmark of our ingenuity: we believe change is possible, and once we put our minds to it, we imagine more, and change the status quo.”

Jennifer Zelkind, the Director of Women’s Philanthropy at the Jewish Federation of Cincinnati, (and leader of the trip), felt the summit was an important way for the women in attendance to appreciate the impact strong female leaders from around the world are having on the communities they serve, and to inspire women from all Jewish communities to do the same. “There were a lot of big ideas,” said Zelkind. “Despite hearing about some of the daunting situations Jewish women face in many parts of the world, it was very inspirational—especially to see women from all sorts of walks of life and backgrounds, taking steps to create positive change.”

Patti Heldman, Cochair of Women’s Philanthropy at the Federation, was deeply impressed by the experience:

This summit was a power of connection with each other in our own community, and also with nearly 500 other attendees who came together from cities across the US and the world. We had a Jewish cultural connection through our Jewish values. We saw the evidence that women have the power and foresight to impact their community in a positive way by improving the lives of their community. This was so inspiring.

The summit focused on three foundational pillars: Leadership Cultivation and Resilience; Economic Empowerment; and Fostering Women’s Health and Well-being. The speakers included Eva Stupka, a 17-year-old from Kishinev, Moldova, who is considered one of her community’s top Jewish leaders; Nela Hasic, a leading women’s health advocate from Bosnia and Herzegovina; Suzan Hassan-Daher, an Israeli Arab employment expert; Dr. Paula Johnson,  President of Wellesley College; Amanda Nguyen, the CEO of Rise and a 2019 Nobel Peace Prize Nominee; and Dr. Deborah Lipstadt, an academic and activist, whose brave efforts to combat antisemitism and highlight the poisonous impact of hate are an inspiration to Jewish women everywhere.

“There was a good diversification of different women speakers and topics, showing women making slow strides for women and [women’s] employment in their countries,” said Event Chair Susan Brenner. “One speaker, a young girl from Colorado (who was hit by a car while living in Israel), made a powerful statement about moving on and persevering,” she added. Reflecting further on the summit’s impact, Zelkind noted, “everybody left feeling like each person’s actions matter. The women from Cincinnati saw real examples of women of all levels—making a difference. All we have to do is imagine getting it done,” she said.

Zelkind was also struck by the comparative size of the Cincinnati delegation, which was one of the largest in attendance. “It’s really saying something. You would expect places like New York or Chicago to have a large representation, so for us to have such a large presence—it shows how dedicated the women are in our community.”

For Heldman, the summit stirred a sense of pride about the current progress, but also challenged her to face the ongoing needs of the future. “We saw first-hand how our dollars work, globally, to positively impact the lives of those who are underserved. We have a common belief as Jewish women, through our Jewish faith and moral values, to build and create a more prosperous society through kindness, compassion, and generosity. We have a collective responsibility to improve the lives of our community,” she concluded.

“There is power in the collective—getting women together as we harness one another’s strengths to make positive change,” said Danielle V. Minson, the Chief Development Officer and Managing Director of the Jewish Federation of Cincinnati, who was also in attendance.

The women were in New York City for three days and two nights. In addition to the summit, they went to the Museum of Jewish Heritage and toured the Lower East Side through the Jewish Conservancy. Their last stop, before heading back home to Cincinnati, was a delightful lunch at Katz’s Deli on Houston Street.