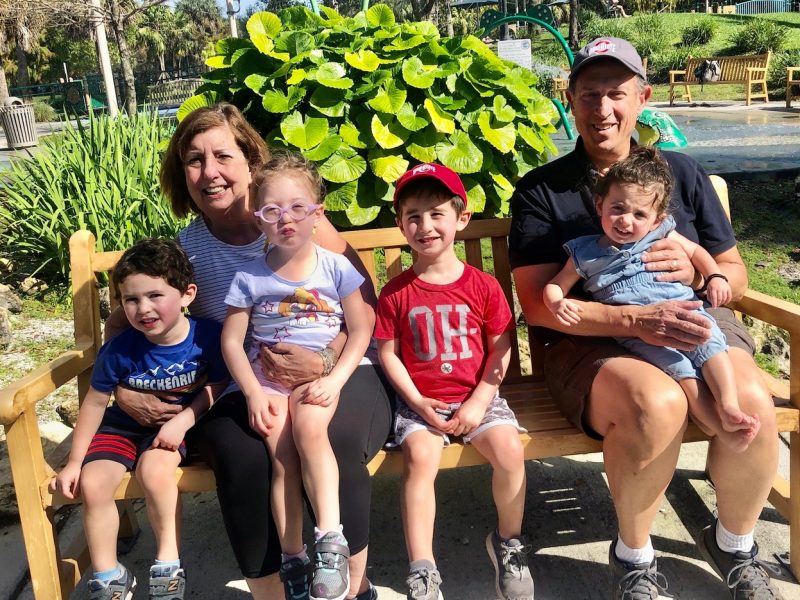 For Marsha and Mark Barsman, being active members of the Jewish community goes beyond just giving money. “It’s honoring and respecting others,” Mark said. “I’m a third-generation American. All four of my grandparents were born here in the US. I grew up in Forest Park, and I was one of the only Jewish people in my entire community.“

Mark said that he didn’t realize he was missing out on the many benefits of Jewish communal life until he started attending Jewish summer camps. “and I realized then that there was this entire Jewish world outside of Forest Park. When I went to college, I joined a Jewish fraternity, and I started to become involved with different Jewish activities as a result. These experiences changed my life.”

Marsha’s background in early life differed from Mark’s.  She grew up in a very active Jewish family in Columbus, Ohio. “My parents were always involved in philanthropic work, especially my father. He inspired all of us—his children and eventually their spouses and his grandchildren—to give back,” said Marsha. “His parents came from Russia and gave him a good life, and he always felt it was incumbent on him to pay it forward. We didn’t have lots of money, but my father gave a lot of his time.”

Philanthropy is a Family Mission for the Barsmans

Marsha’s father, Norman, co-authored a book called The Abrahamic Encounter, “a book about building bridges within the Jewish-Muslim world,” explained Marsha. “He really inspired me, and his work has come full circle,” said Mark, “because a lot of the work I’m doing as Executive Vice President of the Jewish Community Relations Council is built on the foundation he laid years ago.”

Both Marsha and Mark point to Norman’s legacy of philanthropy as a reason for their giving. “Early on, as we were raising our family, we had more time than we had disposable income,” said Marsha. “Because of that, we ended up getting involved with a lot of Jewish organizations throughout the community.”

The Barsmans say that their most cherished legacy is the one reflected by their children and grandchildren—who have embraced Jewish values as a way of life. “No matter what you do as a parent, you hope you’ve instilled the right set of values in your kids,” said Marsha. “We tried to model the behaviors that build strength of character and compassion for others, and now our kids and their families are active members of their Jewish communities in Columbus and Cleveland. That’s really inspiring for us, and we consider that our legacy.”

“I was with my grandson at the park when he was about three,” recalled Mark, “and he shared a football with another little boy. I told him that was nice of him, and he looked at me and said, ‘Papa, that’s a mitzvah!’ When you hear those words come out of your grandson’s mouth, you think somebody’s done a good job.”

A Simple Process to Ensure the Community for Years to Come

For the Barsmans, leaving a legacy goes beyond their family. They have also set up legacy gifts to several organizations within the Jewish community. “It was extremely important to us to designate certain assets in our will to provide ongoing support for various Jewish organizations that we feel are crucial to the continued vibrancy of Jewish communal life,” said Mark.

The Barsmans decided to set up their gifts in a trust, which has certain advantages over a will, notably that their assets will not need to go through probate. “We were advised to create a trust to make it simpler for our kids later on. So we were going to do that anyway, and it just seemed like an appropriate time to move forward to make our legacy wishes known. We took the Create Your Jewish Legacy (CYJL) form to our attorney, and it was just very simple.”

As the Barsmans were in the process of setting up their trust, COVID-19 hit. They worried as they saw the markets plummet initially. “We are recently retired, so we didn’t want to go overboard,” said Mark. “We set up amounts that were comfortable to us now, and it’s clearly our intention as things settle down to add to those amounts and also include additional organizations as beneficiaries. These things are never set in stone. We know we can change them as our situation—and the situation in the world—changes.”

Even during the current crisis, the Barsmans realized that this gift commitment doesn’t affect their finances in any way right now, which is another reason they decided to move forward with it. One thing they considered was to set percentages rather than amounts, which could also help with some of the uncertainties about both the market and future needs. Still, in the end, they preferred to designate specific amounts so the organizations and their kids would know what to expect.

Being Transparent with Their Children Has Been Key

The Barsmans discussed the details of their trust and legacy plan directly with their children and their spouses. “We wanted to be open and candid with them because they have a stake in it. It was just natural to be very transparent with them, and their unreserved support of what we’ve planned has been very gratifying,“ said Mark.

“We’re very blessed. We can’t say that enough. So we are in a very wonderful position to be able to do this. We’ve always lived within our means. Our children are self-sustaining. This is something that we can do and something we want to do,” said Marsha.

When asked why they decided to finally set up a legacy gift, the Barsmans had a very simple answer, “we were asked.” Marsha said, “We were aware of legacy giving, but never really looked into it. The catalyst really was as simple as someone from the Federation sitting down with us, explaining things to us, and asking if we would do it.”

“And they weren’t asking for a specific dollar amount,” she added. “Nobody’s asking for you to pledge a million dollars. I sometimes think when people hear ‘legacy,’ they think you’re committing a huge amount of money, but it’s really whatever you’re able to give.”

Community members in Cincinnati have committed legacy gifts through the Create Your Jewish Legacy program, and organizations accept a gift of any size or percentage. The CYJL program was established to provide sustainability for our community’s future, and its success is truly in the number of people participating.

Looking towards Jewish Cincinnati’s future, the Barsmans are excited and proud to be a part of its continued success. “Jews have always taken care of each other,” said Marsha. “We are a little island in a very big world, and it’s important to pass on the importance of the Jewish faith, culture, and religion, so we never lose that connection to our shared past.”