Al Miller has spoken to over 3,000 people about the Holocaust just this past year. He hopes “the kids, particularly” take away something from his teaching.
January 18, 2019 | 0 Comments
Tweet
Share72
Share
72 Shares

How You Help: A Holocaust Survivor’s Teaching Changes Lives

I think your words will stick with me for the rest of my remaining life. When you said “Treat others how you want to be treated,” it really hit me. When you said it from your perspective it felt like bolts of electricity running through my body.

—Sincerely, Jimmy (from letter after talk at local school)

In the last year, according to the Nancy & David Wolf Holocaust & Humanity Center, Holocaust survivor Dr. Al Miller has spoken to 3,080 people about the lessons he has learned as a Holocaust survivor, more than any other speaker working with the HHC. He has been sharing his story around Cincinnati, in classrooms and at programs and events, for the last two decades.

That generous gift of Dr. Miller’s time comes with its own small miracle: Miller, who was born in Berlin, is also a gifted teacher. “It’s his passion, his sensitivity, his kindness,” says Sarah Weiss, HHC’s Executive Director. “We are lucky to have him.”

“Dear Dr. Miller, You are an amazing person with a strong soul, and I learned tons with your wisdom. Warm regards and respect. —Germaine

Dr. Miller shares one example of talking with students about their own values by discussing the Pledge of Allegiance: “I say: You are already promising to be fair to people. Chances are that you promised it this morning. They don’t know what I’m talking about. So I tell them: you stood up, you put your hand over your heart, and you said in unison “with liberty and justice for all.” Did you listen to what you were saying, or did you just rattle it right off because you do it every day? What do you mean by liberty? Well, they always say, well that means freedom. And I say that’s exactly right. The freedom that you want for yourself, you’re promising to allow that to all. What is justice— justice is fairness; if you are fair to all, meaning you treat everybody the same, that’s being just. Now, who is “all.” “All” means everybody who you will come in contact with through your whole life. The people you meet, you want to pledge to them, liberty and justice, for all!” He laughs because of his own vehemence.

Dr. Miller began this work “almost by accident,” at 72 years old, but now, at 96, he thrives on it: “I thought I could help,” he says. His first-person, slightly accented storytelling clearly affects the students.

“I could write forever about how much I liked your speech but I can’t put it all in words. I can only say I will always save this experience of meeting a Holocaust survivor, in my heart. —Elizabeth

When asked what makes him a good storyteller, Dr. Miller demurs: “I didn’t know that I was.” But he has done public speaking since his early twenties, and he says, “It comes natural.”

When asked if he’s proud of his two decades of Holocaust education work, Dr. Miller says that “proud” is not the right word, but that rather he gets “a feeling of satisfaction” from the work. “I can’t say really why, it’s not a clear-cut reason. I feel I really want to do and have to do it.” He laughs, “When I go three to four days without a speech now, I call them and say what’s going on!?” His endurance is impressive, and not only in teaching: Dr. Miller still regularly walks in 5k races, and has a shelf full of trophies for winning in his age category. He lives in Mason with his wife Janie. They have three sons, eight grandchildren, and one great-grandchild.

While refusing the idea that the Holocaust has one simple lesson, Miller does emphasize two points in many of his speeches: both are about values. The first is cultural: “You can always evaluate the worth of a society by how it treats its minorities.” The second is the golden rule: He says, “Don’t do to others what you don’t want done to yourself. That pertains to people to any age whatsoever. If everyone would do that, there would be peace the day after tomorrow.”

“My grandpa lived in Denmark during that time and he hid Jewish people in his father’s greenhouse.  He also came to America, you guys could’ve been on the same boat.” —Sam

On January 27, the HHC will mark another chapter in its growth as it celebrates its Grand Opening at Union Terminal. The Jewish Federation is proud to have successfully executed the capital campaign to build the new HHC at Union Terminal. Al Miller will be there for the ceremonies. He says, “I wouldn’t want to miss it.”

Donors to the Jewish Federation support Dr. Miller’s teaching on the Holocaust through their support of the Coppel Speakers’ Bureau at the HHC, which currently coordinates the talks of 16 speakers. 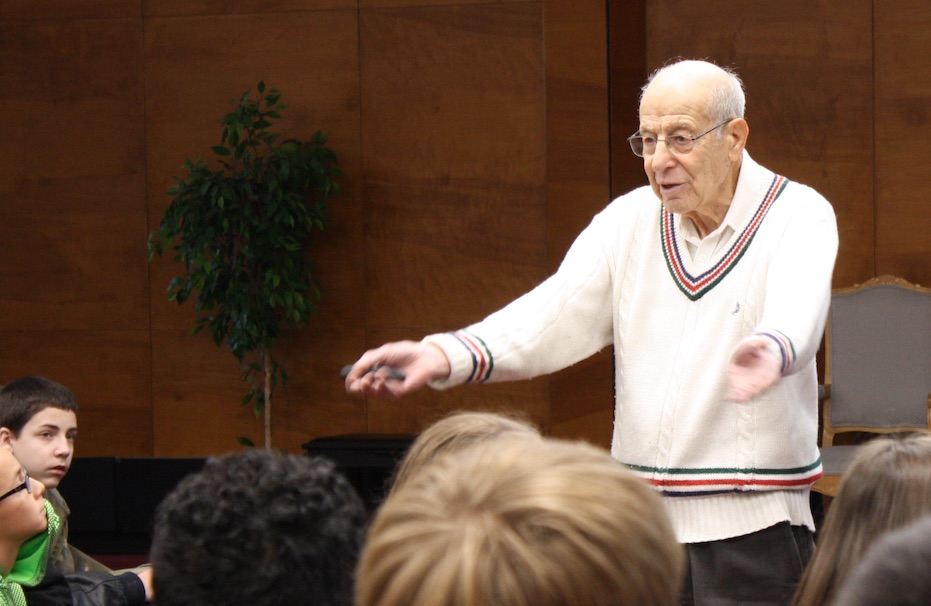 “I could write forever about how much I liked your speech but I can’t put it all in words. I can only say I will always save this experience of meeting a Holocaust survivor, in my heart. —Elizabeth