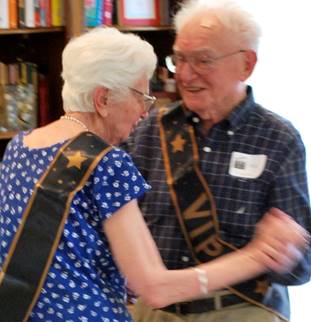 How You Help: Bernard and Stella

“Adele was an invaluable source of wisdom and support for my family and me,” said Leonora about her parents’ Jewish Family Service social worker. “The reason Adele was able to have a really impactful role and help our family during the COVID-19 crisis was because of the five years she spent cultivating a truly genuine relationship with my parents.”

Adele (not her real name) was assigned Leonora’s parents, Bernard and Stella, when she first started at Jewish Family Service in 2015. “They were a delightful couple,” remembered Adele. “They were very reserved, and their trust in me developed over several years.”

Bernard and Stella’s story begins much earlier. They first met at a railway station while traveling from Poland to a detention camp in Russia. At the time, Stella was 11 and Bernard was 13 years old. After being separated for five years during World War II, they bumped into each other on the street in Krakow. Despite living in different countries, they stayed in touch and married in Canada. They settled in New York City, where they raised their family. Shortly after Bernard’s retirement, they moved to Cincinnati to be closer to their adult children and grandchildren. That’s when they became involved with the Center for Holocaust Survivors at Jewish Family Service, which offered them assistance filing for Holocaust restitution, and connected them with medical, audiology, and socialization programs.

How Bernard and Stella Met Adele

Once Adele was assigned to their case, said she would check in with them about once a week, either on the phone or in person. She said the couple was very determined to age in place in their home, and “my purpose at that point was just to make sure they were able to do that safely.”

“Adele invested the time and attention to get to know my parents and really listen to them. Her understanding of them allows her to provide input that has a lot of credibility,” recalled Leonora. “I think any time Adele offered a point of view or suggestion, we all listened because we trusted her completely; we knew she always had their best interest at heart.”

Adele said there was a moment about three-and-a-half years into her relationship with Bernard and Stella that she knew she had become a surrogate family member. “I was getting ready to leave, and Bernard would always help me with my coat, and on this occasion, he hugged me, very tight. That wasn’t a normal part of our relationship, but that hug felt cathartic. No words were spoken, and it’s hard for me to express what that hug meant, but it felt like he was saying thank you for being with us on this journey.”

As Stella’s memory started to falter, it was getting harder and harder for the couple to maintain their independence. After several heart-to-heart talks with Bernard, Stella, and their children, the family decided it was time to move Bernard and Stella into an assisted living facility. “There were a lot of very specific questions that Adele was able to give us guidance on,” Leonora said. “Adele was always available, days, evenings, and weekends. She was a voice of reason who had expert knowledge in aging and dementia, and who knew our family well enough to give us guidance that made sense for us.”

The couple had been in the assisted living facility since January of 2020, and it was in early March that Leonora, during one of her visits, noticed something a little off about Bernard. “He just wasn’t acting like himself,” she said. Leonora picked up the phone to call Adele and ask for advice, whether they should go to the hospital or urgent care. Adele suggested they go right to the hospital, in case he needed to be admitted.

It turns out, Bernard had a tear in his aortic lining, and surgery wasn’t an option due to his age and medical history, so his condition was treated medicinally. Bernard was allowed very few visitors during the week and a half he was in the hospital, due to early COVID-19 restrictions, but the family made sure Adele was able to visit. “He was very weak and a little confused, but he knew who I was, and I was so very grateful to the family for allowing me to do that. That was my last visit with him, the last time I saw him,” Adele said.

Once Bernard was discharged back into the assisted living facility, he began a range of therapies to regain some of the abilities he lost during his hospital stay. After a couple of weeks with very little progress, Adele had a difficult conversation with Leonora about bringing in hospice care. “I normally use a pretty light touch when I make suggestions to families,” Adele recalled. “But in this case, I was pretty firm with them. I wanted to make sure they understood the situation.”

“It’s really helpful to have a non-family member as another set of eyes and input,” said Leonora. “My brother and I were on the fence about hospice, and Adele urged us to bring hospice in to make my dad comfortable in his final days. We spoke to him about it, because we thought he might not be ready, and when I told him Adele really thought it was the best thing for him, I could tell that it meant a lot to him to know that he had Adele’s input.”

By this time, the COVID-19 restrictions were fully in place, and no one was allowed to visit. “It was clear Dad’s time was coming to an end, but we weren’t allowed to visit until he was ‘at the very end of life,’” Leonora said. “It was unfathomable to be separated from him during this time. We called Adele to find out what our options were.” 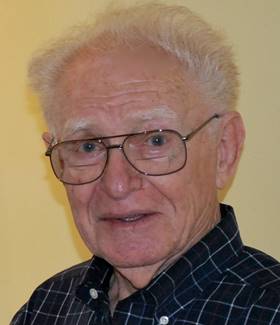 “I’m not one to take ‘no’ easily,” Adele said. “I contacted the management of the facility to find out how Bernard’s family could visit with him. I suggested the staff set up his tablet so the family could video call with him. This was in early days of coronavirus lockdown and congregate communities were just starting to put in place video calls, but time was of the essence for Bernard and his family.”

“We were so delighted with Adele’s creativity and her suggestion to visit with Dad over video,” recalled Leonora. “Because of her suggestion, Bernard was able to say goodbye to his children, grandchildren, family, and friends. And Adele continued to stay in touch with my dad right up to the end and continues to work with my mom. At the funeral, we were only allowed ten people, and we made absolutely sure that Adele was on the list.”

“I was so honored to be there,” Adele said. “But I don’t feel like I have had closure on his life just yet. Because of social distancing, we weren’t allowed to hug each other or cry on each other’s shoulders. You just can’t move on without that physical embrace.”

Leonora agreed, “I don’t think we properly celebrated my dad’s life and grieved in community. We will have a proper celebration of his life when the restrictions are lifted, and Adele will absolutely be a part of that.”

In the meantime, Adele continues to work with Stella and sends her cards and photos. “She loves elephants, and she collects them, so I send her photos of them. I also own a German shepherd that she and Bernard loved, so I’ll send her photos of my dog. The staff at the assisted living facility tell me how much she appreciates those mementos.”

“It’s because it’s tangible. She can hold on to it,” Leonora said. “Phone calls are great, but when they’re done, they’re done. A card, or letter, or photo can be kept, and it can remind her of the people in her life and the love they share.”

Looking back on her parents’ relationship with Adele and Jewish Family Service, Leonora said, “There has been no downside at all. Bringing in a social worker like Adele when there are no apparent problems is wonderful. As people are heading into their elder years, you want to start cultivating a relationship, so when difficult decisions need to be made, you have a history of trust and respect.”

“This family allowed me in,” Adele said. “For whatever reason, the stars aligned, and the relationship unfolded beautifully. There’s not a secret recipe for it, it just happened.”

“I was getting ready to leave, and Bernard would always help me with my coat, and on this occasion, he hugged me, very tight. That wasn’t a normal part of our relationship, but that hug felt cathartic. No words were spoken, but it felt like he was saying thank you for being with us on this journey.”  —Adele, social worker, Jewish Family Service