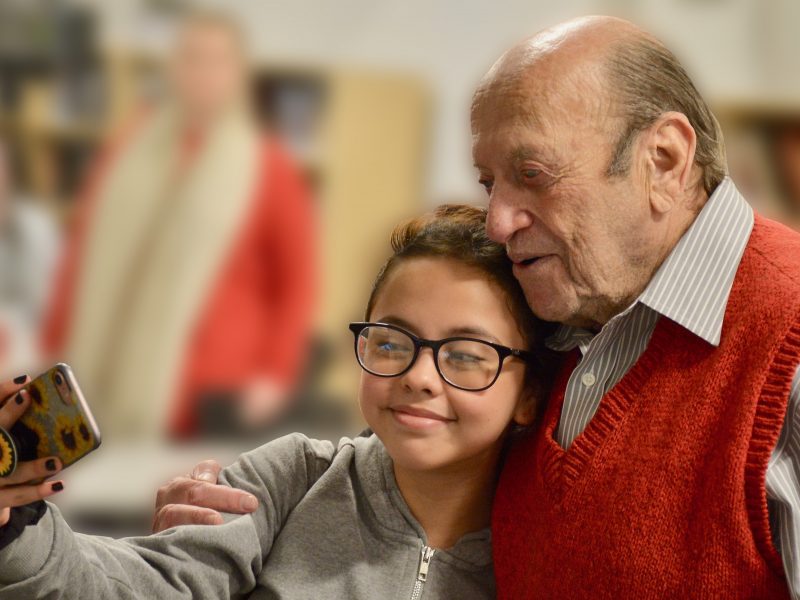 Holocaust survivor and educator Conrad Weiner moved the students from Princeton Middle and High School with his story, and they moved him with their poetry.
November 20, 2020 | 0 Comments
Tweet
Share
Share
0 Shares

How You Help: Holocaust Survivor and Students Give of Themselves

The start of the line

my hands up praying that G-d reverses time

—from “Overboard” by Makayla Baez-Billiter

Poetry as a Gift
Princeton High School senior Makayla Baez-Billiter wrote these lines as part of a poem about the Holocaust. She had learned, for example, about the 800 Jews shot on the banks of the Danube, in Budapest, right before the end of World War II. The next step for her, as part of the class, was to speak these lines live, performed in person, as a gift for a Holocaust survivor.

On February 6, 2020, Makayla and nine other students visited the Nancy & David Wolf Holocaust & Humanity Center (HHC) to present that gift. It was lucky that the encounter took place just before COVID-19 ended most in-person events. Here’s what happened:

A Brand-New Kind of Learning
This was a first attempt at a brand-new learning encounter for the HHC, based on the vision of Makayla’s teacher, Celine Quinn. She was inspired by the Freedom Writers, an organization inspired by a bestselling nonfiction book and movie about supporting underprivileged students’ educational journeys. Celine wanted to empower her own students to engage and to learn. To take the class, students from Princeton Community Middle School and Princeton High School, in Sharonville, had to enter and win a school poetry contest. The class culminated in this trip to the HHC.

There, they were to meet Conrad Weiner. Conrad is a Holocaust survivor who for 13 years has spoken through the all-volunteer Speakers Bureau at the Holocaust & Humanity Center. The Speakers Bureau is funded by the Jewish Federation of Cincinnati. “Conrad is a gifted educator and we are grateful for his work,” said Sarah Weiss, CEO of the Holocaust & Humanity Center. Conrad says his educational goal is ending ignorance. “People,” he said, “generally know very little about the Holocaust, and it’s very important that they learn more about it.”

A Day of Call and Response
Makayla and the others had studied the Holocaust, and had written poetry that spoke of their learning, intertwined with their own life stories. Several of the students had never been to Union Terminal before, much less the HHC. So first, they toured the HHC, and then sat at the front of a lecture hall to hear Conrad.

Seated behind a podium, Conrad shared his experiences as a Holocaust survivor. At age three and a half, he had watched the Nazis kill his aunt and grandmother outside his own front door. Then, with his mother, he was taken by cattle car to a work camp in Ukraine. Their job was to cut timber for the Nazis. He credits his mother’s love and determination for his survival. They were liberated when he was seven and a half years old.

“It was intense. It felt like sharing a piece of history,” said senior Haven Martin. “All we really learned about World War II and the Holocaust was in textbooks and by people who have read textbooks. To be spoken to, rather than to be spoken in front of—it was very nice to learn that way.”

Then they all had lunch together. Despite his gravitas and 81 years of age, Conrad chose to sit and talk with the students, not the teachers.

Gifts Went “Straight to My Heart”
Next, the students—all girls—performed their poetry for Conrad, the teachers, and several HHC and Federation staff. But they spoke mostly to Conrad, who sat front and center, listening intently. Typically, the Speakers Bureau educators give a speech, take a few questions, and are done. But this day was different.

In these shoes, with my mind on the river

Where I know my skin and bones will wither

The river that will be my final resting place

The river where my soul will swim with grace

—from “Number 7” by Brooke Barry

Conrad clapped for every poem. “To say that the event today was gratifying would be an understatement,” he said. And what did Conrad think about the poetry? “The poems I heard today absolutely went straight to my heart,” he said. “I was so impressed with their originality, sensitivity, and how much work they put into the poems. It was absolutely far more than I ever expected.” After a pause, he added, “So that gives me hope that word will spread.”

“It Was an Honor”
The response from the students was equally profound: “We are not forgetting, we are not ignoring,” said Haven Martin. “As someone who’s in one of the very few generations to be able to learn directly from Holocaust survivors, it is incredibly important to me to be able to share their stories.”

“It was an honor to actually hear him and be in his presence,” said Makayla.

After it was over, Conrad and each student hugged and chatted a bit. After the students had left for their bus, he was asked one last question: What did he hope they learned from the day? He replied:

I hope that they learn to be strong, and face against hatred, and most important, against complacency. Against people not caring—because this is how it started.

Still Teaching Despite COVID-19
With the onset of COVID-19, Conrad’s work through the Speakers Bureau has moved online. At Conrad’s most recent online presentation, he spoke to over 150 participants from all over the world, including a graduate student in India, who afterwards asked to interview Conrad for his research. On Facebook his most recent talk has been viewed over 1,000 times.

To learn more about Conrad Weiner’s story: please refer to this article or this video.

To learn more about the Jewish Federation’s allocations process, which funds the Speakers Bureau of which Conrad Weiner is a part, go here.

“It was an honor to actually hear him and be in his presence.” —Makayla Baez-Billiter