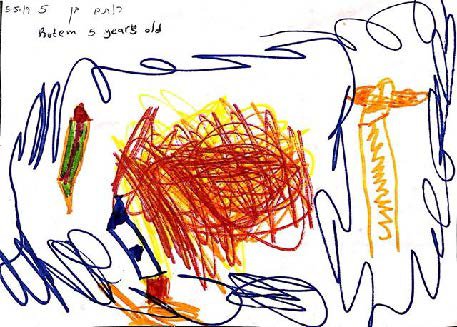 Rotem, age 5, drawing made May 5, 2019. Rotem is one of many Israelis from Ashkelon who have already suffered three "war zone" experiences.
May 10, 2019 | 0 Comments
Tweet
Share
Share
0 Shares

How You Help: Sirens and Sorrow in Israel

Your gift to the Jewish Federation’s Annual Campaign is once again in action supporting our Israeli friends and family during these difficult days with trauma relief and basic necessities through the Jewish Agency for Israel (JAFI)’s Fund for the Victims of Terror.

What follows are powerful firsthand testimonies from Israeli parents and children who endured the latest round of 690 rockets the weekend of May 4th and 5th. They all live in Ashkelon, which is a coastal city north of Gaza, and 31 miles south of Tel Aviv.

The first siren, in this round, caught me at home while I was feeding my little one on her play mat. Her name is Tohar, she is 8 months old, and this is her third “war zone” round or experience already.

Being caught at home sounds good for most Israelis since the shelter is right by us, and I don’t have to worry. The problem was that my husband had just left the house with my two older kids (five years old and three years old). How can I explain the horror that I felt? How scared I was?

I picked up my baby and ran to the entrance of the building, opened the door, and my husband was running towards me carrying both kids. We ran inside and made it last minute. Unfortunately, that’s not what happened. While they were running, my husband tripped and all three of them fell. They got home, crying, shocked and all bruised up.

Neomi, my three-year-old, was in shock all morning. She jumped at every small noise, and during every siren, she would hold my hand tight and say “You will protect me.” She was saying it to me, and trying to calm herself. “The noises scare me,” she says. She keeps repeating the same story of them falling outside, time and time again as if she is telling it for the first time. My oldest, he is already used to it, to this, which is sad in and of itself. It is crazy how this awful situation is a part of our routine.

Living in Ashkelon since 1989, I and my family are used to operations, wars, emergency situations. The last round that started in Ashkelon Saturday at 10 am wasn’t like before, it was more intense, many rockets, the direct hit of rockets and casualties over 35 crazy hours.

What was supposed to be just another beautiful day turned in a second into a nightmare. Our shelter is out of the house so we run and hide under the staircase, in a small corner, everyone, my son (24 years old), my husband, and the dog….nonstop sirens, rockets, interceptions by Iron Dome, rockets that hit buildings…. Noon stop booms, the sound of IDF attacks. War zone.

After rockets all day long the night in Ashkelon was worse.

At midnight, 1 a.m., 2 a.m., 3 a.m., sirens and rockets, this time people were hurt. The last rockets hit a power pole near us so we had no electricity for a few hours. It was very hard to go back to sleep.

The next day my 17-year-old daughter wanted to study for a matriculation exam due Monday. My husband drove her. There were four girls studying in a safe room there. Schools were closed that day, people were told to stay home near safe zones. At 3 o’clock there was an announcement on the news that the matriculation for the southern students was canceled. My daughter asked that we pick her up. I was nervous driving with the on and off sirens so I sent my husband to go and pick her up.

Sure thing, 10 minutes after he left there was a siren!

Once it was over I tried to call them, but there was no service. The minutes passed and they didn’t return, I was getting really nervous. Finally, they arrive. My daughter first and my husband with a big pack of ice cream.

He wanted to cheer her up on the way home so decided to stop at the favorite ice cream place near our house. The minute they walked into the place, the siren went on. They ran to the back part of the store until the siren was over. Got the ice cream and came home.

My son and I are “toshavim chozrim” (returning Israeli citizens), I am a returning Israeli and he is an American that made aliyah. We moved back from Colorado to Israel last August. We moved to Ashkelon because I grew up here and my family is here. Ashkelon is home.

How do you explain the madness that is the reality here? My kid is 13 and this is his third round of “war zone” experience already. We got home last week, after visiting family in Colorado on Passover. After two days of jet lag, all hell broke loose here. Out of the blue, with no warning, 36 hours of staying in the house, sleeping in the shelter room, and checking on loved ones all night long.

What do you say to a kid who has a choice? Who doesn’t have to be here? How do you “sell” this dream of Israel and Israeli childhood when crazy is on the loose every other month, and there is no change in sight? Do you tell him that the trauma will pass? Do you tell him that you will protect him if something happens, even if you know you really can’t—what do you do?

In the midst of the craziness, when sirens didn’t stop, and rockets were hitting, he woke up and said: “I think I want to go home.” I said nothing. I hugged and kissed him as any mother would, and I let him fall back to sleep. How do you justify this to your beautiful boy, when you know, that whatever you decide to do, leave or stay, will take a toll on him and will come with its own price tag.

Yesterday, at 9:00 p.m., my paranoid family, led by my stressed little siblings, decided to “get out of range” and run away to my relatives in the West Bank, far away from any rocket fire. We arrived at 10:30 p.m., barely slept, and got up early in order to go back home.

On our way, we found out that schools were opening and people were going to work and that everything is back to “normal”. Everything is a mess! It feels like the country and the schools are pushing the normal routine and order on us instead of setting it up slowly and surely. In the rush for everything to get back to normal, there’s a lot of anxiety.

In short, I won’t be going to school today, because I can’t make it and because there is a mess everywhere around me. I just wanted to let you know how it all feels to us right now. I suppose you feel it too.

My elderly mom was visiting from South Africa. Luckily, the room that she sleeps in happens to be our safe room. She is hard of hearing and could not hear the sirens, but realized that every time we all ran into her room, morning, noon, and night, we were under fire again. However, she was able to hear the booming of the interceptions and/or rockets landing and exploding.

When we were downstairs, it was not too bad, but our bedrooms and bathrooms are on the second floor. Thirty seconds is very little time to be woken up, realize that the noise is a siren, rush to make sure that everyone has got up and all rush down the stairs into the shelter, close the safety shutters and window and the heavy door! Sometimes the noise or aftershock of an explosion happens before everyone has managed to get in and that shakes one to the bone.

When anyone needed to go upstairs to the toilet or to shower, there was panic. What does one do if there is a siren and you happen to be in the bathroom? I still don’t have an answer. Does one grab a towel and rush out wet, hoping not to slip or fall on the way down? What if you stay in the bathroom and a rocket explodes in or near the house? They say that the bathroom is one of the worst places to be in an explosion, because of all the ceramic and the way that it splinters into shards.

The last siren and rocket were at 1 o’ clock yesterday morning and today life is ‘back to normal.’ Leaving the house is stressful, with thoughts of “what if?” A motorbike riding nearby makes one jump, thinking that it is a red alert siren again. One jumps in panic at any loud noise. Is this what it means to be back to normal?