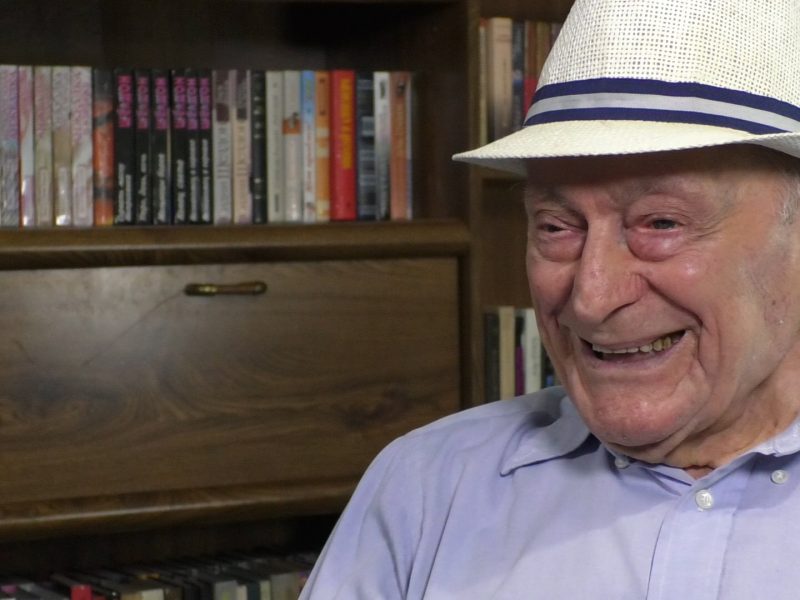 How You Help: World War II Hero Given Dignity and Community

“I can’t imagine my life without the Center,” says Mark Klotsman, via translator. Sitting in a chair at the busy Russian Jewish Cultural Center, Mark looks in his element, wearing a jaunty hat, eyes alert. He is 97 years young, and speaks almost no English, despite having lived in the United States since 1996.

The room where he sits, the Russian Jewish Cultural Center, is a part of Jewish Family Service, supported by the Jewish Federation of Cincinnati, and located in the Mayerson JCC. In existence for two years now, it serves a lively group of roughly 100 Russian-speaking seniors with community, Russian-language activities, and access to translation and interpretation services as well as social services.

A Hero of World War II

Everyone here at the Russian Jewish Cultural Center has a story, but did you know we had genuine heroes here, almost every day? Mark Klotsman—here four days a week—is one such hero.

A Jewish soldier in a country that oppressed Jews and discouraged adherence to Jewish traditions, Mark joined the Soviet military at 19 years of age. After being trained for a year and a half, the Soviets, and so he, entered World War II. He fought for five years, eventually serving as commander of an intelligence division. He and his fellow soldiers endured much hardship, including gangrene and starvation.

Afterwards, even though the Soviets gave fewer to awards to Jewish soldiers, Mark received four of the highest military awards, for personal courage and bravery in battle. He was also awarded 18 medals. His account of the war is recorded at the Blavatnik Archive.

Asked about the war, Mark’s focus is the senselessness of needless casualties. “The victory itself was very great. But the price we paid was too high. More than 16 million gave their lives. And at the battle for the Reichstag, tens of thousands of soldiers were killed on that last day of the war, despite the fact that the city was surrounded and helpless. I cannot accept that, when soldiers were killed for no purpose.”

Brilliant at the Game of Pool

One constant thread from his war days to current-day Cincinnati is Mark’s love of pool. Asked his favorite activity at the Center, Mark immediately replied “Pool!” with a grin. He has played for a very long time; during the war is the only time he did not play. Mark was a member of the Soviet military’s top pool team. Asked if he is a good player he demurs, “I cannot tell about myself.” But then he cheerfully adds, “But of course I am good, I am a master,” to much laughter.

An encouraging community leader, Mark is known for taking old, beat-up trophies, and crafting/upcycling them into awards for the Center’s pool tournaments. He’s also known for usually winning those tournaments, or letting others—on his own team—win them.

Though he emigrated to Cincinnati in 1996, Mark’s English is still extremely limited. He needs help with many basic tasks. His family is loving and caring, but they cannot be there constantly. “My wife died seven years ago,” said Mark. “I live alone. My family, including my daughter, takes care of me. They come, they visit me, but I am still alone.”

That’s why the Center is so needed. Mark needs the company of friends who understand his history and his native language. He puts it simply: “I need this community.”

Mark’s Life is Engaged and Active

Mark’s life is engaged and active. “It is good to socialize with people who came here the same way I did,” said Mark. “I like the library—in Russian. And over here—[he points] Russian music. It’s good for those who don’t speak English. It is marvelous to have this Russian library here. And at the Center we don’t need translation services. Everything is in Russian.”

He goes to the Russian Jewish Cultural Center four days a week. The Center offers lectures, poetry, movies, and simple pleasures like singing and birthday celebrations. It also offers connections to essential social services, including care management for Medicare, Medicaid, social security, and food stamps. Historically deprived of access to Judaism, Mark and others learn about and celebrate the Jewish holidays at the Center and at the JCC.

Asked what his life would be like without the Center, Mark said, “I don’t know how I would feel, or what I would do, if I didn’t have the Center.” He adds, “People here are very kind and really care about seniors. We are provided with a lot of services here, we are supported.”

Mark praises the Russian-speaking staff at the Center, but he also loves his experiences outside its safe walls. “It’s nice to be at the JCC in general,” says Mark, “because as soon as I am in the hallway, they know I am Russian Jewish, they approach me, hold my hand, ask to help me. It’s very nice, I can feel it.” The Mayerson JCC also provides meals and transportation to many who utilize the Center.

Asked why he likes pool so much, Mark laughs, “It is an athletic activity!” He explains how when he plays pool he walks around the table two kilometers per game. In addition, he bends over, to play, “maybe 100 times per game.” “If I am given the assignment to walk five kilometers a day I will never do it [much laughter]. I will never do three kilometers. But here, playing maybe three games a day, and each two kilometers per game, makes six kilometers! And I don’t even notice that—that’s why I am 97!” The interview ends with more laughter.

“I can’t imagine my life without the Center.” —Mark Klotsman