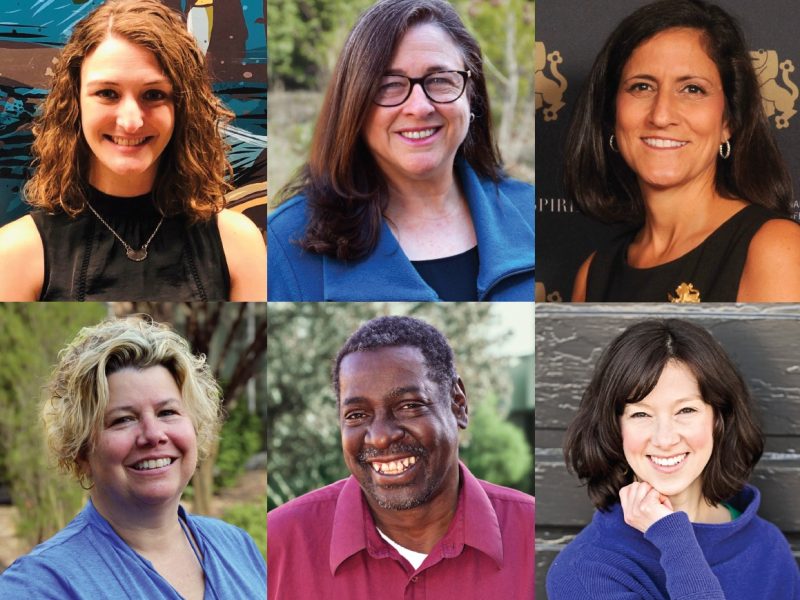 [SEE VIDEO OF AWARDS PRESENTATION, WITH REMARKS BY WINNERS, BELOW]

“I know how lucky I am to work in this community every day.” —Trinity Johnson

On May 12 the Jewish Federation of Cincinnati held its 125th Annual Meeting virtually over Zoom. During the well-attended event, six community volunteers and professionals were honored for their passion, excellence, and contributions to the Jewish community.

The first junior award went to Trinity Johnson, the Development Manager at the Nancy &David Wolf Holocaust & Humanity Center. Johnson has dedicated nearly her entire life to the mission of Holocaust education. Since the fourth grade, she has immersed herself in learning about the Holocaust, including during her undergraduate degree coursework in History Education at Wittenberg University and graduate degree from Stockton University, earning a Master’s in Holocaust & Genocide Studies.

Johnson began her career at the Nancy & David Wolf Holocaust & Humanity Center in 2013, and quickly proved herself as a dedicated professional. She has had a number of hands-on roles at the HHC, including being part of the team that designed the new museum at Union Terminal, and her latest role leading development efforts. In addition to her work at HHC, she has found time to give back to the community and is deeply involved at Adath Israel and with several other community initiatives.

“I am so honored to have worked with the individuals that I have, who, unbeknownst to them, have shaped my work ethic and my leadership.”—Trinity Johnson

The second “junior” Avodah award was presented to Kim Newstadt. Newstadt is the Director of Research & Learning at The Jewish Foundation of Cincinnati. Newstadt has demonstrated vision, leadership, and meticulous attention to detail as the lead professional for one of the most significant initiatives in the community, the 2019 Cincinnati Jewish Community Study. In implementing the Study, Newstadt worked closely with the Cohen Center at Brandeis University, a volunteer Advisory Committee, and senior professional colleagues from the Jewish Federation and the Jewish Foundation.

In her work to explore the applications of data with communal leaders, Newstadt has shown a real passion for surfacing different ways of thinking about Jewish engagement and involvement, identifying pathways for diverse expressions of Jewish identity, and advocating for members of the community who are often on the periphery.

“I am grateful for this award as it is a reminder of the person I aspire to be, and I am moved to be included in the company of the other honorees, many of whom have been on the frontlines ensuring that individuals in our community receive the services and dignity they deserve during this pandemic.” —Kim Newstadt

The first “senior” Avodah award was presented to Susan Bradley Meyer, the Director of Senior Adult Services at the Mayerson JCC.

Since 2004 Meyer has created innovative and award-winning programming for the community’s senior adults, and most recently, during the COVID-19 pandemic, she has overseen a dramatic increase in the volume of meals that needed to be delivered to the homes of seniors in our community. By expanding the J’s meal delivery to new Meals on Wheels clients as well as others who previously would enjoy a hot kosher lunch at the J, Meyer’s team delivered nearly double the meals that they had delivered in 2019.

“As most people know I am very passionate about the seniors, and to be given an honor like this for doing things that I love so much is really an amazing gift.” —Susan Bradley Meyer

The second “senior” Avodah award was presented to Ronnie King. King has worked for United Jewish Cemeteries and Jewish Cemeteries of Greater Cincinnati (UJC) for a combined 22 years. He oversees the burials and maintenance in 25 cemeteries, and leads the grounds staff by example. King regularly gets compliments from families on his concern and compassion.

“I appreciate this award that was given to me on behalf of the community. I appreciate all of the families and rabbis that I am able to help in their times of need. It’s been an honor for me.” —Ronnie King

The Nancy and Robert V. Goldstein Volunteer of the Year award recognizes volunteer leaders who have demonstrated selfless leadership within the Jewish Federation of Cincinnati and in the broader Cincinnati Jewish community.

This year, the Jewish Federation recognized Fran Coleman. Coleman is a longtime supporter of the Jewish community and has held multiple positions with the Federation, starting as a volunteer with the Young Leadership Division in 1992. She participated in Cincinnati’s ATID Young Leadership Development program, then cochaired Super Sunday and worked on a Community Efficiencies Task Force.

After joining the Federation’s board of trustees, she sat on its executive committee and served as Vice President of Leadership Development. Coleman chaired Women’s Philanthropy from 2010 to 2012, and most recently has been cochair of Planned Giving & Endowments, which includes its successful Create Your Jewish Legacy program.

Coleman previously received the Jewish Federation’s Kate Mack Young Leadership Award for her service. She was also awarded the Kipnis-Wilson/Friedland Award at the 2014 International Lion of Judah conference.

“I don’t volunteer for any recognition; I am a believer that no one remembers you for what you did for yourself, but what you did for others. I am very fortunate to live and volunteer in a community where every life matters, and every one can make a difference. It’s really exciting to see what we can accomplish when we collaborate and work together.” —Fran Coleman

The Jay Price Leadership Award honors exemplary volunteers who are actively engaged in both leadership and fundraising positions in Jewish Cincinnati. This year’s award went to Suzette Fisher.

Fisher is a dedicated, generous leader in the Cincinnati Jewish community, and is a past president of the Jewish Federation. She has served on its executive committee, chaired the annual campaign, and served as Vice President of Planning and Allocations.

Fisher is active in the larger community. She and her husband Michael cochaired the United Way 2002 Major Gifts Campaign, and in 2003 they cochaired the United Way campaign. She served on the board and executive committee of the YWCA, and was named a 2009 Cincinnati Enquirer Woman of the Year, and is currently serving on the Talbert House board and on the board of Jewish Family Service.

“Jay Price was a mentor and a dear friend, and he challenged us all to use the talents that made us successful in life to help our community, and to use our Jewish values to heal and help others in need. It is a real honor to be given this award in his name.” —Suzette Fisher

“We are lucky to live in a community with so many astounding leaders,” said Federation president Danielle V. Minson. “This was such a difficult year for so many of us, and it was truly inspirational to see how everyone rose to the challenge to help keep our community strong. I am so glad we were able to come together virtually to recognize everyone’s hard work.”

"[Jay Price] challenged us all to use the talents that made us successful in life to help our community, and to use our Jewish values to heal and help others in need. It is a real honor to be given this award in his name.” —Suzette Fisher