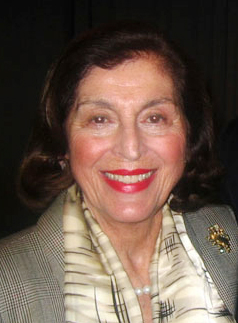 Rhoda Mayerson Passes Away at 98

Rhoda Mayerson, a major contributor to the Cincinnati Jewish community, as well as the greater Cincinnati community, passed away on May 12, 2021 at the age of 98.

“You have to care about what’s going on around you and for you,” said Rhoda Mayerson during an interview in 2014. She was speaking of the importance of community and legacy. She and her late husband Manuel (Manny) Mayerson were major philanthropists in Cincinnati, and in 1986 created The Manuel D. and Rhoda Mayerson Foundation to reflect their motto of “give while you live.”

While it’s hard to mention one without the other, Rhoda was just as active in the decision-making process as Manuel was, and their impact on the community is so profound it’s hard to list all of their accomplishments. However, the couple felt that the most significant grant their Foundation made was to help build the new Jewish Community Center, the Manuel D. and Rhoda Mayerson JCC in Amberley.

The couple also started the Hebrew Free Loan Society in the 1980s, now part of the Cincinnati Jewish Interest Free Loan program, which provides interest-free loans to Jewish borrowers in the Cincinnati area. The Mayerson Foundation’s support has also enabled ProKids, a local nonprofit organization that helps break the cycle of child abuse and neglect, to grow over the past decade.

She and her family moved from New York in 1939 when her father was offered a job in Cincinnati. She then met Manuel and described their life together as a love story. “He asked me if he could take me for a walk to get an ice cream,” she remembered. “Halfway there he turned around and said, ‘Saturday night is Valentine’s Day; I’d like to have a date with you, and every night for the rest of my life.’”

Manuel served in the Navy during World War II and once he returned to Cincinnati, the couple settled into their life together, raising a beautiful family, and helping create a better community for all of us. He passed away on March 22nd, 2012 at the age of 90.

A private, family-only, graveside funeral service was held for Rhoda. Respects can be paid via notes to the family sent to The Mayerson Foundation, or donations can be made to the Cincinnati Children’s Hospital Medical Center in care of the Mayerson Center for Safe and Healthy Children, and to Artswave.

Remembering her first date with her husband-to-be: “He asked me if he could take me for a walk to get an ice cream. Halfway there he turned around and said, ‘Saturday night is Valentine’s Day; I’d like to have a date with you, and every night for the rest of my life.’” —Rhoda Mayerson.