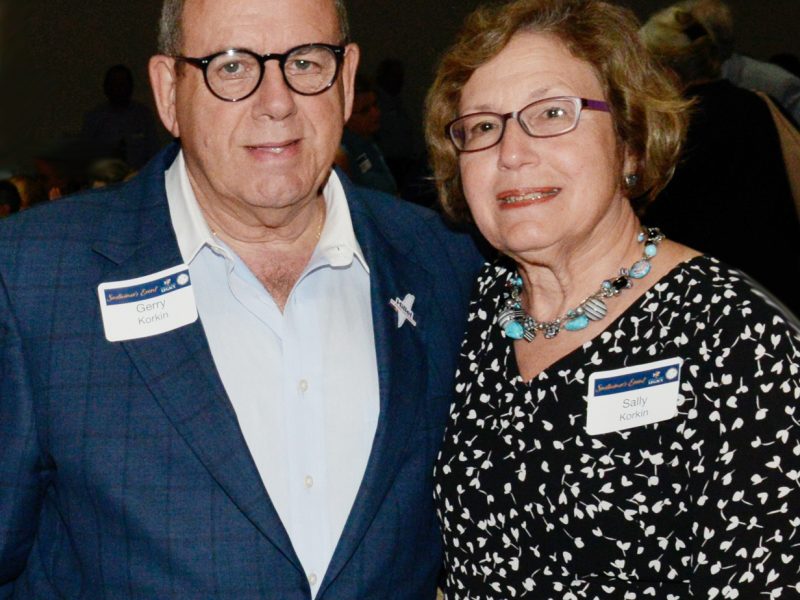 Sally Korkin and her husband, Gerry, enjoying the Jewish Federation’s Sustainers Event, at which she was given the  Mesel Wieder “Mensch” Award.
July 16, 2019 | 0 Comments
Tweet
Share
Share
0 Shares

“To me being a mensch means having a good heart. It means doing the right thing and instilling good values in your children.”

To be called a mensch is the highest praise in our community. On May 29 at their annual Sustainers Event, the Jewish Federation of Cincinnati honored Sally Korkin with the Mesel Wieder “Mensch” Award, which recognizes a person who quietly leads behind the scene in a Federation committee or a Create Your Jewish Legacy team to get things done. They truly exemplify the word mensch.

Asked how it felt to get the award, Korkin said, “I was very overwhelmed, surprised, thrilled, and honored.”

She also received a standing ovation.  Of that, Korkin said, “It was very humbling and very powerful.”

Korkin was nominated by Rockdale Temple Executive Director Karen Martin, who said, “Sally Korkin is a powerhouse.  We are so blessed to have her time, energy, and creativity at Rockdale Temple.”

The award was established in 1999 by friends of Mesel Wieder to honor his memory. They created the award to celebrate those in Cincinnati’s Jewish community like Mesel, who exemplified the meaning of the word mensch. Wieder survived the Holocaust in Ukraine. He was extremely involved in Adath Israel Synagogue and showed his dedication to education through volunteering for Rockwern Academy’s L’dor V’dor program. Wieder frequently attended Holocaust & Humanity Center programs. Wieder passed away in 2010 at the age of 96.

Korkin knew Wieder. “I remember him vividly,” she said. “He was this little man and he would come out to Cedar Village to visit people or to have lunch. And in the midst of anything, just kind of randomly, he would burst into song and sing ‘God Bless America.’”

A lifelong member of Rockdale Temple, Korkin is currently chair of Rockdale’s Create Your Jewish Legacy committee, Rockdale’s Board Secretary, and in line to become President of the Board in 2022, in time for their bicentennial in 2024. She was formerly on Cedar Village’s CYJL committee. Korkin has been a loyal volunteer for the Federation for many years. She also recently gained a new position as a member of the Cedar Village Foundation Board. She has served as a Big Sister to a girl from Russia who came over when she was 12; and has stayed close, attending her wedding just two weeks ago.

Korkin’s professional life has also been one of service to our community. After working at Cedar Village in various roles for 19 years, Korkin now brings her energy and public relations and marketing expertise to Hebrew Union College—Jewish Institute of Religion, working there part-time for three years.

In short, Korkin is extremely busy in her “retirement.” She laughed as she said, “My daughter said to me, you and Dad are the busiest retirees that we know!” Gerry Korkin has also been president of Rockdale, so they will become the first ever couple to each have been its president.

Korkin is rightly proud of her two daughters and five grandchildren. The family’s volunteerism is multigenerational. “Four of my grandchildren have done significant volunteer projects because their parents have carried on the tradition of volunteering, doing the right thing, and helping heal the world [her fifth is only four years old].”

It makes Korkin feel good “to know that we’ve passed these values on. And those values are something that I was taught by my parents.”

Asked what she would say to younger generations about the importance of volunteering, Korkin said, “I think now more than ever it’s really important to be a volunteer. In this world there are so many opportunities where you can help out and follow your passions. You don’t have to be a hands-on volunteer, if that’s something you don’t want to do. But everybody in their own way can be a volunteer.”

“Four of my grandchildren have done significant volunteer projects because their parents have carried on the tradition of volunteering, doing the right thing, and helping heal the world [her fifth is only four years old].” —Sally Korkin, Mesel Wieder “Mensch” Award Winner