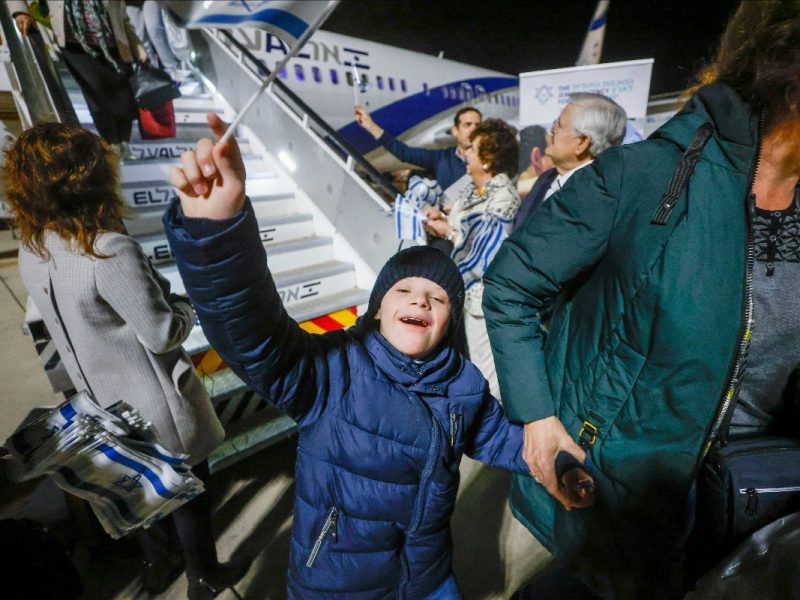 Ukraine: We Promise to Help

“If the world stands aloof, it will lose itself. Forever.” Ukrainian president Volodymyr Zelensky’s words reverberate for all of us. Ukraine’s fight for democracy and freedom is the fight of the Jewish people as well. I anticipate an inspiring speech from Zelensky at 9 am today, virtually of course, to the US Congress.

I am proud of us today. With our help, our Federation partners—the Jewish Agency for Israel (JAFI) and the American Jewish Joint Distribution Committee (JDC)—are already on the ground in Ukraine and at its borders, in Poland, Hungary, Moldova, and Romania, helping refugees. You are providing clothes, food, bedding, transportation, medicine, and other aid. Ukraine has about 200,000 Jews. Through their 18 Hesed Centers, with hundreds of staff, and thousands of home care workers, JDC has been caring for 37,000 elderly Jews, including 9,900 Holocaust survivors. Now they are caring for every Jew they can reach, but focused on the most severe cases. Some home care workers are even living with their clients, walking hours to get to them due to lack of buses, or bringing them to their own homes.

According to JAFI, 10,000 Ukrainians are on the wait list to go to Israel, and on March 6 the first full plane flight left for Israel, with months of paperwork compressed into days or hours, or left undone till arrival. Around 900 olim (immigrants) have already arrived. This compares to 3,000 total olim in 2021. After a harrowing journey, including walking over the border after their bus was stalled, some Ukrainian orphans have also made it safely to Israel. And Jews in the US are petitioning our government to accept all Ukrainian refugees.

After sharing that the city where she was born and raised had been bombed, the head of the JDC for the Former Soviet Union said, “Every dollar you send is saving lives.” Here is everything that the Federation system has done so far.

You are making the idea that all Jews are responsible for one another come alive today.

Refusenik and human rights activist Natan Sharansky, born in Ukraine, recently spoke of this humanitarian crisis. He said that eighty years ago to be a Jew in Ukraine was to be damned. But today, because of the incredible network we helped enable, and the state of Israel, it’s exactly the opposite: “Today on the Ukrainian border a Jew is an unusual word for good, it describes people who have a place to go and there is an entire nation, which is their family, waiting for them outside.”

Locally I am grateful and proud that Cincinnati has raised over $410,000 as part of our national organization, the Jewish Federations of North America’s, commitment to raise $24 million for Ukraine relief. In twelve days we have already raised over $28 million. It has surprised me how many donations we have received from all over the United States. People are really searching for a safe, smart way to give. The dollars raised are a testament to our capacity to mobilize our system to respond to the enormity of the war. One hundred percent of funds will be allocated through Jewish Federations’ core partners to provide critical welfare where it is needed most, and support to protect and safeguard Ukraine’s Jewish community as well as Jews in neighboring countries. Please give here. Thank you again for your generosity. If not now, when?

Our Russian-speaking community, many born in Ukraine and with family members and friends still in the region, is caught up in this crisis. A full nine percent of Jewish households in Cincinnati have at least one Russian-speaking member. I want to acknowledge the effort and grace under pressure of the eight Russian-speaking staff members of Jewish Family Service. Some have relatives and friends in Kyiv and elsewhere, and are still fully present for their clients. The 220 members of the Russian Jewish Cultural Center, housed in the Mayerson JCC, currently have Zoom calls four days a week, and meet in-person on Tuesdays. “They rely on us, now more than ever. We check on them and, respectfully, ask them how they are doing. Sometimes, instead of being cheerful as was typical, they have tears in their eyes,” said Luda Gikhman, Director of the Jewish Family Service Russian Jewish Cultural Center. “Everyone is stressed. People feel this is a shame in the 21st century that people are killing each other.”

Luda told me of families who had found ways to send money into Ukraine through the remaining open Western Union offices. Another family had found ways to send and direct money to family members through the internet. “People are creative,” she said. Some Cincinnati families have relatives who have been able to leave, especially those who already had visas. Some managed to cross the Polish border, one family managed to leave for Israel. Many are still in Ukraine. She said that the staff with connections to Ukraine was so appreciative of the staff of JFS and the JCC for their emotional support.

JFS is working hard to help families and begin to think about the refugee situation more broadly, as it did in the 1990s to help the influx to Cincinnati of over two thousand Jewish refugees and their families from the former Soviet Union.

The story of Zelensky, his Jewishness, and his heroism, continues to inspire me. “I really want you not to hang my image in your offices,” Zelensky said to parliament members during his inauguration speech. “Hang photos of your children there, and before every decision, look them in the eye.”

Before every decision, look them in the eye. Know that we here at the Federation, the Federation system, and the committed and dedicated staff of our international partner agencies, are making the most careful, brave, and ethical decisions possible, and will continue to do so.