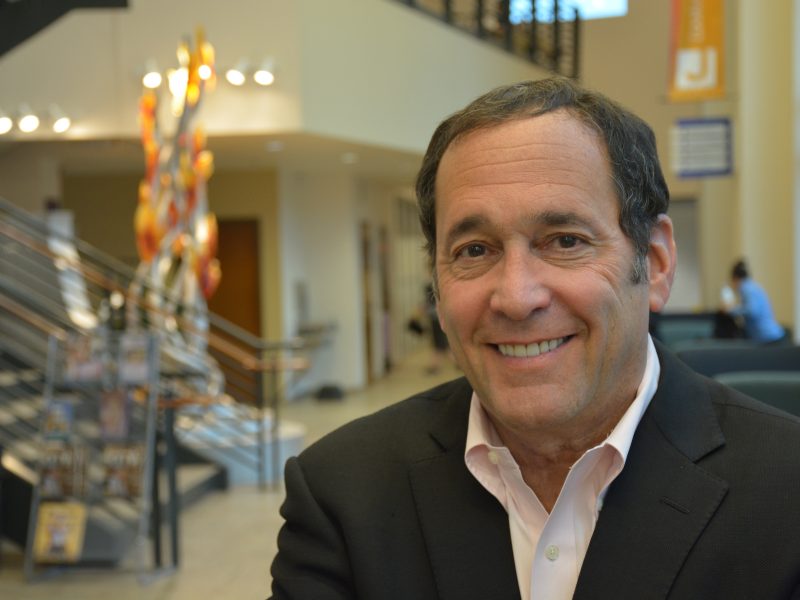 Why I Give:  A Responsibility to Be Involved

Bobby Fisher talks about why he gives back to Cincinnati and its Jewish community.

In the Federation’s “Why I Give” series, I have the opportunity to share why people give to our community.—Danielle

Danielle Minson:  Bobby, why do you give and volunteer in the Jewish community?

Bobby Fisher:  Well, I think it’s simple. We are expected to give back, according to our teachings. And I’ve always had very good role models in my parents and my grandparents, to the extent that they could afford it. One set of grandparents really couldn’t, another set of grandparents very much could, and they were very generous. So that has in part motivated me as well as my parents and observing the vast needs of our community and the broader Jewish community.

But I think also, you have to have it, in a way. You have to “feel it” in your kishkas [Yiddish: something deep within you]—the desire to give back. You don’t have to look too far to see people who need help. So I think that there’s a responsibility to be involved in giving.

Also, I do feel a deep sense of moral obligation to help those who are not in a position—be they Jewish or not Jewish—to take care of themselves. This is one of the principles espoused by Maimonides; we would feel even better if people didn’t know what we gave or who we did it for. I mean it’s really that simple.

Danielle: Is there a motivating incident in your giving?

Bobby:  There’s no incident in my life that motivated me to give: it’s kind of always been there.

One of the things I had tried to do, as I know Arna [Bobby’s wife] has tried to do, and my first wife has tried to do as well, is we’ve always tried to model. You can’t dictate to your children. By actually being involved, hopefully some of that will wear off on our kids.

Danielle: Can you talk about leading, with Arna, the capital campaign for the new Nancy & David Wolf Holocaust & Humanity Center (HHC), to allow it to relocate to Union Terminal?

Bobby: Shep [Englander, CEO of the Jewish Federation] and Sarah [Weiss, CEO of the HHC] came to Arna and myself and said they wanted us to lead that campaign. It brought together two of my true loves and that’s the city of Cincinnati, and the Jewish community. I love Cincinnati, but I know there’s a lot that needs to be improved from many different standpoints including diversity, social justice, inclusion, etcetera. So it brought those two things together and before they left I think we told them “yes” right there. We didn’t even have to think about it. Frankly, we were quite humbled to have been asked.

Danielle: What was the most emotional moment for you during the HHC campaign?

Bobby:  The realization of how broadly this was going to appeal not only to the Jewish community but to the broader community. It is actually unique in the United States that a Holocaust museum is located in an iconic public institution, the Cincinnati Union Terminal. That doesn’t exist anyplace else; it is now part of the civic dialogue.

What’s also really important is that this is not solely focused on the Holocaust. My personal feeling is that it’s the Humanity portion which offers a unique opportunity to learn. It discusses current problems such as responding to genocide, standing up to hate, protecting civil rights, promoting pluralism and learning, and becoming an upstander. The impact that this all can have on us as individuals and as a community is enormous. And the timing is so important relative to what is going on in our society right now.

Danielle: Do you have a specific story about seeing the impact of your volunteering or your gift? Does anything come up for you?

Danielle: You don’t have any memories? No one took you through a program that was helped by Federation?

Bobby: Well, first of all, again, back to Maimonides’s principles, you should be able to give the money and not be aware of the benefits that it hopefully has. In Israel I visited sites that are Federation beneficiaries, but locally here, no, I would not expect to. That would in some respects be undignified for the recipients.

Danielle: Absolutely. Different direction: can you talk about Arna’s and your decision to create a legacy gift?

Bobby:  Legacy giving is a wonderful thing. It is obviously important because whether Jewish Cincinnati can grow and maintain the same economic strength it currently has is always going to be a question. So for people who have the capacity, what a great way to leave a legacy and influence for the community.

For our family, we are often judged by our actions and not our words, so to do something is important. Arna and I have made a legacy gift because we want to leave some recognition of our feelings for the Cincinnati Jewish community and we want to support this community in the future, to the extent that we can. We want Cincinnati to be a Jewish destination city that supports the entire spectrum of our Jewish community.

Danielle Minson: What is the story about giving that you remember best?

Bobby Fisher:  I remember a conversation with my dad. I had been involved with Federation for longer than him at this point, but he had been involved for a few years. He was the chair of the Federation’s annual campaign that year, and that evening I was at a Young Leadership Cabinet retreat caucus. I got a call from him or I called him back [during a break]. He said that he and my mom were thinking about making a gift and wanted to know whether I thought it would be okay. I said to him, “Well, how much are you talking about?” And it was a substantial commitment. And I said, “Nothing would make me more proud and happy.” Dad said, “Alright, we’re gonna do it, great.” I have very, very fond and warm memories of that having happened.

Danielle: What’s your favorite part about being the major gifts cochair for the Jewish Federation’s 2019 Annual Campaign?

Bobby:  Just because. My favorite part about it is hopefully helping this community get back to an awareness of the importance of the Federation campaign.

Bobby Fisher and his wife, Arna, have eight children and 18 grandchildren. They live in Amberley and attend Congregation Sha’arei Torah. Together with his wife Arna, he led the capital campaign for the relocation of the Nancy & David Wolf Holocaust & Humanity Center to Union Terminal this January. He is also on the board of the Port Authority and the immediate past chair of the Cincinnati Regional Business Committee. Together with Adam Symson, he is cochair of Major Gifts for the Jewish Federation of Cincinnati’s 2019 Annual Campaign.

“You don't have to look too far to see people who need help. So I think that there's a responsibility to be involved in giving.” —Bobby Fisher