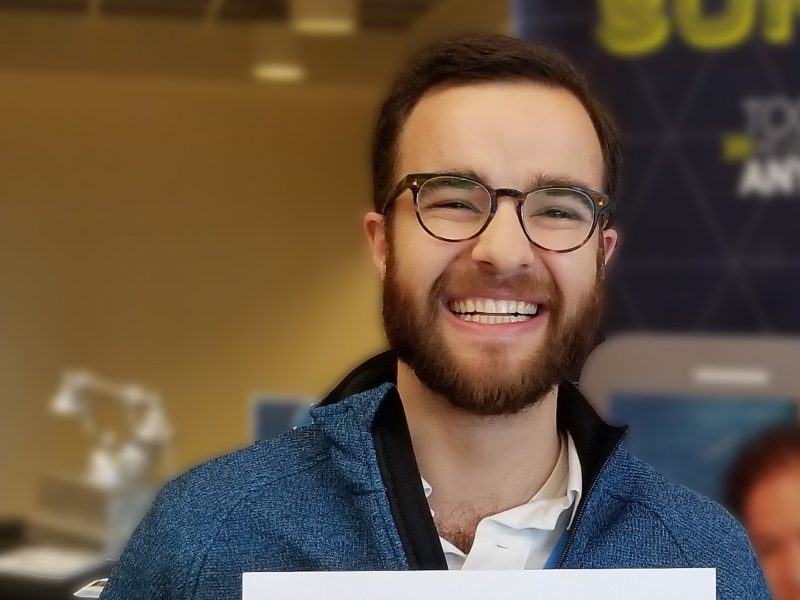 Why I Give: Gratitude

Why does Lev Orlov give and volunteer in the Jewish community?

We are asking people in Cincinnati’s Jewish community to share why they give. Here, I talk with Lev Orlov about why giving is such a big part of his life.

Lev Orlov: We left Russia with the clothes on our back, a couple boxes, and a little bit of money in the bank account. I was three years old when we arrived at the airport in Lexington, Kentucky. My parents and brother, who was 13 at the time, had been learning Hebrew. The plan had been to leave Moscow and move to Israel.

Even though we were headed to Israel, the ultimate goal was always to come to the United States. My mother had been reaching out to a number of organizations, one of them being the Jewish Federation of Lexington.

When we were notified they’d be sponsoring us to move to the US, my parents couldn’t find Kentucky on a map, much less Lexington, but we began learning English and getting ready to come here.

When we arrived at the airport in Lexington my mom wasn’t sure if we were going to have a place to stay for the night. When we got off the plane, instead of sleeping in the airport, there was a huge welcoming party from the Federation to make sure we were taken care of.

Danielle Minson: What was it like for your family, moving to a place where they hardly spoke the language?

Lev: It wasn’t always easy. Both of my parents went back to school in Lexington; they had college degrees in Moscow, but those weren’t worth the paper they were written on. They both changed professions. And look, they didn’t do any of this for themselves. They did it for us. They could have stayed in Russia and they could have raised us there, and life would have been completely different.

So, to me, I feel like any failure in my life is letting my parents down and letting the Jewish community down because they invested in us; they picked us for a reason, whatever it may be. And they saw the potential for success and the potential for a brighter future. And so that’s why I’m forever grateful. My family and I didn’t do this on our own. We did it with the support of the community and those around us.

Danielle: Clearly, the Federation has had a major impact on you and your family. What would you tell someone who is thinking about giving to the Federation?

Lev: Regardless of where you are, whatever the city or the state may be, the Federation is a very important part of your community. It gives people opportunities that they otherwise would have never have, and give people the tools to be successful, to be part of Jewish Cincinnati, or Jewish America. I feel like I’m a living, breathing example of what can come of that.

I was enrolled in Sunday school, they put me in a daycare, and they provided my parents a network group within the Jewish community. In fact, my current employer was part of the group that sponsored our move. When I applied for an internship at his company, I didn’t realize how involved his family had been, and he didn’t realize that I was part of that initial wave of people that got brought over. He had known me when I was three, but didn’t realize it. It’s just amazing how things come full circle.

Danielle: How does your giving help connect you to your Jewish faith?

Lev:  Giving is part of the Jewish community–there aren’t any set expectations, but those who have been around it or have benefited from it understand its power. Of all religious groups, the Jewish people give a disproportionally larger amount, which speaks to it being a part of the “Jewish way” to support our community.

Danielle: What would you say to someone who told you they don’t have enough money to be able to donate?

Lev: Donations can come in many forms and all should be acceptable. It can be as simple as helping a stranger load groceries into a car, or donating a sizeable gift annually to an organization. I give an amount which is meaningful for me, along with giving my time by volunteering and serving on boards. By giving time you are able to have an impact in the direction of the organization, along with the benefit of seeing the work being done firsthand. It comes down to what is important and meaningful to you and for each person that will be different.

Danielle: If a friend asked you why you are so passionate about giving to the Jewish community, what would you tell them?

Lev: I’d say, by giving we can continue to grow our community and services which are offered to those who are in need. You can show those people the world isn’t all bad; that it’s filled with good people. I don’t think I’d be where I am today if it wasn’t for the giving of the Jewish community. I feel like it’s my turn to give back and help those that are less fortunate and help grow our community into everything it can be.

Danielle: If you could sum up the reasons you donate in one word, what would it be?

Lev: Gratitude. A few years ago, during the Passover Delivery we stopped at a Russian speaking home to drop off their package.  Once they realized I too was Russian and Jewish it was like I was in my own grandmother’s house.  They invited me to sit down for tea and discuss our life stories.  It allowed me to see firsthand that we are not all so different – if I had closed my eyes and listened it would have been as if I was back at my grandparents’ home.

Lev Orlov is the Acquisition Manager for Viking Partners and is currently the Ohio State Chair for ICSC Next Generation where he coordinates events for young real estate professionals. He is actively involved in the local community, serving as the treasurer of JVS Career Services, a board member of Jewish Family Service, and board member of LEAD (which gives young professionals an opportunity to meet community leaders and learn about the numerous agencies and organizations which make up Jewish Cincinnati).

“I feel like any failure in my life is letting my parents down and letting the Jewish community down. My family and I didn’t do this on our own. We did it with the support of the community and those around us.” —Lev Orlov