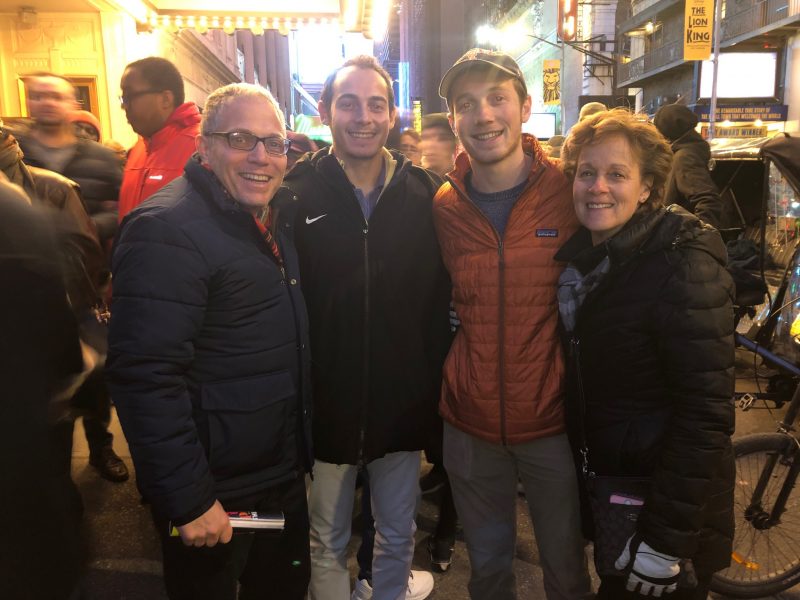 Robert and Marcy Klein (pictured with sons Jay and Jonathan) believe that giving to the Jewish community is less about resources and more about priorities.
August 31, 2020 | 0 Comments
Tweet
Share81
Share
81 Shares

Why I Give: “I Get to Be Part of Someone’s Mitzvah!”: Why Robert and Marcy Klein Are So Passionate About Jewish Cincinnati

A Simple Place in the Community

“I have a simple place in the community,” said Robert Klein, “but I’ve always done what I can for it. I don’t hide in a corner. Instead, I raise my hand and say, ‘I’m interested, how can I help?’”

For Robert and his wife Marcy, being an active part of the community was never not an option. “We were both on board with it, and we understood that it was important even before we were married. Unfortunately, like many young couples, we didn’t have a whole lot 29 years ago. We have more resources today, but back then, we still cared and wanted to help.”

Robert was born and raised in the Cincinnati Jewish community, with both sides of his family arriving at the end of the 19th and early part of the 20th centuries. “I grew up in Amberley Village,” recalled Robert, “and I went to Walnut Hills. And so did both of my parents and my siblings, and many of my cousins. We all went to Walnut Hills from the 1940s into the early 1980s.”

Robert points to his parents as a major influence in his Jewish life. “I deeply loved my parents and respected them. They taught me so much about their Jewish values, the things worth valuing, how to view your community, how you treat others.”

He said he got his first view of the larger Jewish community when he was ten years old and visited Camp Blue Star in the Smoky Mountains for the first time. “I got down there and was around other Jewish kids, and I thought, ‘Okay, I want to be a part of this.’ Your family always tells you lots of things, but until you’re off on your own, you don’t really get it. That first camping experience for me was profound.”

A few years later, when he was in high school, Robert visited Israel for six weeks with the United Synagogue Youth Group. “It was an absolutely amazing experience—this connection with our people. And it occurred to me at that point how very important being involved in Jewish life was.”

Meeting Marcy and Raising a Family

Robert attended Indiana University and was active in Hillel there, so when he moved back to Cincinnati, he started attending services at University of Cincinnati’s Hillel. “Someone there set me up on a date. It turns out that girl was Marcy’s best friend. And through her, I met Marcy, so it all worked out.” (Robert added that he and Marcy later introduced that friend to her now husband of 29 years, so it doubly worked out.) Robert even served as President of UC Hillel many years later, noting, “I thought it was an important thing to do, a way to pay it forward.”

The couple has been very active at Wise Temple over the years, with Robert fulfilling the role of President of both their Young Adult Congregation and their Brotherhood, and in addition, he has taught Sunday school there for over 25 years, among other roles. “It’s just another way to give back,” Robert said. “I love teaching the kids to learn and care about Israel and our history. I believe Jewish history is different from other histories because it’s a living history. The kids have to decide to engage with it; they have to buy into it. Otherwise, the chain will break.”

Robert said he loves to teach, but questioned Wise Temple’s decision to bring him on as a teacher. “When I was growing up at Adath Israel, I would lose interest easily. The educational office probably has a stack of papers three inches thick on the number of times I was sent to the office. So when Wise offered me a position, I remember saying to the rabbi who hired me, ‘Are you sure you want to hire me?’ and he looked at me said, ‘Of course I want to hire you.’ I told him about my time at Adath, and he laughed and said, ‘Robert, we’re going to hire you.’ So at least I gave full disclosure before they had me come on board.”

Robert is also very engaged as a volunteer at the Federation, often making phone calls to help raise money. “I view making those calls as a privilege. I’m getting the privilege of being part of a mitzvah with somebody else. But I also believe the only way that you can teach your children to do these things is by actually doing them yourself. You can tell children about the importance of community all you want, but when my two sons hear me making phone calls, they know what I’m doing. They know their mom and I care about this, and I want them to see those actions, so they model these things later as adults. ”

The Kleins’ oldest son, Jay, recently graduated from DePauw University in Indiana and is currently pursuing a career in professional soccer. Younger son Jonathan is studying chemical engineering at the University of Illinois, “and has become quite an avid Frisbee golfer,” Robert said with pride.

He said both of the boys get their athletic prowess from Marcy. In addition to her athleticism, Marcy has been an active supporter of the Jewish community. She interned at Wise Temple and later worked at the JCC and Cedar Village, before deciding to stay at home with their sons. “Marcy is a perfect complement to me,” said Robert. “She might not be the one who’s the most comfortable making a call for raising money, but she’s very outgoing and loves to network. So we each have complementary things that we’re doing.”

Losing Both of his Parents During COVID-19

“Like so many families during COVID-19, our boys moved back in with us, and we have to relearn our household routine,” Robert said. But that’s not the only major change caused by the pandemic–he lost both of his parents since the lockdowns began in March.

“We lost my mom first,” Robert said. “It was heartbreaking. My dad was at that funeral, and we couldn’t even throw dirt on my mom’s grave. It sounds trivial, but it’s a simple moment that we couldn’t have. There were several of us, but we were all 50, 100 feet from each other at the cemetery. We couldn’t comfort each other. It was surreal.”

He said the last moments with his mother were difficult because hospice would not allow the family to visit until she was in her final moments. “On the very last day, my sister and I each got a turn to hold her hand and be with her.”

Robert lost his father two months later, and he said that situation was also very surreal. “He was living at the Kenwood, which was on lockdown, but we had in-home hospice care for him, so we were allowed to come in, as long as we followed all of the rules the Kenwood had in place. My siblings and I were able to be with him during those last few days, so that felt a little different from when Mom died.”

He said for anyone losing loved ones during COVID-19 it will leave a lasting impression because the grieving process was interrupted. “I’m very, very sympathetic to anyone that’s going through this, but those memories will be there permanently. They’re like little scars that we all share, that somehow bind us all together.”

But Robert can see the silver lining, even in times of grief and loss. “Admittedly, it has been a very sad time, but I’m overwhelmed by how many people have reached out. It just reinforced everything Marcy and I knew about our community. We are so grateful to be a part of this.”

Being Jewish Connects Us to the World

Robert and Marcy have been giving consistently for nearly thirty years, and because of those decades of giving they are now recognized as members of the Silver Circle Society, which honors those community members who have given to the Federation for 25 years or more.

When asked how they’ve been able to do it for all of these years, Robert paused for a moment, thinking. “For most of us, life doesn’t throw an even flow of resources at you, and that can be the hardest thing when you’re trying to give. You have to recognize that and work within that framework to figure out how, as a family, you can continue to function and continue to fund the community. It is a balancing act for all of us, but you have to decide ahead of time that it’s a priority because you’re going to spend years—decades—in the community.”

Robert said the Jewish community doesn’t just stop at the edge of town; it’s a way to connect with people all over the world. “I was in Denmark last year, and I’m standing in this beautiful old synagogue, and I decided to chant a couple of words out from my bar mitzvah, and suddenly the cantor came running out, asking me who I was. We introduced ourselves, and it turns out that was the starting of his bar mitzvah as well. We became instant friends, and it was amazing.”

“We have this wonderful thing–each other. We were given a Torah, but the Torah without each other is not relevant. I believe in the power of all of us. We were given this gift, the power of discussion and dialogue, being part of this greater community. That’s what makes us who we are.”

Robert emphasized his pride in the Jewish community. He pointed out that when he travels for work, he will often seek out the local Jewish communities. “When I’m in cities like Seattle, Washington, or Austin, Texas and I’m describing to these people what we have back in Cincinnati, eyebrows go up. We have something really, really special going on here, especially for a city our size. Our community has built these very durable, wonderful organizations that we’ve decided to all get involved with, and the whole thing is a virtuous cycle, and it just feels right.”