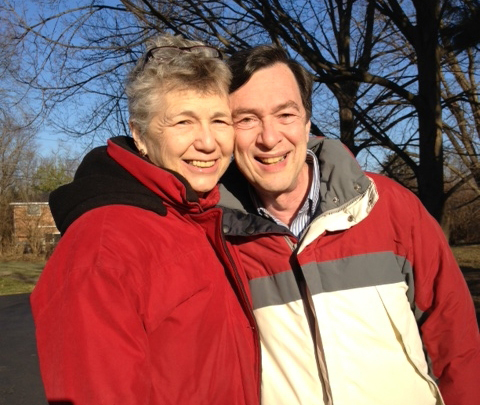 Rabbi Dr. Richard Sarason and his wife, Anne Arenstein, originally bonded over their shared Jewish values and their love of the arts. Both passions have added depth and meaning to their lives, so they have been consistent and grateful givers to the Jewish community and our local arts organizations.
December 24, 2020 | 0 Comments
Tweet
Share
Share
0 Shares

Why I Give: “We’re all connected:” Why Giving Back to the Community is a Must for Richard Sarason

The Detroit native moved to Cincinnati 42 years ago when he took a faculty position at Hebrew Union College – Jewish Institute of Religion (HUC-JIR), and he has stayed on at HUC-JIR ever since, becoming director of the Pines School of Graduate Studies five years ago. He met his wife, Anne Arenstein, shortly after he moved to town while they were both attending a High Holiday minyan (public Jewish prayer service). “We met there, we announced our engagement there, and our sons grew up there. It’s been a very important part of our life.” When the couple got married, Rick noted, Anne didn’t want to change her name, “So we agreed, and no one has ever called her Rick,” he said with a laugh.

Rick received his undergraduate degree from Brandeis University, and then completed his rabbinic studies at HUC-JIR, as well as at HUC in Jerusalem. “Anne and I found out later that we had both studied in Israel at the same time. I was there for two years, she was there for one year. We were both at Kol Nidre services at HUC when the hazzan fainted. You remember those kinds of things,” he said.

“Anne and I connected over our shared personal values, our shared Jewish values, and shared interests in music, theater, film, and literature.” Rick’s interest in books was apparent as he showed his impressive personal library behind him during his interview on Zoom, and when he spoke passionately about the various treasures that can be found at HUC-JIR’s Klau Library and American Jewish Archives.

Rick’s wife Anne spent her career working in museums—starting with the Cincinnati Natural History Museum/Museum Center and then the Taft Museum—as well as writing arts features for CityBeat, and conducting interviews for WVXU’s “Around Cincinnati.”  They are strong supporters of the local arts in addition to the Jewish community.

In fact, Rick said it was his interest in music that first got him involved in Jewish liturgical life. “Singing in the junior choir at our congregation—vocal music was a big part of my family growing up. I still sing to this day. Anne and I are both choral singers.”

“I was the first grandchild on both sides of my family to observe a bar mitzvah, and my bar mitzvah year was the same as Israel’s.”

“Growing up, I always had the sense that being Jewish was special. Being Jewish simply means being me. We’re called to strive for something better: to be what human beings ideally should be—with and for each other.”

When he accepted the job at HUC-JIR after receiving his Ph.D. from Brown University and teaching on the faculty there for three years, Rick said he immediately got involved with Jewish life here. “I had given to the Federation when I was a rabbinical student. When I joined the faculty, I got involved with Young Leadership at the Federation. I served as the president of Young Leadership for two years and also joined UJA Young Men’s National Leadership.”

As president of Young Leadership, Rick sat on the Federation board, and was heavily involved as a campaign volunteer and team leader. “There was also a period when I helped out with the Federation campaign among the academics in Cincinnati—professors at HUC and at the University of Cincinnati.”

“Because of the tremendous community support it receives, Cincinnati’s Jewish community bats above its size,” Rick said. “There is so much that Federation and The Jewish Foundation are doing right now, it’s amazing. They are building quality of life, building communal connectedness. It’s important to come together, to be together, and to do things together. We’re not just a community, we’re a family.”

Anne and Rick have two adult sons, Yoni and Michael. “We raised our boys to have strong Jewish values, and they are both Jewishly involved. Not always institutionally, but involved nonetheless. In fact, they came home this year because it was important to them to spend the High Holidays with us—that’s something that we don’t take for granted.” Rick also shared how they regularly met on Friday nights for family Shabbats on Zoom during the early days of the pandemic.

“While I identify religiously with the more liberal wing of the community, I see myself first of all as a Jew. And I’m interested in the health of the entire Jewish community. It’s really important for people to see firsthand the good works our community agencies are doing, because when you see what these agencies do, then obviously you support them.”

Rick admits he’s not quite as involved now in community work as he used to be, due to professional commitments taking up more of his time, but he still gives, when and how he can. “If you benefit from something, then you have to be willing to give back,” he explained. “In the same way that I donate to public radio or to the arts organizations that I value, I give back to my Jewish community.  It’s a matter of putting your money where your mouth is: of taking responsibility and not walking away from it.”

“I believe in supporting the things that I value. It’s important to come together, to be together, and to do things together. We’re not just a community. We’re a family.” –Rabbi Dr. Richard Sarason