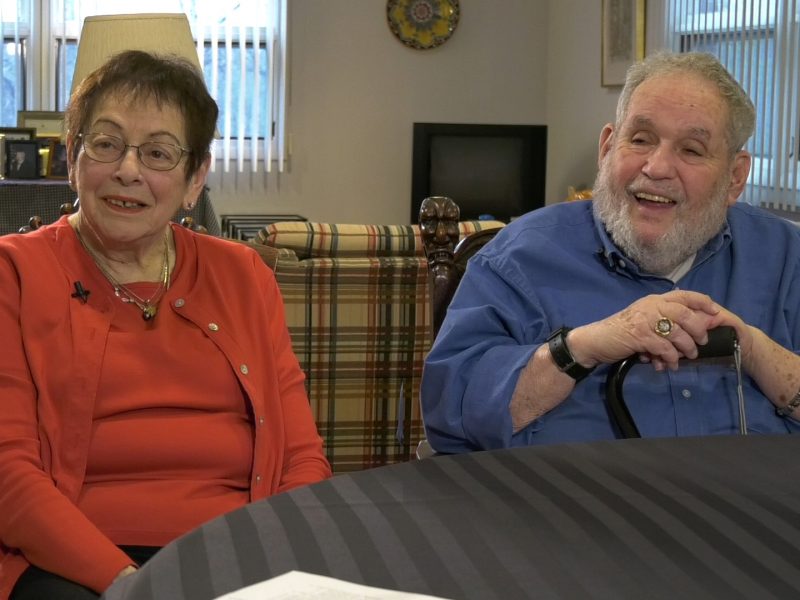 Despite not always agreeing with every choice, Zelda and Lou Jacobs have made it a point to support the Jewish Federation because they believe in the good work the organization does.
February 28, 2020 | 0 Comments
Tweet
Share2
Share
2 Shares

Why We Give: Nurturing the Community to Honor the Past, Provide For the Future

As I walked into Zelda and Lou Jacobs’ house, I was greeted by the amazing smell of chicken soup. I was instantly reminded of all of the Shabbat dinners I had spent around this very table, and my great-aunt Minnie and great-uncle Aaron’s table before it.

“It’s nurtured us,” Zelda told me. “We have children and grandchildren, and now a great-granddaughter. I want them to have the same commitment to Jewish living and Jewish life. Even though they are spread out all over the world, I hope the Jewishness has followed them.”

Zelda and Lou have spent their entire lives in Cincinnati. “I grew up in Avondale, which was a wonderful, wonderful neighborhood,” said Lou. “I went to Avondale School; there were about 800 students, and only about 30 of them weren’t Jewish.”

Zelda also went to Avondale School, but the couple didn’t meet until they were teenagers. “Lou and I met at the Jewish Community Center on Harford Avenue. It was a hot summer day, he was playing baseball, and a friend introduced us. I had just turned 15, and we were married five years later. It’s been a good time, and we’ve always been involved in the Jewish community in one way or another.”

Lou was the president of the Bureaus of Jewish Education, and Zelda was on the executive committee at Jewish Family Service. She has also been involved in membership at Adath Israel for more than 25 years. “I always had the feeling that nobody should come into the synagogue and leave feeling that nobody noticed them. So Lou and I sit in the back row, and I watch who comes in. If someone comes in alone, I make sure to talk to them. I want to make sure they feel welcomed.”

I remember attending Shabbat dinners at Zelda and Lou’s house, and there were always large groups of people made up of family, friends, and people who are new to Cincinnati. “Hosting Shabbos dinner was always important to us; even today, we often have 30 or 35 people around the table. Whenever a rabbi would say we have someone new in town, we would host them. I like having strangers at the table. That’s just been my way, and hopefully my children and grandchildren will do the same.”

When I asked Lou why he has always made it a priority to give to the Federation for all of these years, he gave me a frank and candid answer: “We’ve been fortunate. Even though we don’t always agree with the choices of the Federation, we realize it does enough good work to make it worthwhile to support it. I guess that’s part of giving; it isn’t that every dollar that you give goes toward something that you think is good, you have to look at the overall picture and say, ‘does most of the money I give go toward good causes?’ And if it does, then it’s your job to give what you can. It doesn’t have to be a whole lot. It can be whatever you can afford, but you have to give what you can because someplace along the line, somebody else gave to help your forebears get their foothold in this country, in this city. It’s kind of a duty.”

I asked Zelda and Lou if they remembered the first time they gave to the Federation, and they both laughed and said no, that it was a long time ago. Then Lou shared a story about how, during the 1930s, a Jewish man would come to their home to sell thread, needles, and candy. “He was always wearing the same overcoat and fedora. That was probably all he had when he left Europe, where he had been wealthy.” Lou went on to say that even though his family didn’t have much to spare, “my mother would always scrape the bottom of her purse to find a few coins to give him as he tried to make a living for his family because that was the right thing to do. It’s a tradition that isn’t broken very easily. And by the way, when people come to Cincinnati now without a penny in their pockets, the Federation is here to help them so they don’t have to go door-to-door to beg for coins so that they can exist.”

“If we don’t help others, who will?” asked Zelda. “We just created a legacy gift at Adath Israel so I can help take care of someone else’s children because somebody else did the same for me. We have to be part of the community and what it does. We have to take care of each other.”

“You also have to take care of other non-Jewish organizations,” Lou said. “We’ve been blessed to be accepted by Cincinnati, and we have to make sure we show our thanks and appreciation to those organizations as well.”

At this point, my conversation with Zelda and Lou was coming to an end, but before we said goodbye, Zelda was sure to fill a plastic bag full of freshly made cookies for me to have on the ride home. “It’s tradition. It’s what we do.”

“You have to look at the overall picture and say, does most of the money I give go toward good causes? And if it does, then it’s your job to give what you can.” –Lou Jacobs