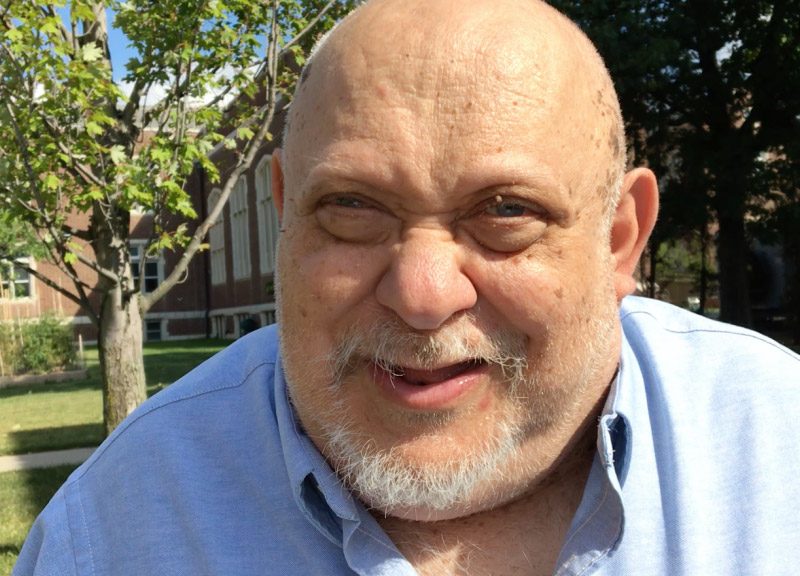 Marvin Moss has followed his mother into advocacy for the disabled, and is now, with the help of Jewish Family Service, following her footsteps back to Judaism.
January 26, 2017 | 3 Comments
Tweet
Share133
Share
133 Shares

How You Help: Meet Marvin: Following His Mother into Disability Advocacy and a Jewish Life

“Teachers said: people like you do not do anything. My mom said: he will be a good person,” recalls Cincinnati native Marvin Moss.

Now 71, Marvin is living proof that mom was right.

Outgoing, with a sparse white crew cut and a goatee, Marvin sits, relaxed and ready for an interview, in the activity room of Jewish Family Service Barbash Family Vital Support Center in Clifton, photos of his brother and parents on a nearby countertop, and sporting a large brass belt buckle displaying the Hebrew letters for shalom.

Asked about his mother’s history, Marvin said, “My mom helped start the mentally retarded agency for kids in the 1940s when I was a kid, and helped start the Jewish Center in Avondale.” Marvin’s parents died in the 1980s, and his best friend and older brother, Leon, who was profoundly intellectually disabled, died six years ago.

Marvin has followed his mother’s footsteps into disability advocacy, but is only now returning to Judaism, thanks to the wellness and socialization activities as well as the food, both kosher and non-kosher, from Jewish Family Service.

A history of disability advocacy, thanks to mom 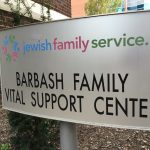 “I have been helping people with handicaps all my life,” says Marvin. Like mother, like son. Dorothy Moss helped found The ARC of Ohio, which advances the rights of Ohioans with intellectual and developmental disabilities and their families. Her internationally published book, How to Teach the Mentally Retarded the 3 R’s, was progressive at a time when normative practice was to ignore or institutionalize the intellectually disabled.

Marvin is currently an advocate for Hamilton County Developmental Disabilities Services, teaching the history of people with disabilities. He was the first person with a disability on the board at APSI (Advocacy and Protective Service, Inc.), and served there for 10 years. After a 15-year struggle, Marvin became the first family member with a developmental disability in the state of Ohio to get shared guardianship along with APSI. This allowed Marvin to jointly make decisions about his brother Leon’s care after his mother’s death. In 2007 Marvin went to Washington and spoke with Senator Ted Kennedy, who had a disabled sister Rosemary, to advocate for a law that would help siblings support siblings with disabilities, as Marvin had done.

Marvin has served on two national, six state, and many local committees. “When I attend meetings,” he said, “I feel my mom is with me and I ask questions that I am not sure where they came from.”

Leaving and coming back to Judaism

In the realm of Judaism, Dorothy’s example is also important. Asked why he comes to the Barbash Center, Marvin said, “My mom helped me to learn about the Jewish [tradition], now I’m going to the Jewish Family Service to learn more about how to help myself be a better Jew.”

However his personal Jewish history has been difficult. Marvin is visibly upset as he tells the story: when he went for his bar mitzvah in 1958 his rabbi told him, his dad, and grandfather: “Why are you here doing this, people like you don’t need to be here.” Even in the 1980s, prejudice remained: “When my dad died, one of the rabbis I know said people like you don’t need to learn to say the prayer over the grave site.” Quiet for a minute, Marvin still seems stunned.

But when asked how his mother and father reacted, Marvin is calm: “We took it in stride. My mom said, ‘You can learn it one of these days’—and I’m doing it today.” He breaks into a big smile. “I’m going to the Jewish classes to learn more about the Jewish religion what I never had growing up.”

“The Jewish community has become more accepting of people like Marvin, thanks to the work of Hope Bard and Kesher, whose mission was to teach Jewish organizations how to include people with differently-abled needs,” said Fran Gafvert, Jewish Family Service Vital Service Department director. “Marvin was fond of Hope and worked with her to help normalize differences.”

Asked what is pulling him toward Judaism these days, Marvin said, “I need it. And I’m coming back.”

Helped in many ways by the Jewish community

“Marvin has been coming to the food pantry since we first opened in a synagogue basement in 2004,” said Gafvert. “But now he participates in activities at Barbash Center for socialization and connection that enhance his well-being. He comes to holiday celebrations, to luncheons, and Hebrew classes, and about once a month to shop for food in our Heldman Family Food Pantry. We connect people to public services, and provide financial assistance, classes from computers to Hebrew to budgeting, community connection, exercise, and more.”

Asked if it felt inclusive, Marvin said, “I come here now, and I feel like I’m a person here, now.”

Jewish Family Service is not his only Jewish space; Marvin likes attending Wise Temple. “I do the yahrzeit for my parents and my brother at Wise,” he said.

“I think he enjoys getting back into the Jewish family again. I think he missed that for a long time,” adds Jeannette Garibay, his aide from Envision, who has helped Marvin with his daily in-home and transportation needs for years.

Asked if there’s anything else he wants to say, Marvin replies, “My mom taught me to help people, every day I’m dying to do it.”

Thanks to you and the help of our partner agencies, Marvin has food, improved socialization that enhances his well-being, and a renewed connection to Judaism.

Asked if it felt inclusive, Marvin said, “I come here now, and I feel like I’m a person here, now.”