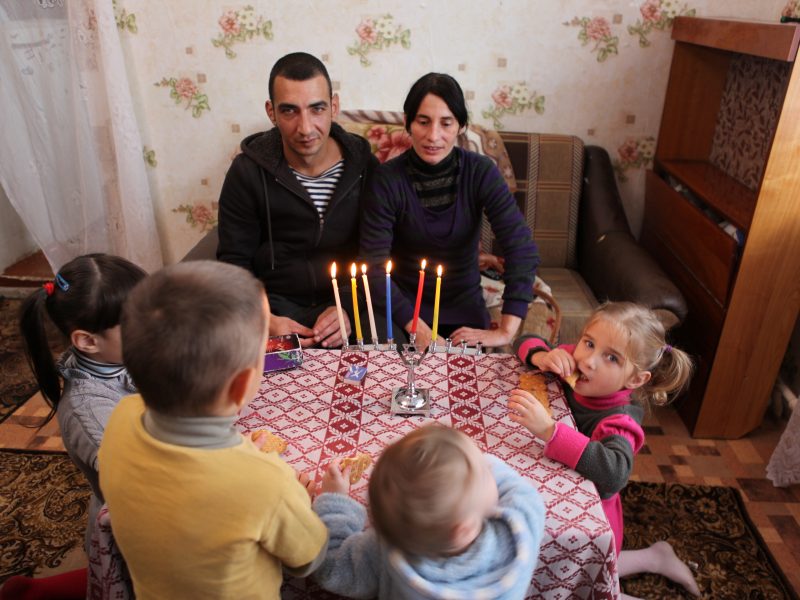 How You Help: Igor and Tatiana: One Family’s Story of Hope

Igor and Tatiana: One Family’s Story of Hope Transcript:

Igor Bekker: I want to give them what I never had: a college education, a more dignified future.

Narrator: Igor and Tatiana live with their five children in two small rooms in Bendery, Moldova. Igor, like many Jewish parents here, is chronically unemployed as his country faces financial crisis.

Igor Bekker: My wife was in the hospital. I knew there were no jobs around here, and if I did pick up a job here or there, it still wouldn’t be enough to pay for my wife’s medicine—and I had to feed the kids.

Anna Kondrashenko, Director, American Jewish Joint Distribution Committee (JDC)-Supported Hesed Tiraspol: He called to see if he could come in. I talked to him like he was my son. I wanted him to feel that we would take care of him and his kids. First and foremost for me were the kids. We try to help them in any way we can.

Anna Kondrashenko: There are a lot of children like this: families with many children, poor families, kids living in high-risk situations. If Hesed does not support them, these families will not survive.

Igor: Yura is, how should I express this, he always considers his every word carefully. Roman has health issues. He understands everything, but he’s behind in his reasoning. Karina is our gentle child. Sonia is our little hostess—a helper. Sasha…what to say about Sasha? He realizes that he needs to seize the moment and climb into someone’s lap.

Narrator: Tatiana and Igor are on a waiting list for a better apartment. Some people wait 20 to 30 years.

Igor: This is communal housing, like a government dormitory. We cook in the kitchen, the common kitchen.  There are two gas stoves—the oven doesn’t work. The burners turn on and off on their own. It’s scary, actually. We only have cold water.  The pipes are leaking all over the place. There’s water in the hallways. The bathroom is scary, too. We fixed what we could with our own two hands to make it a little more homey for the kids, so they don’t see how the neighbors live.

Anna Kondrashenko:  You can see right away that they love each other. That’s important. They take care of each other.

The American Jewish Joint Distribution Committee (JDC) is one of over fifty programs and agencies funded in part by the Jewish Federation of Cincinnati.

Thanks to you and the help of our partner agencies, Yura, his parents Igor and Tatiana, and his four siblings, are better clothed, better fed, and received a few toys to play with this winter.

There is a new, just-released "masterful"  documentary about Moldovan Jews that has been highly praised and is now streaming on Amazon.