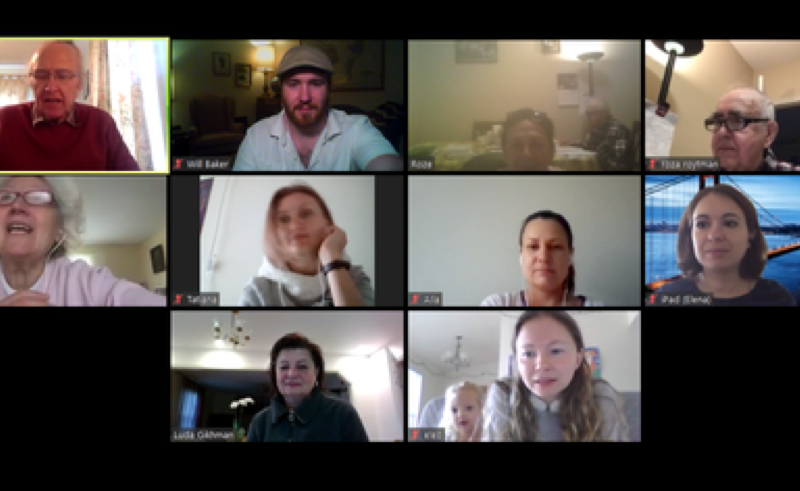 How You Help: Online English Class Offers Much to Russian Speakers

Class started at 10 a.m., but students began arriving a few minutes early. There was the usual hubbub—chatting, laughter, smiles, and waves. But this wasn’t a typical classroom. This was a class conducted over video conference.

Seven students had gathered for their weekly ESOL—English for Speakers of Other Languages—class. Jewish Family Service (JFS) has hosted the class for Russian speakers every Monday at the Mayerson JCC for years, but the stay-at-home order due to the COVID-19 outbreak changed the routine, and many had wondered what was going to become of the class.

“I was not prepared myself,” said Luda Gikhman, manager of the JFS Russian Jewish Cultural Center. “Tom really helped me set up the online class and keep it going.”

Tom Nault has been teaching the class for the last five years, and Luda said that, thanks to his leadership, the class has really become a family. In fact, Tom said while he may have been the one to set up the digital platform, the idea to move the class online came from one of his students.

Can you tip a waiter in another language?

“The students get so much out of the class,” Luda said. “It’s not just learning English. It’s social, it’s educational, and it’s intellectual. We can see new faces; we’re making friends, even now under these circumstances. It’s especially important for older adults to interact with other people. The class really embraces a lot.”

In class that day, a new student joined the six others in attendance. There were brief introductions, all in English, and then a review of the past week’s homework. The students were supposed to have practiced a reading project about tipping practices in the United States.

The passage contained many slang terms including, “ought to have,” “pointers,” and “quite a bit.” As the students took turns reading the passages aloud, Tom gently helped everyone with pronunciation and explained the slang.

After the homework review was finished, Tom began to focus on the day’s classwork, reading comprehension. The group took turns, once more reading aloud, and then answering questions about what they had just read. It was clear the students are comfortable asking for help.

Once the reading and Q&A were complete, Tom held conversations with the individual students in English, asking about their day and their family—getting to know the new student, and casual conversation with the others, whom he clearly knew well.

In addition to the seven students in attendance that day, Tom said four others, all in their eighties, do not have access to the internet, so cannot attend. Because of that, he said, he is modifying his curriculum.

“We’re switching to a more basic review of English, which is great for a couple of reasons. First, we aren’t leaving those other four students behind, but it’s also an opportunity to give the other students a chance to start from scratch.”

“A piece of his heart is here with his students”

When asked why he has chosen to volunteer for all of these years, Tom said it’s his students that keep him coming back. “I’m not a teacher by trade. I’m a retired businessman, but I’ve always been interested in language. It is such an important piece of being a citizen, and it really is great to see the students succeed and thrive.”

Tom has a wide range of students with different goals. “We have young mothers in class who are learning English right along with their children. They need to know the language so they can get a job, go to school, and get a green card. Their ultimate goal is to leave the class, and that’s great; I’m very proud whenever a person leaves. Whereas the older students, while they want to learn English, there is much more of a social aspect to it. We’ve all grown together, we know each other, we have pride together; we laugh, we cry. It’s social. It’s emotional.”

“They became part of his life,” Luda added. “A piece of his heart is here with his students.”

She went on to say this program, and others like it at Jewish Family Service, would not exist or be as successful if it weren’t for Tom and other volunteers like him, particularly Rebecca Fradkin.

“The role our volunteers are playing in the programs is amazing,” Luda said. “Their commitment is…” she pauses to think. “…I have no words to say how appreciative I am to Tom, Rebecca, and the volunteers.”

As the students began coming back from a short break, Tom asked each of them in turn why they chose to come to this class, and the theme became clear: not only to learn and practice English, but to enjoy each other’s company.

“It’s not just an English class,” concluded Luda. “It’s so much more.”

Jewish Family Service is funded by you, our donors, through the Jewish Federation of Cincinnati.

"We’ve all grown together, we know each other, we have pride together; we laugh, we cry. It’s social. It’s emotional.”
—Tom Nault, teacher of English as a second language, volunteer