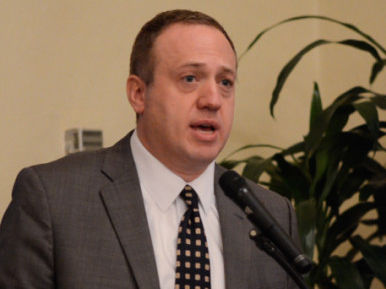 “Drawn by a drunk cartographer who was blindfolded” is how Dr. Michael Makovsky described the current borders of the Middle East. Policy wonks will recall Makovsky’s role as a Bush (W’s) advisor on Middle East policy. Makovsky currently serves as CEO of JINSA, the Jewish Institute for National Security Affairs. Speaking to an audience of local policy makers and opinion leaders at The Jewish Community Relations Council’s Gettler Breakfast Briefing, Makovsky outlined long standing U.S. objectives in the Middle East and discussed the impact of the turmoil currently engulfing the region, focusing on America’s changing regional role. According to Makovsky, over the past century, America’s focus in the Middle East have been threefold; ensuring the flow of Gulf oil, confronting and weakening Islamic extremism and supporting Israel. For most of this time, America’s regional allies have remained consistent; Israel, Jordan, Turkey and the Sunni Gulf States. Makovsky was highly critical of the President’s Mid-East Policy, labeling it ‘inconsistent’ and ‘reactive,’ describing a series of mid-east follies which have sapped the confidence of America’s allies while emboldening common enemies. Recalling the President’s landmark 2009 speech in Cairo which stressed rapprochement to Iran, Makovsky said that Obama’s major foreign policy debacle has been his handling of Iran’s nuclear program, namely being overly eager to achieve a negotiated deal. According to Makovsky, a nuclear Iran would make the current regional chaos seem like a walk in the park. Makovsky also recalled the President’s flip-flopping on the issue of the Muslim Brotherhood, initially supporting deposed Egyptian President Morsi only to quickly distance himself following the outbreak of the July 2013 coup. In spite of his heavy criticism of Obama’s mid-east policy, Makovsky noted that it has had one upside; uniting Israel with America’s Arab allies. America’s current reluctance to get involved in the region has led these countries to prepare to stand alone against their shared threats, namely extremist groups such as the Islamic State, Al Qaeda, the Muslim Brotherhood (including its offshoots) and Iran. While Syria and Iraq currently dominate headlines, Makovsky stressed the crucial role played by Jordan in stemming the tide of Islamic extremism. Recapping a conversation with a senior Israeli official, he characterized the security of the Hashemite Kingdom as a strategic necessity for the Jewish State. Makovsky shared his perception that Israel is filling the gaps left empty by America’s increasing regional disengagement, recalling Israel’s recent war against Hamas and its (unconfirmed) attacks on Syrian weapons destined for Hezbollah. Regarding a potential Israeli strike on Iran’s nuclear facilities, Makovsky believes that Israel will do America’s “dirty work” and pre-emptively attack, a move that will be enthusiastically welcomed by the Gulf States. Looking towards the future of American mid-east policy, Makovsky recommends a breakup of the post-Ottoman Empire borders facilitated by Uncle Sam. To start this process, he recommends America backing the creation of a Kurdish state. Hopefully this time around, the cartographer will be sober.