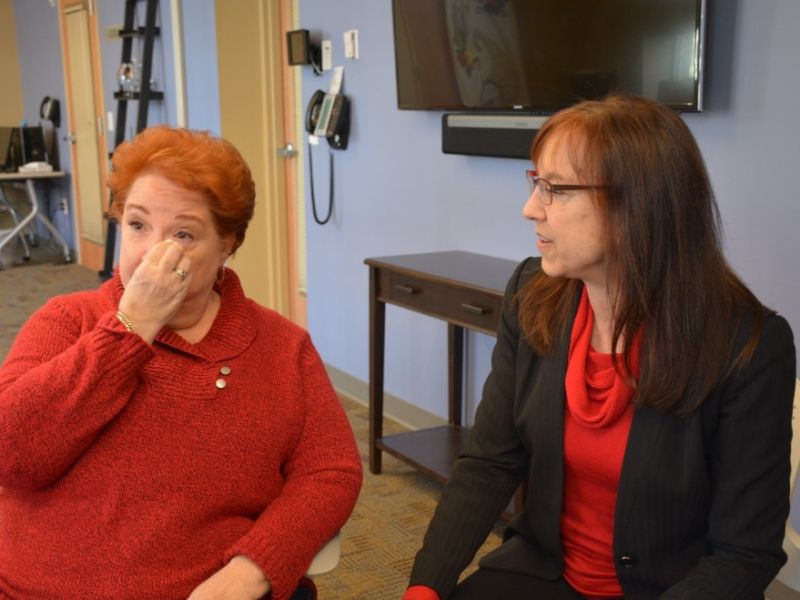 It’s “very difficult,” Leslye said. She is the only Jewish person in her low-income senior and disabled housing. “But I grew up in a Jewish ghetto—my father was a kosher butcher in Detroit!” As she talks, her eyes show both fighting spirit, and acknowledgment of how far from that life she is now.

It was Jewish Family Service, its food pantry and its social services, that initially helped Leslye when she and her family ran into backbreaking financial and emotional difficulties. But it is JFS’s new location at Hebrew Union College-Jewish Institute of Religion in Clifton—the Barbash Family Vital Support Center and Heldman Family Food Pantry—that allowed Leslye to regain her sense of purpose.

Leslye’s nature is vibrant and outgoing. A professional with successful careers in sales management and education advocacy for children with disabilities, she was also a committed volunteer, including being on the board of the Sisterhood at Rockdale Temple and cooking for the Freestore Foodbank. Leslie’s life fell apart after she, her husband, and their two teenage sons moved to Cincinnati for her husband’s job in 2001.

“The whole world crashed down,” Leslye said. While intermittently successful, her husband was unable to keep a job due to chronic mental illness. For most of their married life he struggled with bipolar disorder, and was seldom able to maintain treatment. When he failed at another job at the same time Leslye was diagnosed with multiple sclerosis, they lost their beautiful home in Symmes Township. As the MS worsened, this active professional woman could no longer work. Her husband left her, and circumstances left her with minimal financial support.

In deep trouble, she reached out to JFS. They provided counseling over the years, paid for her move to her current housing, helped pack and unpack her, and brought her food since she was unable to come to JFS’s food pantry. One volunteer in particular, Debbie Lempert, has delivered food to Leslye monthly for many years. Leslye smiles, “She and I have kind of the same philosophy, and we cook the same. So she knew what I would like.” But just as important, “Debbie makes me feel like a person. I feel normal. She doesn’t talk down to me. And she’s wonderful.”

The opening of Barbash in 2013 truly helped Leslye. “What has been so valuable about the new location is the nurturing of both body and soul that now takes place,” said Fran Gafvert, the director of the Center. “Volunteers can not only bring food monthly to Leslye, but bring Leslye to the Center. We offer peer-based socialization that runs the gamut from holiday celebrations to tai chi and drumming circles.” Gafvert concludes, “Here Leslye can be productive in a Jewishly sensitive cultural place. What I see is a spirit being lifted, and it’s just so powerful. Our work simply builds on the strength we see in her.”

It is the cooking where Leslye really comes alive. “She so much wanted to give back. She was asked to co-facilitate cooking classes here. And she is a good cook—she’s a Jewish cook!” said Gafvert. Leslye elaborates, “I can do magic in the kitchen. And I can teach other people to do magic and not be afraid. And I can talk to people and bring them out of their shell.”

When asked what the Barbash Center has meant to her, Leslye said, “I was pretty much left with absolutely nothing. Where I live I am different and it’s obvious. When I come here it’s more like coming home. Coming to the Barbash Center gives me purpose.”