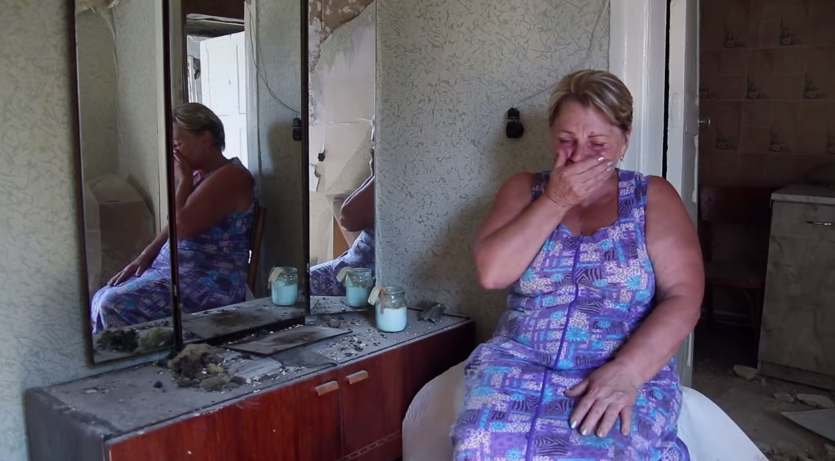 War in her Backyard—Surviving the Ukraine Crisis

“It was terrifying, all that gunfire,” Lisa Titarenko said, before turning her head away, in tears. “People have suffered a lot, and I even don’t know why.” Lisa is from Slavyansk, a city of 118,000 that is in the thick of the fighting on the eastern edge of Ukraine.

In a powerful video made by the American Jewish Joint Distribution Committee (JDC), which is funded in part by the Jewish Federation of Cincinnati, Lisa shows us her family’s home, shows us the shattered glass from bombs on her dresser, and her basement where they go when the shelling comes close.

Lisa and her neighbors had no electricity, the gas station was inoperable, lack of gasoline meant lack of transportation, and the stores were empty. In sum they had little access to food. Rocket launchers and broken remains of tanks cluttered the streets. On top of the local devastation, Ukranian currency has been devalued by 37%, alongside a 40% increase in the price of food.

Focusing on the most vulnerable Jews in Ukraine, the JDC delivered food, including by bicycle, on foot, sometime even under fire.

With help from donations through the Jewish Federation of Cincinnati, 60,000 elderly or homebound Jews, including Lisa, received critical food supplies. Another 10,000 children and their families received shelter. “No one gets left on the street,” said a JDC worker.

JDC’s work during the crisis in Ukraine builds on its commitment to support the Jewish population in the former Soviet Union. With support from the Jewish Federations of North America, since 2001 JDC’s Hesed welfare relief program has impacted the lives of more than half a million destitute Jews in the former Soviet Union who have no other place to turn. This support funds Hesed services for non-Nazi victims: elderly Jews who do not qualify for restitution-funded assistance and therefore rely solely on the generosity of world Jewry for survival.

Europe now has the largest population of displaced Jews since World War II. Thousands have had to flee since the conflict broke out; but for the old and sick, that’s nearly impossible. “In normal times, JDC’s network runs community and social services; today they have become ‘command centers’ for rescue and relief work. We bring in water, food, supplies, and medicine,” says JDC’s Oksana Galkevich.

Along with her circumstances, Lisa also shares her gratitude, saying, “From the bottom of my heart I want to thank these people [who gave her food], they have a heart of gold.”