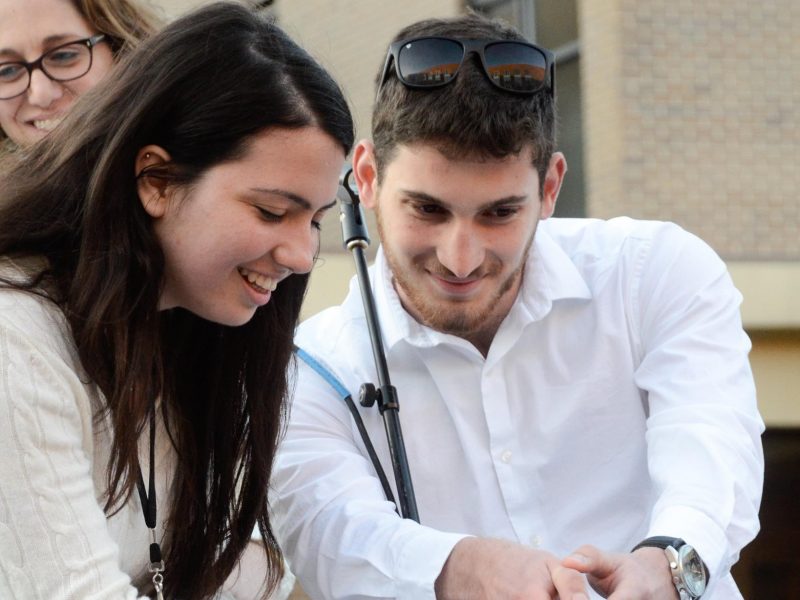 “My time as a Chaverim M’Israel made me think deeper about myself and my identity,” recalled Adi Itscovich. “All of a sudden I was a minority; Judaism was not the main culture, and it was really eye-opening to see the world from that perspective.”

Adi was involved with Chaverim M’Israel [Friends from Israel], which is a gap-year program for Israeli students, from 2018 to 2019. Instead of going right into the Israel Defense Force (IDF), students can take part in this highly sought-after program. Cincinnati typically hosts two chaverim each year.

“The chaverim are supposed to be Israel advocates for their peer group and children,” said Jan Evans, Director of Strategic Impact for the Jewish Federation of Cincinnati. “They travel to schools and camps, teaching students about Israel and Israeli culture, and they find other ways to engage with both Jewish and non-Jewish students.”

Because of COVID-19 and the restrictions on travel, the Chaverim program has been temporarily suspended. Because of that, Adi, along with fellow former chaver Natan Garfinkle, wanted to check in with the Cincinnati community.

Natan was in Cincinnati from 2014 to 2015 and has just wrapped up his time in the IDF; he is beginning a five-year architecture program at the University of Tel Aviv. He said he was always interested in architecture, but it was his time in Cincinnati that really convinced him to pursue it as a career. “I would doodle all of the time, and I really started to get more into it in Cincinnati. Then one weekend, we went to Chicago, and we took an architectural boat tour. I was fascinated by that, and by the time I came back to Israel, I knew that’s what I wanted to do.”

Adi is currently in the IDF and is in officer training, studying at what she called the equivalent of West Point Academy. She said most people will serve two to three years, but she plans on staying in for a long time. “I’ve never felt comfortable with just doing the minimum. If I do something, I do it 200 percent. I felt that way about my year in Cincinnati. I wasn’t there just to spend my time and have fun. I wanted to know what I did had meaning and made others feel good.”

Both Adi and Natan said their time in Cincinnati was special, partially because of their host families. “The most memorable thing for me is probably the families I stayed with,” Natan said. “Whether it’s the Bachrachs, the Docks, or the Spiegels. It felt just like another home—that we really were family. I love them very much, and we’re still in touch.”

Adi said she was very nervous for her first Passover Seder in Cincinnati. “It was the first one I didn’t spend with my family. We never miss Passover. My grandma makes sure of that. It was a really difficult time for me; I was really homesick, missing my family and my dogs. But that night was so special and unique; I really felt like part of the Evans family. Then, while we were cleaning up, Ross said, ‘Welcome to the family,’ and it was true. It felt natural, like it was my real family.”

Both agreed that one of the best parts of their chaverim experience was working with students, especially non-Jewish students. “It was when we were talking to those students, that it felt like we were making the biggest difference,” said Natan. “Sometimes we were the first Jews they had met, and that was really mind blowing for an Israeli. But it felt like we were making a difference by sharing what Israel is and giving them a more realistic picture of what it is like.”

Being a part of the chaverim program continues to influence both of their lives. Adi has been giving lectures to groups of a thousand or more soldiers. “I spoke to my base commander about how we can add more moral value to our training, beyond basic army training. I really believe that officers should be good human beings first, then good soldiers second. My commanders agreed, and I’ve been able to give a couple of talks. It was a little overwhelming, because when you have a thousand people, you’re going to have to start answering a lot of questions.” She said a lot of what she has been speaking about are things she learned in Cincinnati—different worldviews, different ways to be Jewish, and what it’s like to be a minority, but ultimately, about how to build common ground and work together.

Natan said his time as a chaver also played heavily into his time in the IDF. “While I was serving in the army, anytime there was a group coming from Cincinnati or the US, I would volunteer to show them around, or host them at my house. One of the most memorable ones was a group of teachers from Cincinnati who we gave a long bike tour through Netanya. I feel like being an emissary is always something that will be with me, because of my time in Cincinnati.”

All of the former chaverim are in touch with each other and are working hard to keep Cincinnati’s connection to Israel strong during COVID-19. “We’re a big group,” said Natan. “Even though we’re all in different life stages—some in the army, some in school, some with kids—we’re all still in touch and trying to come up with ways to stay connected to Cincinnati.”

For Adi, it is important that the communication continues. “I think the most important thing is to call somebody. I call all of my Cincinnati friends once a week. It’s important to keep this human touch, the sense of community, because when you minimize the amount of time you spend outside of your house due to COVID, it’s hard to keep this community.”

“Even though we were only in Cincinnati for a year,” Natan said, “we’re chaverim for life now. Our connection with Cincinnati has been so important for us.”