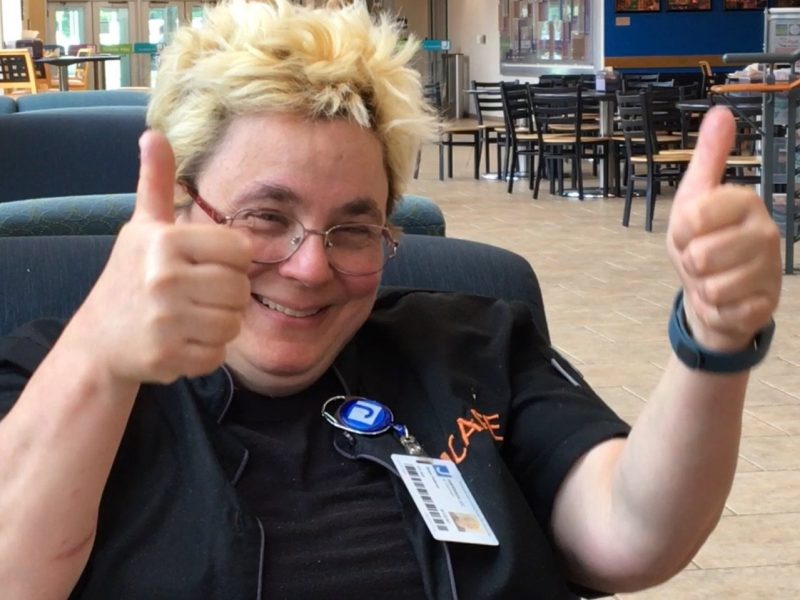 How You Help: “You Gotta Keep Smiling:” Helping Batya Find a Job She Loves

With that pronouncement, Batya Selavan grins. A quick talker who exudes energy and confidence, she’s standing by the oversize gold bell at JVS Career Services in Blue Ash. It’s clear that being asked to offer advice to those still looking for work has hit a chord.

It was a long and difficult road for a motivated worker. After ten years scanning medical records, Batya attended vocational school at Scarlet Oaks to become a medical billing and coding specialist, which she had hoped would be a step up. However Batya searched for more than seven months, applying for 60 different jobs. With no luck.

“I try to approach things in a positive way, but I felt very frustrated. Why hadn’t people called? I went on a couple of interviews and didn’t get hired, but I didn’t give up because I had to make ends meet,” she said.

“Over the course of a year, we helped Batya through coaching, practical support, punching up her resume, connections to possible employers, and more,” said Slaton. Because of her previous food service experience, they also decided to open up Batya’s options to include food service jobs.

“Kim seems to really network with a lot of employers, so when I go to the interview, it’s like they already know me already, and the next thing I know I’m getting hired for a job,” said Batya. “She reached out to people and sold me in a sense.”

Things looked good right away. “I came for an interview, and here I see Drew [Brown, Director of Food Services and Strategic Initiatives at the Mayerson JCC,] and I had worked with him 20 years ago, and I thought that was pretty cool. We had a nice conversation and they gave me a tour of the [JCC] kitchens. Then I had a working interview, and they were impressed with how fast I was washing dishes, so the next thing I know, I’m hired. And they said: no probation period for me, that was it, they found their team,” said Batya, smiling.

Asked about Batya’s experience, Slaton said, “She stuck with it, she was game for anything. I loved seeing her pride after she got her job at the JCC.”

“The people at JVS have just been wonderful with their motivation and their support,” said Batya.

Batya immediately thrived personally and professionally. “[Soon] they had a Jewish community day at the ball park and we got t-shirts that said “Cincinnati” in Hebrew. While I was there I got a message from Kim and she said that Temple Sholom was looking for someone two nights a week to be kitchen supervisor. I said okay, and I went for the interview and I got hired on the spot. That was very cool.”

Anyone can see that Batya works extremely hard. She has continued a 10-year part-time position at Sears, and will keep the new part-time job at Temple Sholom too.

But her full-time kitchen job at the JCC is her new family. Batya works in the kitchen prepping and washing dishes. As she wrote in an email early on, “I had a blast today. This job is a keeper!”

Asked how Batya has been getting settled in, her supervisor Drew Brown praises her work. “Batya has been one of the best hires I have made in my career as a chef. She has quickly become indispensable.”

But perhaps Batya herself best says what a job can do to better someone’s life: “I’ve found I have a new extended family here now. When they had the Israel celebration, I helped hand out tea, and we were involved in Adath Israel’s Kosher BBQ. Our crew—there’s no us and them. We’re all together. That’s a good thing.”

As is the tradition at JVS Career Services, Batya came back to visit and to ring the gold bell that everyone who succeeds in getting a job rings to celebrate. She said, “When I rang the bell there was that good feeling of adrenaline—and I just went wham!” And true to form, she kept on smiling.