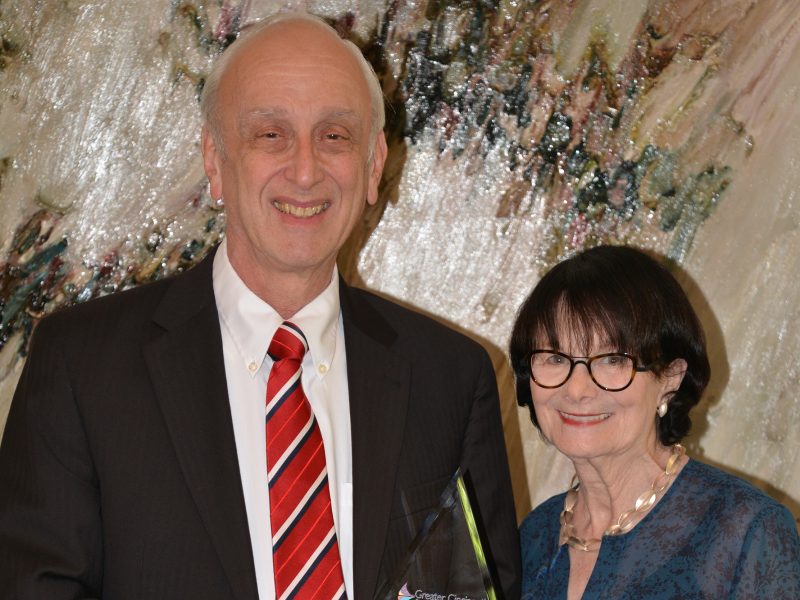 An astonishing achievement: Stuart Susskind has solicited for more than 60 years for the Jewish Federation’s annual and planned giving campaigns. He and his wife Terry were honored on June 23 at the 23rd annual Voices of Giving event.
August 20, 2021 | 0 Comments
Tweet
Share
Share
0 Shares

The Jewish Federation of Cincinnati honored two of its community members at the 23rd annual Voices of Giving event, which is hosted by the Greater Cincinnati Planned Giving Council. The program recognizes and celebrates philanthropists who have made a bequest or planned gift that will help ensure the long-term welfare of nonprofits in our community.

The Federation nominated Terry and Stuart Susskind for their generous and loyal leadership and support. The couple has spent decades working to support the Cincinnati Jewish community. Terry has served on many boards and worked assisting with program development for the Mayerson JCC, American Jewish Committee, Wise Temple, the Jewish Community Relations Council—the public affairs arm of the Jewish Federation—and Jewish Family Service. In addition, for 25 years she represented the Jewish community on the weekly interfaith radio show Genesis. Terry received the Clara Greller award for young adult leadership, has served on the Jewish Federation planning and allocations committee, and is recognized as a Lion of Judah through her annual giving.

Stuart is an attorney and has more than 50 years of experience in planning and administration of estates with expertise in income tax planning and compliance, and his commitment to planned giving goes back over three decades.  Stuart has been an ambassador for the Jewish Federation and has solicited for more than 60 years for the annual and planned giving campaigns, and chaired one of the first endowment campaign initiatives at the Jewish Federation of Cincinnati, long before this brand of sustainable fundraising was well understood by most organizations. He had the vision to lend his expertise and skills to identify a committee of individuals who would begin legacy conversations in our community. He and Terry have both participated in numerous Annual Campaign efforts.

“Throughout Stuart’s career as a tax and estate planning attorney he practiced what he preached,” said Federation’s Director of Planned Giving and Endowments and Create Your Jewish Legacy, Debra Steinbuch. “He never misses an opportunity to encourage his clients to consider the benefits of creating a legacy gift that would insure their favorite charities would be supported with a lifetime gift.”

The Susskinds made a legacy provision for the Jewish Federation of Cincinnati, which will perpetuate their more than 25-year history of annual giving. They have also made similar commitments to other Jewish and non-Jewish community nonprofits.

“Heritage is important,” said Stuart. “My family taught me to never forget where you come from, and always do the best that you can to sustain your community. I don’t want to be the link that breaks the chain.”

The Susskinds feel strongly that the Jewish Federation is an important organization to support, which is why they have set up a legacy gift. “Their legacy gift will assure the continuation of their annual giving and enable the Jewish community and other organizations dear to them to benefit from their generosity into the foreseeable future,” said Steinbuch. “It will also allow the Jewish Federation to continue to provide programs for the community and funding for partner agencies, as well as continue to provide a strong, vibrant, and caring community for future generations. Stuart and Terry’s personal and professional devotion to our organization and other organizations is inspiring and fills us with pride.”

Terry states, “Our legacy will ultimately be our children’s and grandchildren’s legacy gifts too.  I think they are going to be very proud of us for engaging them in our giving process, knowing that these gifts are to make our community better than it would have been had we not contributed.”

In addition to the Susskinds, two other Jewish community members were honored at this year’s Voices of Giving event. Linda Greenberg was honored for Playhouse in the Park, and David Hoguet for Jewish Cemeteries of Greater Cincinnati (JCGC). Both are committed not only to the vibrancy of a strong Jewish community, but a strong Cincinnati.

The Create Your Jewish Legacy (CYJL) initiative began in Cincinnati in 2014 and helps train and support 23 local Jewish agencies, congregations, and day schools in the area of legacy giving. The ultimate goal is to build endowments to help sustain these organizations and ensure a vibrant future in our Jewish community. Funding for CYJL came in part from the Harold Grinspoon Foundation (HGF) Life and Legacy™ program, along with funding from The Jewish Foundation of Cincinnati and the Jewish Federation.

The HGF initiative is a highly selective grant and, since its creation, it has motivated 17,000 donors in 69 communities—including Chicago, Miami, Atlanta, and Washington, DC—to commit more than a billion dollars in current and after-lifetime assets to the Jewish organizations that shaped their lives.

Cincinnati was the first community to reach a thousand legacy commitments and, in total has more than 1,800 legacy commitments, many supporting multiple organizations. The CYJL program helps support the Federation’s mission of bringing together diverse groups to build and sustain a Jewish community, while developing and connecting leaders, contributors, organizations, and ideas to help people in need, support Israel, and assure a vibrant Jewish future.

“Our legacy will ultimately be our children’s and grandchildren’s legacy gifts too.  I think they are going to be very proud of us for engaging them in our giving process, knowing that these gifts are to make our community better than it would have been had we not contributed.” —Terry Susskind