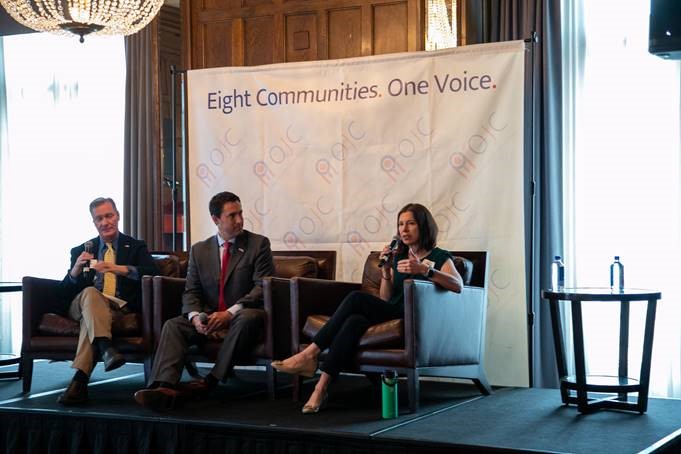 Through Federation’s Annual Campaign, Ohio Jewish Communities Leverages the Power of Many

“Bipartisan isn’t a four-letter word. Neither is compromise. And neither is lobbyist,” said Howie Beigelman, Executive Director of Ohio Jewish Communities (OJC). “Our mission here at OJC is to leverage support for Ohio’s Jewish agencies and communities.”

OJC was founded in 1982 as a statewide government advocacy, public affairs, and community relations voice for Ohio’s eight Jewish Federations and their network of 150 nonprofit agencies statewide. OJC’s purpose is to enhance the Jewish community’s ability to serve vital human needs, and Cincinnati’s annual campaign helps support that work.

OJC provides funding in two ways—OJC-led funding and OJC-supported funding. As explained by Beigelman, “OJC-led funding means we are pushing that issue. Examples would be increased funding for community security or the establishment of a State Holocaust Commission, and certain capital projects. These are the initiatives that probably wouldn’t have happened without us. OJC-supported funding is when we lend our support to projects, either in a coalition or with a national partner, like JFNA [Jewish Federations of North America]. We make the distinction to be fair, honest, and transparent.”

Also in 2020-2021, OJC-supported funding provided more than $50 million in grants statewide, including $12.4 million, which helped support 47 COVID relief-related grants to 29 Jewish agencies in Cincinnati. OJC has also worked to secure $8.5 million in the state biennial budget for security funding for nonprofits at risk of a terror attack.

“Ohio Jewish Communities is our Jewish community’s voice in Columbus, and the value it has for Cincinnati is obvious,” said Jackie Congedo, Director of the Jewish Community Relations Council of Cincinnati (JCRC). “Howie and the OJC team are the envy of Jewish communities all across the country. They are pragmatic, savvy, strategic, deeply connected, and respected in left and right political circles. Simply put—on so many fronts—they get the job done, and it’s a job that’s getting harder and harder, with higher and higher stakes.”

“Where OJC really showcases its value,” said Beigelman, “is as a statewide organization of very large, medium, and small federations and communities. We can leverage support from our larger communities to impact smaller ones, while some of our most important legislative champions represent our smallest Jewish communities, making them the key contacts on priorities our largest federations couldn’t succeed at alone. We are eight different communities speaking with one voice.”

Beigelman continued, “We are unique. In a polarized, politicized world, we look for common ground. While some today demand loyalty to party or person above all, we are focused solely on working across party lines, on the issues that matter, to deliver quantifiable results for our communities.”