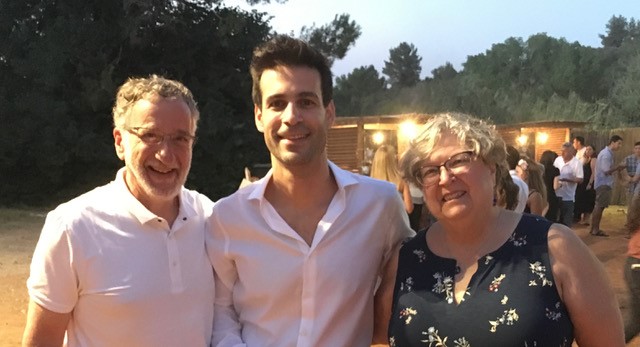 “It feels good to give and you feel like you’re helping in a place of need,” said Trish Joseph. Trish and her husband, Scott, have been giving to the Jewish Federation of Cincinnati since they moved to this community 23 years ago. In fact, the day of the interview for this article was the 23rd anniversary of the day they packed up their family car in Massachusetts and headed to Ohio.

The Josephs are both doctors and moved here for a work opportunity for Trish.  She was recruited by The University of Cincinnati to become the Director of the Adult Cystic Fibrosis Center.  Scott took a position at the Cincinnati VA with less demanding hours, allowing him to take an active role within the Jewish community. “I used to say Scott’s hobby was being Jewish,” joked Trish. “He was involved in so many things. He really represented our family, because I was working twelve to fourteen hours a day and didn’t have time to be as active as he was.”

“It started pretty simply,” said Scott. “A friend of mine on a random Friday night said, ‘hey, you look like a nice guy, why don’t you come to a Brotherhood meeting,’ and the next thing I knew, I’m the President of Brotherhood at Wise Temple. Then it just grew and grew.  My true passion was the P2G [Partnership2Gether] Committee at the Federation. I served on this committee for 13 years, with six-and-a-half of them as co-chair.

The couple considers Israel a second home and have been there more than a dozen times, thanks to their involvement with the Federation. “We have friends in Israel that have become family,” said Scott. “That never would have happened without P2G.” The Partnership2Gether program develops Jewish peoplehood, enriches Jewish identity, enhances Jewish pluralism, and strengthens the communities of Cincinnati and Netanya, Israel, by creating ongoing, reciprocal, and meaningful people-to-people connections and engagement.

Through that program, the Josephs have hosted two of Cincinnati’s Chaverim m’Israel, or Friends from Israel; young emissaries from Israel. “They are brothers and were here ten years apart. Their family has merged with our family, and they will be the first ones we visit once COVID allows,” said Scott. “I’d say a majority of our social life is with Jewish friends engaging in Jewish activities. We’ve received much from the community, and by donating and creating a legacy gift we are giving back.”

Despite not being from Cincinnati, the couple considers it home. “We’ve lived here for 23 years,” said Scott. “Our child has moved away. We are both retired and have no reason to leave. This is our home.”

Trish said it is easy being Jewish in Cincinnati because it is a small, tight knit community where you feel like giving is actually making a significant impact. Scott added, “My family is in the New York area with a much larger Jewish population.  Given the large size, it is more difficult to make a major impact.  In Cincinnati, we come together for both joyous and sorrowful occasions. There is a lot of support in the Cincinnati Jewish community.”

When it comes to getting the next generation interested and involved in the community, Trish said it’s vital for people to explore different areas of the community to see what they connect with. “There is something here for everyone, but you have to know where your passions lie.” Scott added, “As soon as you find your niche, it’s easy to become active and depending on your level of involvement, it is especially gratifying.

“I’d say a majority of our social life is with Jewish friends engaging in Jewish activities. We’ve received much from the community and by donating and creating a legacy gift we are giving back.” –Scott Joseph, legacy donor