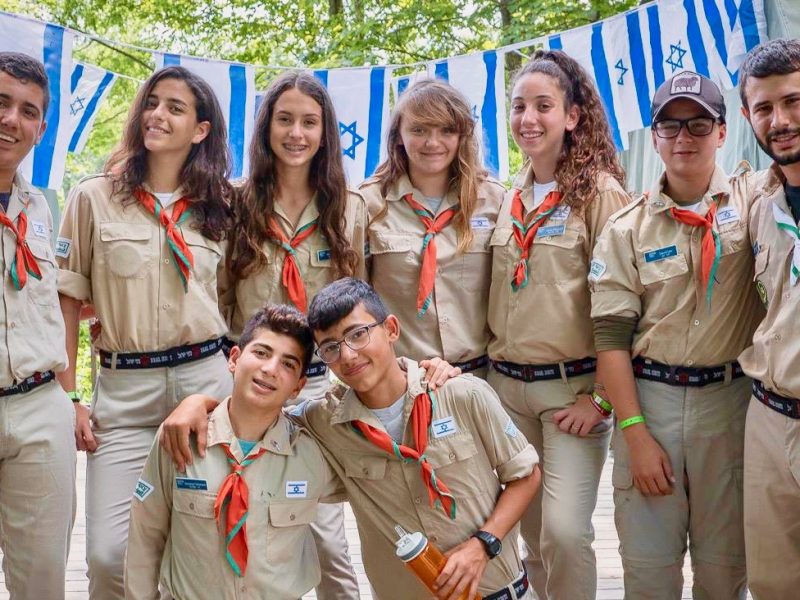 Eight of the scouts at Camp Friedlander traveled a long way this summer to go to camp. A group of eighth graders from the Tzofim Delegation of Netanya, Israel spent two weeks at the Boy Scouts camp in Loveland, learning about life in Cincinnati, sharing campfires with Boy Scout troops, and teaching the American scouts a thing or two about Israel.

The scouts are from the Bazak Tribe, similar to an American troop. Before heading to camp, they stayed with host families in Cincinnati as part of the Partnership2GETHER (P2G) project of the Jewish Federation of Cincinnati. From Eden Park, to the carousel at Smale Park, to Graeter’s, they got the full Cincinnati experience. The scouts visited the National Underground Railroad Freedom Center, where they learned about what it means to be free. They visited Jewish institutions around town in order to learn about living as a Jew in the United States. Some of those sites were: Hebrew Union College and several area synagogues – Plum Street Temple; Adath Israel; and Beth Adam, the congregation providing their host families. They also completed a service project, stocking pantry shelves at the Barbash Family Vital Support Center.

Once at Camp Friedlander, the scouts joined the ranks of the Boy Scouts, completing COPE, a team-building and leadership-building program; completing ACE, a challenging program of adventure activities; earning rifle and climbing merit badges; swimming; and building campfires. Their first Friday evening, the Bazak Tribe performed the flag-lowering ceremony, and they hosted a Shabbat dinner for more than fifty people, including their host families, P2G committee members, and Boy Scouts at camp. They learned how to cook apple pies in a Dutch oven. Also, the Tzofim leader, Chen, not only entered but won the Golden Spoon scoutmaster cooking competition for his dinner of shikshuka, tahini, and cucumber and tomato salad.

The Bazak Tribe had the only female campers at Camp Friedlander. Unlike the United States, Israeli girls and boys participate together in Scouting, so this delegation was made up of four girls and four boys.

This summer Camp Friedlander flew three flags—American, Israeli, and Egyptian. In addition to the Israeli scouts, the camp hosted a counselor from Egypt, making it an international experience for all the teens at camp, and an opportunity to work together.

“This is the first time that many of the American scouts had ever met an Israeli, and it gave them a glimpse into a world they only read about or see on TV,” said Alan Brown, committee member of the Jewish Federation’s P2G program and chair of the Jewish Committee on Scouting, Dan Beard Council, BSA. “For most of the Israelis, this was the first time they got to meet Americans their age. It was so heartwarming to see how the partnership influences the worldview of teenagers from both groups.”

Before heading home, the Israeli scouts helped a local scout, Samuel Vogel of Adath Israel, on his Eagle Scout service project. They also got to ride the roller coasters and swim in the water park at Kings Island.

Netanya is Cincinnati’s partner city in Israel. The scouting exchange program was started 15 years ago by Cincinnati’s P2G committee, and is made possible by the Jewish Federation of Cincinnati. P2G makes people-to-people connections and builds relationships between individuals in the two cities. In this case, those relationships are between eighth grade scouts.

“It was amazing to watch the Netanya teens begin to understand the differences and similarities between being Jewish in Israel and in the United States,” said Federation Director of Youth Israel Experiences Sharon Spiegel. “They realized that we are actually like one family that happens to live in two different homes, and by understanding each other, we are stronger.”

Partnership2Gether with its support of Israeli scouts visiting Cincinnati and many other Cincinnati-Netanya collaborations, is just one of over fifty programs and agencies funded in part by the Jewish Federation of Cincinnati.

Thanks to you and the help of Partnership2Gether, the Bazak Tribe of Israeli Scouts and the Boy Scouts of Camp Friedlander each got a wonderful education about each other’s lives.

“For most of the Israelis, this was the first time they got to meet Americans their age. It was so heartwarming to see how the partnership influences the worldview of teenagers from both groups.” – Alan Brown