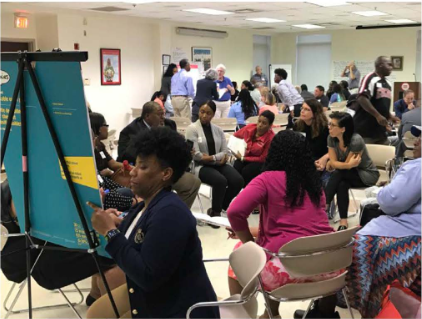 Beyond the Trial: Improving Police-Community Relations in Cincinnati

In recent weeks, for the second time, former University of Cincinnati Police Officer Ray Tensing stood trial for murder in the shooting death of Sam DuBose, a Black unarmed motorist. And for the second time, a jury tasked with making a determination of guilt or innocence could not reach a unanimous verdict. While opinions vary about the extent to which justice was or was not served, many can agree that we all want a future where tragedies like the death of Sam DuBose don’t happen in the first place.

The work of the JCRC is that of bridge building, and as such, we stand ready to work with other communities of faith to improve police-community relations so that these types of tragedies can be avoided, thereby enhancing the safety and security of our law enforcement officers and the communities that they serve.

As we think through what next steps we should take together, I wanted to share these thoughtful insights from my colleague Dorothy Smoot, Executive Director of the Urban League of Greater Southwestern Ohio’s Community Police Partnering Center. The Partnering Center is hosting a series of forums for members of our community to come together and affect positive change moving forward. At this point, participants from around the city are moving from conversation to action, focusing their energies in three work groups: Voter Registration & Jury Pool, Racism & Integration, and Education on Police and Community Relations.

I invite you to join these groups as they further analyze these challenges and devise action steps during the following work sessions, both of which will be held at the Urban League, 3458 Reading Road, Cincinnati, Ohio 45229.

To register or for more information, email Tbanks@ulgso.org.

The second trial of former UC Police Officer Ray Tensing has come to an end. Tensing’s second trial has drawn just as much debate, if not more than, the first trial. There have been lots of questions and concerns from the community about whether an impartial verdict could be reached in the trial or would it come to the same end as the first case after a mistrial was declared by the judge when the jury failed to reach a verdict. The death of Sam DuBose, an African-American motorist, has impacted each member of the community differently.

However, the heart of the matter is the trust or lack of trust that many in the community have for our local law enforcement, criminal justice and judicial system.

There have been protests, marches, vigils, Facebook Live exchanges of opinion, and “community conversations.” All of which are viable forums for sharing opinions, though none get to the crux of the matter… What will we do to ensure our community doesn’t find itself in this position again? How do we get beyond the trial?

Cincinnati cannot live up to its full potential of being the place where we all want to live, work and play  without all stakeholders committing to building trust and community efficacy by working together to ensure equity in our law enforcement, criminal justice and judicial system. This requires moving from “conversation” to action, whether it is making small discretionary practice changes or systemic changes. The challenges may seem insurmountable if we look at them all together; however, breaking down such insurmountable challenges into achievable responses to specific concerns makes success possible.

Since 2002, with the historic commitment of the City of Cincinnati, The Black United Front, and the Fraternal Order of Police to the principles of the Collaborative Agreement, The Partnering Center has served as the impartial facilitator for problem solving in Cincinnati. Problem solving was identified in the Collaborative Agreement as the road map for equity and transparency in policing with the critical component of citizen engagement.

Using a nationally recognized, evidence based model for problem solving, we bring together stakeholders in a safe space where their voice can be heard and their ideas shared. SARA the acronym for Scan, Analysis, Response and Assessment, is the problem solving model that has been used by the Partnering Center and numerous communities throughout the nation to facilitate this inclusive process. The goal is for all voices to be heard and opinions and suggestions valued while trust based relationships are fostered.

The Partnering Center is hosting a “Beyond the Trial” problem solving community meeting on July 6, 2017 from 6:30 p.m. until 8:00 p.m. at the Urban League office at 3458 Reading Road. Interested stakeholders are invited to become part of a series of meetings utilizing the SARA process to identify responsive action to community driven concerns related to law enforcement, criminal justice and the judicial system. The goal is to engage stakeholders in building trust, transparency and equity in our City’s the law enforcement, criminal justice and the judicial systems. We are extending this invitation to elected and appointed state and local government officials, political action groups, members of the community, police officers, and clergy. For those that are unable to attend, thoughts and suggestions can be shared at Partofthesolution@gcul.org. Please RSVP to Tye Cobb at tcobb@gcul.org or (513) 487-6520.

*PLEASE NOTE: While the initial July 6 meeting has passed, ongoing workshops are being held. Scroll to the beginning of this post for details.

"There have been protests, marches, vigils, Facebook Live exchanges of opinion, and 'community conversations.' All of which are viable forums for sharing opinions, though none get to the crux of the matter… What will we do to ensure our community doesn’t find itself in this position again? How do we get beyond the trial?" —Dorothy Smoot, Executive Director of the Urban League of Greater Southwestern Ohio’s Community Police Partnering Center