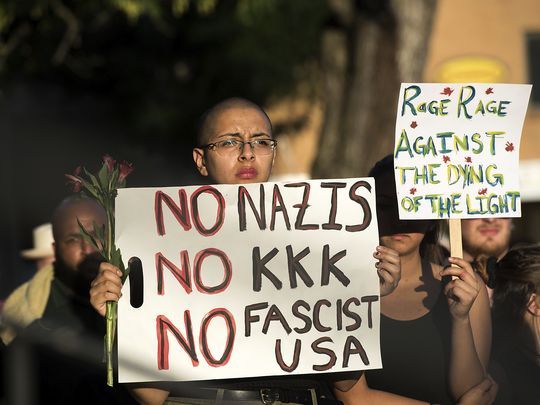 Brenda Diaz-Castro, holds a sign during a candlelight vigil on Sunday, Aug. 13, 2017, in Harrisonburg, Va. The vigil was held for the victims of the violence in Charlottesville, Va., on Saturday. (Photo: Stephen Swofford, AP)
March 19, 2018 | 0 Comments
Tweet
Share
Share
0 Shares

Choosing to Overcome Apathy, We Won’t Succumb to Hate

In response to a recent Enquirer article about a local lawyer who is defending organizers of a white supremacist rally in Charlottesville, Virginia, Tony Stieritz, the Director of Catholic Social Action for the Archdiocese of Cincinnati, and I wrote this op-ed. It appeared in The Cincinnati Enquirer on Sunday, March 18.  —Jackie

Recently, the Enquirer profiled an attorney from our area who is defending organizers of a white supremacist rally in Charlottesville, Virginia.  One person died and more than a dozen others were injured in Charlottesville when a car drove into a crowd of marchers who were protesting against the white supremacists.  While everyone is entitled to a competent legal defense, the article makes clear that this local attorney has beliefs in common with his white supremacist clients: “He believes white people must save and preserve their civilization from Jews, immigrants and minorities.”

“My willingness to get involved is to oppose Jewish influence in society,” the attorney said. This type of rhetoric was used by Nazis in the 1930s and 1940s to justify anti-Jewish violence and repression, and ultimately genocide. The attorney also called into question whether the Holocaust, during which six million Jews were murdered by Nazis, actually happened.

Just as distressing as this hate-inspired ideology is the false cover under which he preached it–claiming that these hateful beliefs are somehow affirmed by his self-assigned “Catholic” identity.  In reality, antisemitism and racism have been unequivocally condemned by the Catholic Church, and his beliefs defy Catholic moral teachings on the infinite dignity of every human person.  Pope Francis recently stated, “A Christian can never be an antisemite, especially because of the Jewish roots of Christianity.”

It might be easy to dismiss such examples of unleashed bigotry as sideshows. But there is a less obvious and more pervasive threat here, and that is apathy; our lack of relationships with those of another race, creed, socioeconomic status, or sexual orientation and a lack of courage to be more than a bystander when others are harassed or bullied.  An absence of intercultural and interfaith relationships can leave us vulnerable to tribal mindsets, that is, the temptation to validate ourselves only in opposition to others.

Therefore, our response to hateful displays must be twofold. First and foremost, people of goodwill must be clear and unabashed in speaking out against hatred. Second, we must make a concerted effort to construct the kind of society where seeds of hate will not take root. In order to accomplish these goals, we must work across differences to build a community that exemplifies our shared values. And then, we must be intentional about giving those efforts the kind of public attention that our society unwittingly too often gives to hateful and destructive forces.

Cincinnati’s Catholic and Jewish communities, among many others, are committed to this essential work. The mission of the Jewish Community Relations Council (JCRC) of the Jewish Federation of Cincinnati, founded in the 1930s in response to growing antisemitism, is to promote Jewish security recognizing that Jewish security depends on a just society for all. The Catholic Social Action Office and Commission empower Catholics in the Archdiocese of Cincinnati, to celebrate and live out the Gospel call for life, human dignity, and care for God’s creation through formation, organized social ministries, ecumenical and interfaith relations, and opportunities for public advocacy and action.

We are in ongoing conversation with each other and with our counterparts in other ethnic and faith communities, and we routinely celebrate the work undertaken by our respective congregations to jointly advance the region’s common good.

For example, in the wake of Charlottesville, more than a dozen minority communities came together to form the Cincinnati Regional Coalition Against Hate. Set to make its official debut during the YWCA’s Stand Against Racism event on April 27, the Coalition represents a united front in promoting a hate-free Cincinnati region.

For fifty years, the Metropolitan Area Religious Coalition of Cincinnati (MARCC) has brought leaders of major religions together to work on common social concerns.  And, in June, the Bridges of Faith Trialogue will bring practitioners of twelve religions together to celebrate our city’s religious diversity in the first ever “Cincinnati Festival of Faiths.”

Several weeks ago, the Holocaust & Humanity Center in partnership with the Archdiocese brought Jeannie Opdyke Smith to Seton High School to share the story of her mother, Irene Gut Opdyke, a Polish Catholic woman who risked her life to save Jews during the Holocaust. Her story showed us that faith, hope and love can triumph over evil.

When we feel threatened, our instinct is to retreat into our own communities. And, when others are threatened, discomfort or apathy can tempt us to simply say nothing about it. Movements that preach hate count on this—so as to divide and conquer.  But they underestimate the great majority of compassionate Cincinnatians who are working across faith and ethnic lines to build a community where all people can thrive. Our resolve to create unity is stronger — and our stories of collaboration, inclusion, and tolerance have the power to sound louder– than any hateful ideology.

"We must work across differences to build a community that exemplifies our shared values. And then, we must be intentional about giving those efforts the kind of public attention that our society unwittingly too often gives to hateful and destructive forces." —Jackie Congedo and Tony Stieritz