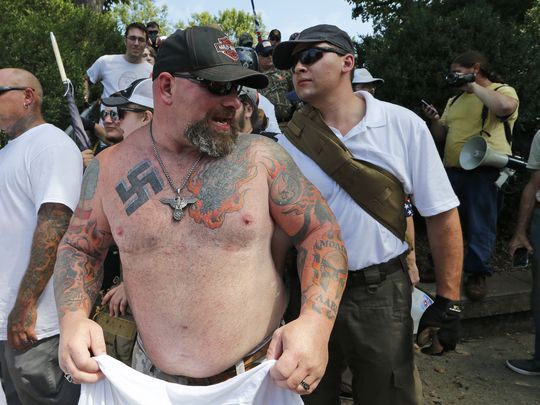 Hatred Is a Choice; Keeping Silent in the Face of It Is Also

In response to the violent demonstrations in Charlottesville, Virginia, JCRC Director Jackie Congedo and Executive Director of the Holocaust & Humanity Center Sarah Weiss wrote the follow Op-Ed, which was published in The Cincinnati Enquirer on August 17. Here is the link to the article on Cincinnati.com.

On Saturday afternoon Holocaust survivor, Dr. Al Miller told his story at the Cincinnati Museum Center’s 1940s Day, a day honoring the era of the “greatest generation.” At the very same time, there were white supremacists marching in the streets of Charlottesville, Virginia; waving Nazi flags, shouting out racial slurs – the day ending in violence, as a car driven by a young man filled with hateful ideology plowed through the crowd, leaving one dead and 19 injured.

The Holocaust & Humanity Center (HHC) and the Jewish Community Relations Council (JCRC) of the Jewish Federation of Cincinnati mourn the loss of life in Charlottesville and strongly condemn the violence and use of neo-Nazi, racist, and anti-Semitic symbols and language. Nazism in any form has no place in American society.

Both HHC and JCRC were established in response to anti-Semitism and hate. The JCRC was founded in the 1930s, in the wake of a wave of American Nazi activity and anti-Semitism. HHC was founded by those who were fortunate enough to survive the Holocaust and rebuild their lives in our community. The founders of both organizations believed that eradicating anti-Semitism could only be achieved by working to eradicate hate in all of its forms. We are saddened that our work is still all too relevant today.

Dr. Miller and his family were witnesses to the rise of Nazism in Germany, and they were fortunate to escape in the late 30s and eventually settle in the United States. Dr. Miller also served in the U.S. Armed Forces during WWII, fighting against the very hatred he and his family had to flee from.

It has only been 70 years since the end of WWII. This is a short time in terms of history, and it is too soon for us to be forgetting all that was sacrificed and lost in the fight against Fascism and Nazism. There is no place for this kind of hatred in our country – not then, and not now, when we should have learned the lessons of this dark history: not to repeat it, but to prevent it.

We are disturbed to learn that the alleged perpetrator grew up in the Cincinnati region, had a fascination with Nazism and that his hateful outlook was known. Dr. Miller has said, “Words are often more powerful than guns. Words are used so easily to mock, to humiliate, to incite, to attack, to demonize. That is precisely how the Holocaust began. We all know how it ended.” Sadly, Saturday’s attack was a reminder that words can lead to deadly outcomes and violence, and so we have an obligation to speak up.

We shall stand up against prejudice and racism. We will continue to educate so that future generations can understand that hatred is not inherent – it is a choice, and remaining silent in the face of hatred is also a choice with dire consequences.

"We shall stand up against prejudice and racism. We will continue to educate so that future generations can understand that hatred is not inherent – it is a choice, and remaining silent in the face of hatred is also a choice with dire consequences." —Jackie Congedo and Sarah Weiss