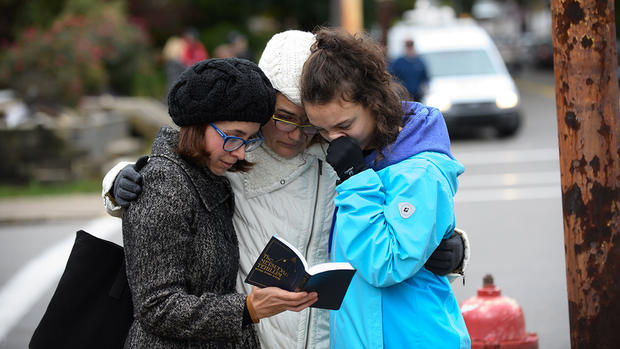 Women read a prayer book outside the Tree of Life Synagogue in Pittsburgh. Rabbi Margie Meyer offers a D'var Torah encouraging our community stand up for what is just and right in times of grief.
November 6, 2018 | 0 Comments
Tweet
Share39
Share
39 Shares

In Our Grief, We Must Stand Together for What is Just and Right

In response to the attack at the Tree of Life Synagogue in Pittsburgh, JCRC Board Member Rabbi Margie Meyer offered the following D’var Torah to begin our next board meeting. It expresses so well the mission of the JCRC and why it’s important to stand up together with our interfaith partners for what is just and right.  –Jackie

The Torah portion the week after the attack in Pittsburgh was called “Hayei Sarah,” (the Life of Sarah), yet it paradoxically opens with Sarah’s death. Just as it is Sarah’s life as the first matriarch that is important to us as Jews, it is the lives, not the deaths of the victims we must remember.

We recall these good Jews, not just because they were brutally murdered, but because they were unique, for they were the ones who kept us going. They weren’t the wealthiest or the most powerful in their Jewish community, but they were the ones—and we all know their counterparts in our own synagogues—who kept our Judaism alive week after week. They were the few who were always on time, handing out the prayer books, greeting others at the door, rolling the Torah, preparing to lead Torah discussions, and leading our services. Their lives were part of the fabric of our Judaism.

We are still in shock from what happened that Shabbat. Shabbat. In a synagogue. Simply because they were Jews. How could that possibly happen here? And yet, we Jews have dealt with much antisemitism in our history, even in our own American history. In 1915, Leo Frank was lynched; in 1939, amidst hatred and antisemitism, our government refused to accept the desperate refugees on the St. Louis; in 1958, the Atlanta synagogue was bombed. Each time we rebounded, we stood up and said: “Anachnu Kan. We are here.” Each time we thought, “It is over. Never again. We are accepted. We are truly Americans, and antisemitism will never destroy us here.”

But now we wonder. We are in an era of of sinat hinam, of baseless hatred, that has escalated in the past few years, and we are easily driven to despair. Yet if our history has taught us anything, it is lizkor (to remember), to remember that we are commanded not to hate but to love, to be a light to others, to understand that we are not alone and that we must reach out to embrace each other, as well as those of other faiths and ethnicities who also suffer.

It is a strange irony that the Torah portion, which was about to be read at Tree of Life, Dor Hadash, and New Light synagogue services, included the section where Abraham welcomes three strangers into his tent. The flaps of his tent are open wide so he can see them approach. They turn out to be emissaries from God, but Abraham doesn’t know that; his doors are open to receive strangers as honored guests.

There are those who say after Pittsburgh we must shut our doors, lock ourselves within, and turn away from others. No, we must rather always have our doors open to those who enter our synagogues, to those who need us in time of grief, to those who are running from persecution.

HIAS, the Hebrew Immigrant Aid Society, is being attacked doing what they have always done—for helping refugees—just as they helped my husband and his parents flee Nazi Germany. HIAS is doing what Jews do—reaching out to help others. HIAS is a refugee settlement agency like Catholic Charities and Lutheran Social Services; yet HIAS alone is being attacked.

We need to stand with each other and with others in times of sorrow and to make sure such horrors do not happen to others. It was shameful that two African Americans were murdered just for being black, just a few miles from here last week, yet hardly anyone noticed. This too must end.

For me, it was an emotional moment Sunday night at our vigil to be embraced by my Muslim, Sikh, and Christian friends, those I have met through my interfaith work. It was not lost on me that they were there for us because we have been there for them. That is what community relations is all about. Their presence comforted us, as our presence has comforted some of them when needed.

Words matter; actions matter. It is not the horrible, hate-filled words we should hear. We should unite and drown them out and comfort each other with words of comfort, love, and hope. There’s a reason, deep in our souls, why the national anthem of Israel and of our people is HaTikvah, the hope.

As we speak words of comfort and hope, we must act together against hatred that divides us as Americans, the vitriolic words that lead some to horrendous acts. We must fight also against hatred within our own people, some of whom will not even acknowledge all of us as Jews, as religious Jews, as one people.

In these times of grief, it is a time to stand together for what is just and right. The 11 martyrs in Pittsburgh who we mourn today deserve nothing less.

I close with the following prayer by Rabbi Haim Stern:

When evil darkens our world, let us be the bearers of light.
When fists are clenched in self-righteous rage,
Let our hands be open for the sake of peace.

When injustice slams doors on the ill, the poor, the old and the stranger, let us pry the doors open.
When dissent is stifled let our voices speak truth to power.
When bias, greed and bigotry erode our country’s values, let us proclaim liberty throughout the land.

Stay connected to Jewish community news and the lives you change: sign up for our newsletter here.

“In these times of grief, it is a time to stand together for what is just and right. The 11 martyrs in Pittsburgh who we mourn today deserve nothing less.” –Rabbi Margie Meyer