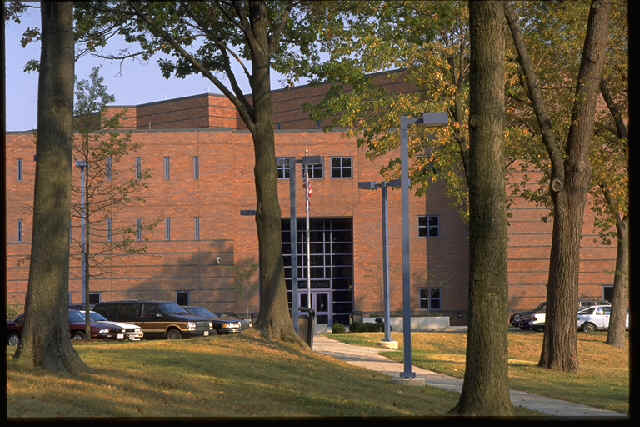 Our JCRC is proud to participate in the Metropolitan Area Religious Coalition of Cincinnati (MARCC), which offers our Jewish community a seat at the table with other communities of faith in the Cincinnati area, so that we can tackle issues of common concern together. Several weeks ago, MARCC organized a tour of the Hamilton County Juvenile Detention Center. Our JCRC Associate Director, Justin Kirschner, and I attended with several others from our Jewish community as part of a multi-faith cohort. Rabbi Margaret Meyer, Past President of MARCC and JCRC Board Member, was with us on that day, and she offered the following reflection of our visit:

To those who work there or are familiar with it, it is called simply “2020.” It’s the large building set back among grass and trees at 2020 Auburn Avenue in Mount Auburn. Its official name is the Hamilton County Juvenile Detention Center, and it’s where nearly thirty Metropolitan Area Religious Coalition of Cincinnati (MARCC) delegates, including JCRC representatives, recently gathered for a tour of the facility. It was interesting, eye-opening, and sad.

The 160 bed facility serves 13- to 18-year-olds, more than 80% of which are male, about 75% African-American. When youth are admitted, they are brought to a magistrate who decides whether they are to remain at the detention center or be sent home, and whether they should be given legal and/or other aid. The physical facility itself is light and airy, as pleasant as such a place can be. It is the situation of the youth, however, that remained with me after the tour. I was startled when ten or so young men arrived in shackles and handcuffs. They had just been to court, and, we were told, had to be cuffed and shackled when transported out of the building, for “their own safety as well as the safety of others.” I thought about my own children at that age, and other children in my community; seeing these boys this way was discomforting.

Those who are released must be released to parents. However, as our host explained, all too often, no parent comes to claim them. When that occurs, they are sent to a Lighthouse Youth Services shelter or, as a last resort, remain at the facility until another arrangement can be made.

Perhaps the most interesting part of the tour was not the “pods,” the area where the youth live and sleep, or even the attractive art room where they draw, paint, and express themselves, but our visit with a medical professional. This pediatrician, who specializes in adolescents, as well as the rest of the medical staff, are employees of Cincinnati Children’s Hospital Medical Center. They care for the incarcerated youth’s medical needs, including tests and exams. One benefit is that with their treatment, they are entered into the Children’s Hospital system, so that their medical records are available and up-to-date if and when the youth arrives at the hospital at a later date. Many of them have never had full medical exams before; here they are finally diagnosed and receive necessary treatment.

This was a glimpse into a part of our society we too rarely think about, yet these youth are our future, and as responsible citizens, we need to be concerned with their actions and treatments. As Jews we are taught not to separate ourselves from the community. We are also taught that our children are our future. It is our duty to raise them, to educate them, and to help them become the best they can in order to ensure the future of the community. They will either be the builders or the destroyers of that future, depending on whether we ignore or participate in their lives. It is incumbent upon us in the Jewish community to care for all our youth, and to work to eliminate the challenging circumstances that can make life difficult for so many kids in our city. The visit to 2020, the Juvenile Detention Center, was an extremely valuable lesson for all of us.

The Metropolitan Area Religious Coalition of Cincinnati (MARCC) is a coalition of judicatories, or decision-making bodies of national denominations. Fifteen Jewish, Roman Catholic, Muslim, Protestant, and Unitarian-Universalist organizations work together on agreed-upon, local social concerns to make life better in metropolitan Cincinnati. MARCC was convened in the 1960s by area organizations, including the Jewish Community Relations Council, interested in working to pass laws prohibiting discrimination of employment, accommodations, and housing. Today MARCC’s priorities are community-police relations and justice reform, and interfaith dialogue on contentious issues and advocacy for human rights.

Thanks to you and MARCC, MARCC delegates learned more about the difficult lives of incarcerated youth in Greater Cincinnati.

“It is our duty to raise them, to educate them, and to help them become the best they can in order to ensure the future of the community. They will either be the builders or the destroyers of that future, depending on whether we ignore or participate in their lives.” – Rabbi Margie Meyer