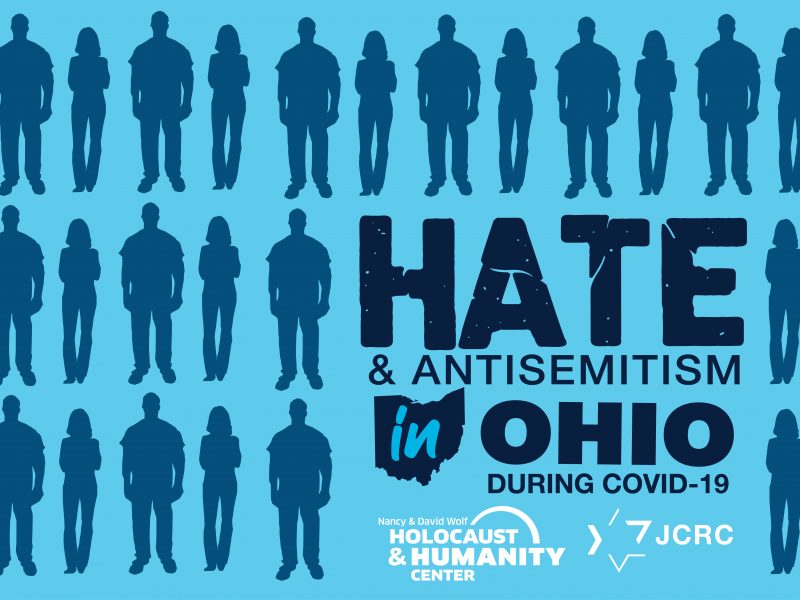 Certain conditions will make a society ripe for the trafficking and adoption of extremist views and can act as an accelerant for hatred, bigotry, racism, antisemitism, and xenophobia. Even before the COVID-19 pandemic, but more so now, the desperation, fear, and uncertainty felt by many, combined with people’s increased usage of social media and consumption of news, has allowed space for an increase in targeted hate messages, including identifying a scapegoat for the coronavirus, both nationally and in the state of Ohio.

The program series, “Hate and Antisemitism in Ohio during COVID-19” sought to inform the broader Cincinnati community about how this moment fits within the larger history of antisemitism, racism, and extremism and to empower people to respond to the hate they see, often in their own backyards. In the wake of the recent killings of George Floyd in Minneapolis, Breonna Taylor in Louisville, and Ahmaud Arbery in Georgia, coupled with the antisemitic vilification of Dr. Amy Acton in Ohio by protesters and politicians, the panel discussions took on particular relevance and meaning.

The webinar series was divided into two parts:

Part one featured panelists Dr. Eric Ward, Executive Director of Western States Center and expert on the relationship between hate violence and preserving democratic institutions, governance, and inclusive societies; Father Michael J. Graham, President of Xavier University and a theological scholar; and JCRC Director Jackie Congedo, who has become a leader among the national Jewish community relations circle on issues of intercommunity dialogue on and understanding of contemporary antisemitism. Sarah L. Weiss, CEO of HHC, who has focused much of the museum’s work on transforming the universal lessons of the Holocaust into action, served as moderator.

Panelists in part two included Shakila T. Ahmad, President of the board of the Islamic Center of Greater Cincinnati; Congedo; Leo Chan, Executive Director of the Greater Cincinnati Chinese Chamber of Commerce; Eddie Koen, President and CEO of the Urban League of Greater Southwestern Ohio; and Christopher Miller, Senior Director of Education at the National Underground Railroad Freedom Center.

In the first panel discussion, both Congedo and Ward cited recent Anti-Defamation League (ADL) statistics that showed a 12 percent increase in antisemitic incidents in 2019, citing 2,107 incidents—the highest rate on record since the ADL began recording data four decades ago.  The data showed that antisemitism was already on the rise in the United States, even before the COVID-19 pandemic. Congedo explained that COVID-19 has exacerbated the disturbing trend, as people’s desperation and fear have created an environment ripe for the spread of conspiracy theory and scapegoating. Notably, all panelists stressed that we are seeing this increase in antisemitic attitudes and rhetoric migrating from the fringes of society and infiltrating mainstream discourse—in some cases, from elected officials.

Recent events in Ohio have highlighted this trend. Whether it was the protester at the Ohio Statehouse holding a sign of a rat with a kippah, suggesting Jews are the “real plague,” or protesters outside the home of Ohio’s Director of Public Health, Dr. Amy Acton, who happens to be Jewish, citing the gospel of John, Ward explained that today, in the midst of an unsettled democracy, there are more public displays of antisemitism. Congedo and Father Graham highlighted that age-old antisemitic tropes are being repurposed and used to target Dr. Acton and the Jewish community.

While the intention of the second panel was to bring local leaders from diverse communities together for a discussion about how minority groups are being targeted with hateful rhetoric during this time, the discussion evolved to address how this pandemic has exposed the stark reality of systemic discrimination toward minority communities, and how African Americans, in particular, are more at risk for developing and dying from COVID-19. Koen shared that before the pandemic, less than one in five African Americans had the ability to work from home, many working essential jobs that continued to operate in-person during the pandemic, or jobs that by their nature could not be done remotely. In addition, issues surrounding access to groceries and adequate healthcare, which existed before the pandemic, have exacerbated African Americans’ ability to manage during the crisis. In Cincinnati, at least 46 percent of coronavirus deaths, and 58 percent of those hospitalized, are African Americans. As fear, uncertainty, and loss of life due to this pandemic continue to impact all communities, but particularly communities of color, there has been a public outcry for change, exhibited by protests throughout the United States demanding justice and potential solutions to systemic racism and discrimination.

During the second panel, Ahmad mentioned that the American Muslim community includes diverse races and ethnicities spanning a wide geographic area, so in many cases, they are being targeted by hate in different and often multiple ways. Similarly, Chan cited the impact of this crisis on the Asian and Asian American communities, who are often falsely blamed for creating or spreading COVID-19. Miller commented on the critical need not only to recognize our own implicit biases, but to follow through with action to implement change.

Congedo sent attendees away with a challenge to take action. She encouraged people in all ethnic and religious communities to tackle the hard work of making progress, by engaging with diverse voices in order to better understand and work toward solutions together, but also by shedding light on these issues to members of their own communities. She said, “Speak truth to the people who are in your circles. This is about where you sit. Who’s in your network, your family, your friends? And start there. If we’re all doing that, then I think we can make a dent.”

“It’s important to be a part of the solution. But it’s not up to the victims to solve the problem. We need to change our individual tendencies. If we change our hearts, we can change our homes. And if we change our homes, we can create better institutions… Through all this, I’m still hopeful. I have no choice to be.” – Eddie Koen, Urban League of Southwestern Ohio