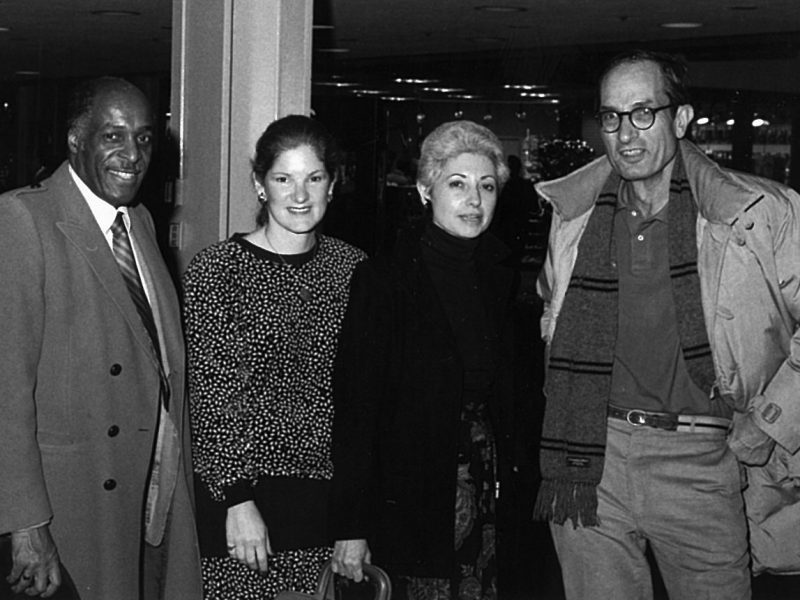 With the recent passing of a giant in our community and a steward for civil rights across the world, Judge Nathaniel R. Jones, we wanted to take a moment to reflect on his legacy in the Jewish community and the partnerships that he developed through his work. – Jackie

Judge Nathaniel R. Jones, federal judge, lawyer, and civil rights activist, is remembered for his sharp memory, his intelligence, his kindness, and his courage to speak out in opposition to conventional wisdom. He was a fierce advocate for civil rights, fighting throughout his career for justice for all people. In this fight, he became a dear friend to the Jewish community, and was a founder of the Black-Jewish Coalition in Cincinnati in 1985 with his colleague Judge Burton Perlman. Their goal was to “pursue issues of concern to both communities, while moving forward on tangible projects,” according Alice Abrams, former associate director of the Jewish Community Relations Council (JCRC). To that end, two task forces were created within the Black-Jewish Coalition: one to address employment, the other inter-group education.

In 1986, Judge Jones and Judge Perlman traveled to the Soviet Union, along with JCRC chair Marilyn Krug and Abrams. The group met with various government officials and refuseniks (Soviet Jews who were refused permission to emigrate). Judges Jones and Perlman also had a chance to meet with their counterparts in the Soviet Union.

Upon his return, Judge Jones compared the experiences of Jews in the Soviet Union to those of people of color living in apartheid South Africa. “Both the Soviet system and the South African system are totalitarian states that use legal means to legitimize repression and deprive individuals of human rights,” Jones said in an interview with the American Israelite.

Judge Jones, who said in the article he went on the trip because he was “a human being interested in human rights,” returned to Cincinnati ready to advocate for Soviet Jewry after seeing the dearth of justice in the government, just like in South Africa. Judge Jones went on similar trips to South Africa before and after his trip to the Soviet Union, “so the comparison was clear in his mind,” according to Abrams.

Judge Jones addressed the clear human rights violations by the Soviet legal system during a speech at the JCRC Annual Meeting in 1987. “Freedom for Soviet Jews,” he said, “must be a deep concern of freedom-loving people of every faith, of every color.”

Judge Jones served as the 1987 Brotherhood/Sisterhood chairman for the National Conference of Christians and Jews, where he oversaw human relations programming and served as the spokesman for the organization in its quest for interreligious and interracial relationships. He was the second ever recipient of the JCRC’s Peace of the City award in May of 1994.

According to Michael Rapp, who served as the director of the JCRC at that time, and who created the award, Judge Jones was chosen because he was a “bright, insightful, and classy guy, who participated fully in the lives of his community and who dedicated his life to creating a fair, equitable, and just society.”

“Judge Jones was righteous among the nations, a kind and compassionate soul, and a true believer in human rights,” Rapp said. “He was a genuine supporter and partner to the Jewish community who came to rely upon Judge Jones as a constant presence, ally, and friend. He was a gentleman in every sense of the word.”

“Freedom for Soviet Jews…must be a deep concern of freedom-loving people of every faith, of every color.”  – Judge Nathaniel Jones, 1987