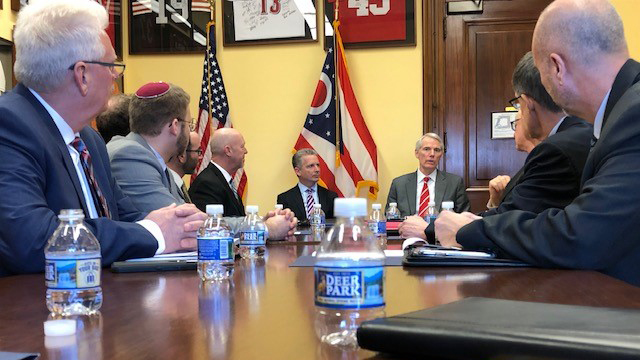 Volunteer and professional leaders from Ohio’s Jewish federations, including Cincinnati, took to Capitol Hill to advocate for increased security funding for faith based and cause based nonprofits at high risk of terror attack.
March 20, 2019 | 0 Comments
Tweet
Share31
Share
31 Shares

This March, volunteer and professional leaders from Ohio’s Jewish federations, including Cincinnati, took to Capitol Hill to advocate for increased security funding for faith based and cause based nonprofits at high risk of terror attack.

“There’s no nice way to say this. A lot of violent people out there hate Jews and want to murder us,” said Howie Beigelman, Executive Director of Ohio Jewish Communities, the statewide government advocacy, public affairs, and community relations voice of Ohio’s eight Jewish federations.

“But we aren’t alone. Not in being targets, unfortunately. Many other religious or ethnic groups face similar violence and threats. And thankfully, we aren’t alone in fighting back. Maybe for one of the first times in Jewish history, law enforcement and policymakers have our backs.”

The delegation met with both of Ohio’s US Senators, Sherrod Brown (D-OH), and Rob Portman (R-OH). Appointments were also set with fourteen of the state’s sixteen Congressional offices.

The group as a whole was one that could express the grave need from every angle. Four professional security directors, including SAFE Cincinnati’s Director Mark Dowd, two community CEOs, several agency or federation executives and JCRC directors could address the practical security gaps and the funding necessary as well as the impact on community life and on the ability to provide social services and philanthropic donations to those requiring help.

“Since the Pittsburgh attack and the arrest in Toledo, our communities have been trying to do more to keep everyone safe,” said SAFE Cincinnati Director Mark Dowd. “We can’t do it alone. 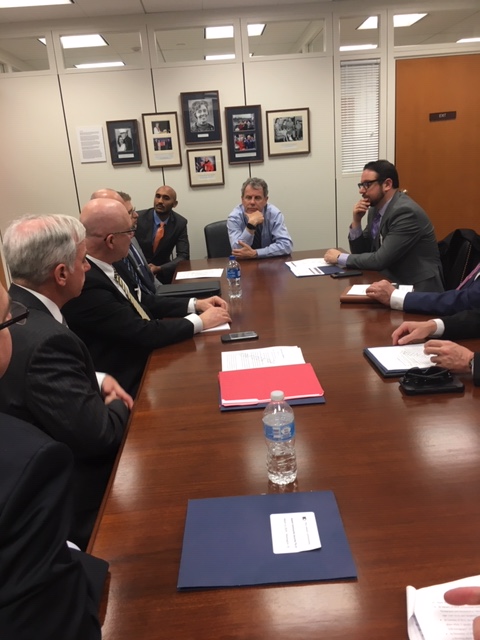 “That’s why it was so important for us to join the Fly-In and why we found the meeting with an aide for Brad Wenstrup to be so critical. He was very attentive to Cincinnati’s needs and will arrange for Congressman Wenstrup to visit our Jewish community soon.”

Indeed, based on very real, current safety priorities, the advocacy focused on the need to maintain and expand both FEMA nonprofit security grant programs, including the original Urban Area program but also the NSGP-S, created last year through the leadership of Senator Rob Portman (R-OH), which provided $10 million overall to states ineligible for the original grant program. Through that, Ohio nonprofits at risk of terror attack received nearly $600,000 in needed grants for target hardening against attack.

As well, the advocates focused on the need for armed security personnel, either as school resource officers or special duty officers, for nonpublic preschool and K-12 schools.

Security to guard houses of worship and schools is a top need of Joel Marcovitch, CEO of JewishColumbus, who appreciated the time all three Central Ohio Representatives, Troy Balderson, Joyce Beatty, and Steve Stivers gave the group. All that, along with the fact that it was a statewide mission, made the event particularly important to him. “It was each community supporting the other in their own advocacy,” he stated. “The need for security personnel in Columbus isn’t different than the need in Toledo or Akron. That’s a big part of what made the day so valuable.”

It wasn’t just the Ohio federations and the Jewish communities across Ohio who joined for this advocacy. Agudath Israel’s Ohio director, Rabbi Yitz Frank, was with the group for part of the day.

Rabbi Frank thought it was especially important that a bipartisan slate of members and offices met with the group. “It was so encouraging to see both our US Senators and our congressional delegation take such interest in the safety of the Jewish community. Their support is deeply meaningful to Jewish communities in Ohio and beyond.”

On the national level, “JFNA, with its dedicated Washington Action Office led by William Daroff, and especially, their homeland security policy lead, Rob Goldberg, was instrumental in crafting our legislative advocacy,” added Beigelman.

Mark Dowd also sits on a SCN committee looking at ways to leverage local needs and national expertise. “The right thing for us to do is to examine and address our local security needs in a way that also supports and boosts the similar needs of other Jewish communities across the country.  We were very encouraged to hear that our Ohio Congressional representatives felt the same and offered their continued support for these collective efforts,” he remarked.

Beyond the immediate needs and legislative advocacy, the day was also an opportunity to update policymakers on innovative ideas and new directions in community safety, many of which require partnership with federal, state, and local law enforcement.

“No one can do this alone. We treasure our relationships with our local departments all the way up to the FBI and DHS,” remarked Jim Hartnett, Director of the Community Wide Security at the Jewish Federation of Cleveland. “Going forward, it will be those connections and collaborations that make the difference. We want our elected officials to understand this value add and the true potential for such partnerships.”

And, everyone agreed that this week’s Fly-In wasn’t an end, but the beginning of an increased and sustained advocacy on community safety.

“We will keep at this,” said Beigelman. “Until everyone in every community is as safe as possible.”

“The right thing for us to do is to examine and address our local security needs in a way that also supports and boosts the similar needs of other Jewish communities across the country.  We were very encouraged to hear that our Ohio Congressional representatives felt the same and offered their continued support for these collective efforts."  —Mark Dowd, SAFE Cincinnati Director