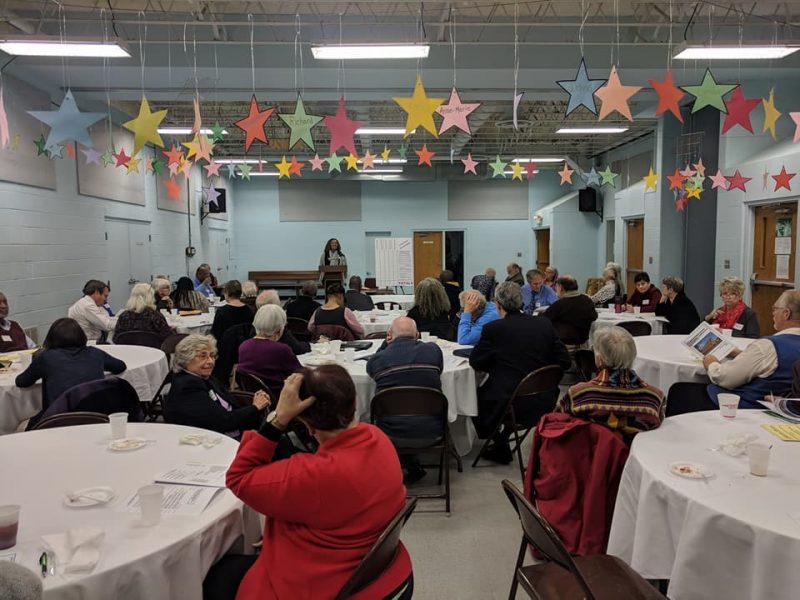 Religious Coalition Sets Priority Concerns for 2018, With Help of JCRC

The Metropolitan Area Religious Coalition of Cincinnati (MARCC), recently held its annual Fall Planning Conference in College Hill. MARCC provides a way for the religious community to speak in one voice to make compassion and reconciliation felt through constructive community action and the development of a community conscience. The membership consists of fifteen judicatories (denominations), made up of Protestants, Roman Catholics, Muslims, Jews, and Unitarian-Universalists. The Jewish Community Relations Council (JCRC) is an active participant on MARCC’s executive committee and helped facilitate conversations during the planning conference that led to the development of MARCC’s priority concerns for 2018.

JCRC Associate Director Justin Kirschner reveals the priority concerns selected for 2018 and explains how MARCC delegates arrived at them.

As we were welcomed into the Fellowship Hall at St. Paul United Church of Christ by Senior Pastor Reverend Bordenkircher, we knew it was time to reflect deeply about this past year’s struggles for justice and equality and celebrate MARCC’s achievements in 2017. One such achievement was the expansion of the MARCC ID card, which provides a recognized, valid form of identification to residents in Cincinnati that have limited access to government-issued forms of ID for a variety of reasons.

After a brief blessing and prayer for hope, we enjoyed a dinner prepared by Power Inspires Progress, an organization that provides training and support for those facing barriers to employment. I enjoyed talking with old friends and meeting new ones. The dinner discussions were fascinating. I spoke with people of other faiths and generations and found commonality in the name of community action and righteousness. One man, who is Baptist, shared the story of how earlier in his career, the US State Department stationed him in Israel for a ten-year stint. We connected over the country’s long history and the current diversity of thought about Israel’s culture and politics. Both of us had been to Israel and both hope to someday return. As a result of that discussion, a bridge had been built between two people from different backgrounds and generations.

In the area of police relations and justice reform, MARCC delegates plan to educate youth and the public regarding the rights/duties of police and citizens’ rights, potentially by distributing info cards people could keep in their cards and reference when stopped. They will also advocate that opioids and all drugs are a health crisis and should be treated and not criminalized; and will advocate for a cultural education for police.

MARCC delegates plan to make an impact in the areas of displacement, affordable housing, and homelessness by educating the general public on the lack of affordable housing; recruiting more congregations for the Interfaith Hospitality Network of Greater Cincinnati; and advocating for the Housing Trust Fund with local lawmakers.

To further these objectives, the MARCC executive committee meets weekly and delegates meet monthly. MARCC continues to be a catalyst for informing the public on community issues, serving as a voice for the people of Cincinnati, and empowering diverse communities of faith to unite to create a more inclusive, just, and equal Cincinnati community for all.

Interested in helping represent the Jewish community as a JCRC MARCC delegate? Contact Justin Kirschner, Cincinnati JCRC Associate Director, at jkirschner@jfedcin.org to learn more about how to get involved in MARCC’s impactful work.

The Jewish Community Relations Council is one of more than fifty programs and agencies funded by the Jewish Federation of Cincinnati.

“As a result of that discussion, a bridge had been built between two people from different backgrounds and generations.” –Justin Kirschner, JCRC Associate Director