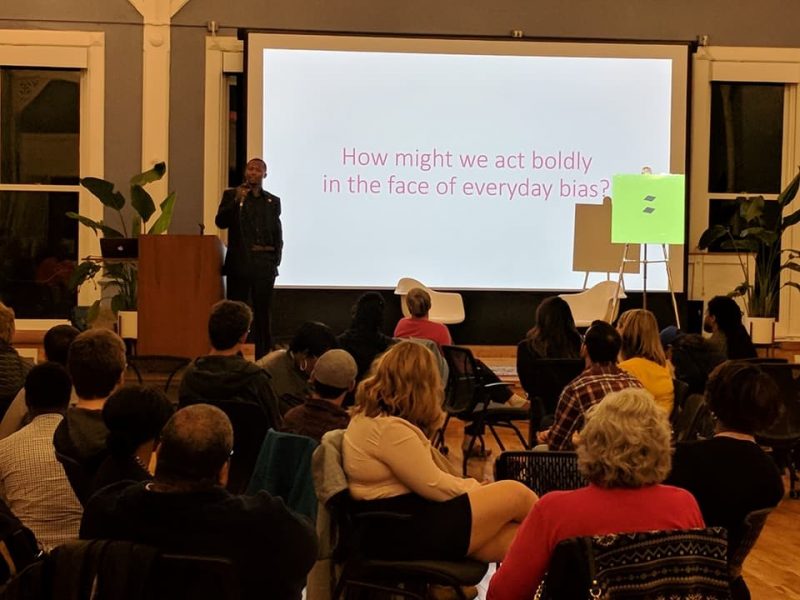 ‘The Talk’ – Unpacking Our Racialized Realities: A Reflection

After the release of a controversial Procter & Gamble ad campaign, several local organizations, including P&G and the JCRC, hosted an open discussion about race. JCRC board member Rebecca Zemmelman attended the event and shares her reflections below. – Jackie

In October, I had the privilege of attending The Talk: A Dialogue about Unpacking Our Racialized Realities, co-hosted by Proctor & Gamble (P&G), the Office of Human Relations, the Jewish Community Relations Council (JCRC), the Urban League Young Professionals, the African Professionals Network, and the Hispanic Chamber of Commerce. The event used a P&G ad campaign about racial bias as the centerpiece for a discussion about the realities of being an African American person living in the United States today.

If you haven’t seen the ad, simply called “The Talk,” from the My Black is Beautiful campaign, you should take two minutes to watch it. It doesn’t preach at you; it is not politicized; it isn’t angry; it doesn’t blame. Rather, it is a glimpse into the daily life of a black person in this country. It shows the conversation, or “the talk,” that African American mothers have with their children about racism. It shows that even though the conversation has changed throughout the decades, it has always been and still is necessary. The parents in the ad caution their children about comments people make about their appearance; prepare them for the derogatory names they will be called; and ensure their children come home at night, safe from violence against them based only on the color of their skin.

The event was eye-opening. As a white Jewish American, I have never experienced racial bias on a daily basis. When people compliment my appearance, there’s never a qualifying phrase. My parents aren’t scared every time I leave the house that I may not come home. For me, “the talk,” was a one-time birds and bees conversation. I grew up with the privilege of not having to think twice about any of these things.

However, the ad is more than just a powerful message. It is a “day in the life” for so many. In my break-out group, every African American person had had “the talk” with their children, many earlier than their kids were likely to even understand what it meant. They agreed it is not a one time talk, but rather an ongoing conversation that they have with their children as they grow up and face different circumstances. The white people in my group, on the other hand, all shared my experience.

After watching this ad, and engaging in the very real, meaningful, and hard conversations that followed, I am more sure than ever that no matter how many seminars I attend, committees I work on, or programs that I plan that revolve around racial and social justice issues, I will never fully understand what it is like to not have the privilege of having white skin in this country. As such, I have taken it upon myself to acknowledge my implicit bias in this world and strive to have compassion for the other.

Jewish people have sometimes been “the other” throughout history, which is why it is so imperative that we work together to support other minorities and work to understand others and their experiences on a more meaningful level.

I appreciate P&G’s efforts to encourage dialogue about racial bias in the United States and am thankful for the JCRC and other organizations for creating an environment for productive and open conversation.

The Jewish Community Relations Council is just one of the more than fifty programs and agencies funded by the Jewish Federation of Cincinnati.

“For me, ‘the talk,’ was a one-time birds and bees conversation.” – Rebecca Zemmelman