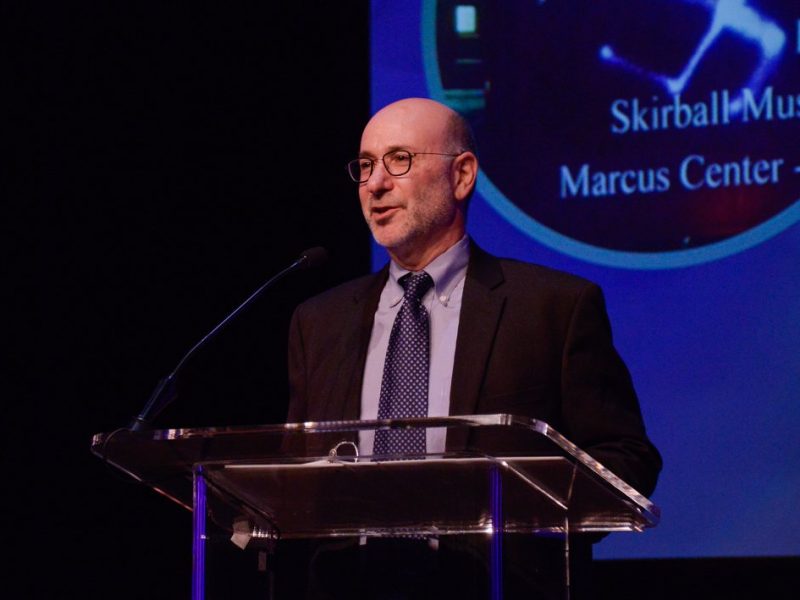 JCRC President Walter Spiegel gives his remarks about the work of the organization at the JCRC Annual Meeting in June.
June 27, 2018 | 0 Comments
Tweet
Share42
Share
42 Shares

Over the last year, the JCRC took bold steps to further our mission, which we shared with more than 250 people at our Annual Meeting in June. President Walter Spiegel spoke eloquently about our efforts to combat hatred in all forms, including leading in the formation of the Cincinnati Regional Coalition Against Hate; to get young adults involved in civic engagement; and to advocate for comprehensive immigration reform, an issue that touches him personally. I took a look at the coming year, and discussed ways in which we will be intentional and nuanced in our approach to fighting antisemitism and how we can empower diverse voices to come together on the topic of Israel. And we heard a powerful message from Christian Picciolini, a former violent extremist, who now helps people leave the hate movement he helped create. I’m proud of the work we are doing and am looking forward to building on our momentum in the coming year. —Jackie

The theme of this year’s Annual Meeting was United Against Hate, a recognition of our commitment to stand together with our diverse partners to combat hate and bias and promote inclusion. In this video, members of the Coalition answered the question, “What does it mean to be united against hate?”

One year ago, when I assumed the presidency of this historic organization, I spoke about some of the challenges facing our community. For example, the ADL was reporting an 86% percent increase in antisemitic incidents across the country, BDS resolutions seeking to isolate Israel were on the rise at college campuses across the Midwest, immigrant communities were increasingly characterized as the source of all societal ills – a charge that we in the Jewish community understand all too well – and civility and tolerance for opposing viewpoints were becoming the exception to the rule, often even in our own Jewish community.

Responding to these challenges goes to the heart of the mission of this organization: to protect the security of the Jewish community, with a recognition that Jewish security depends on a just society for all people.

I wish that I could stand here tonight to report that through the efforts of JCRC and other like-minded organizations, these challenges have now been fully resolved. Alas, as everyone in this room knows all too well, the reality is that over the course of the past year, the challenges that I highlighted, along with new challenges that threaten the security of the Jewish community and call into question the cause of justice, have become even more acute.

Last August, neo-Nazis marched through Charlottesville, Virginia, chanting Nazi era slogans such as “Jews will not replace us” and “blood and soil.”

A dysfunctional Congress and an Administration that speaks about immigrants in dehumanizing terms and separates young children from their parents have failed to advance legislation that would protect law abiding young adults who were brought to this country as children.

And our schools, where we drop off our children in the morning so they can learn to be contributing members of society, have become targets, with consequences that have tragically touched our community and our own JCRC.

So as an organization, how should we respond to these increasingly challenging times? Our answer is straightforward: we will continue to fight to protect the security of our community and to create a just society for all people. But in doing so, we recognize that in this fight, we are not alone.

After all, the hatred expressed by those neo-Nazis in Charlottesville was not focused solely on the Jews. Hate groups are equal opportunity haters, targeting not just Jews but also our friends in the African-American community, the Latino community, the Muslim community, the LGBTQ community, and all other communities that do not fit within their distorted view of what American society should look like.

And so tonight, we are highlighting the response of the Cincinnati community: the formation of the Cincinnati Regional Coalition Against Hate. The Coalition includes 19 organizations representing a diverse array of ethnic and faith-based groups. It is a nonpartisan alliance of organizations committed to being vigilant of and opposing hate activity by supporting impacted communities, responding in solidarity, and offering community education to foster acceptance, compassion and justice.

Hatred is not an innate human characteristic but a learned response. And just as hatred can be learned, so too can we teach our children to value diversity and inclusion. As a founding member of the Coalition, we intend to work with our coalition partners to develop and implement programs that will teach tolerance and warn against the dangers of extremism.

Over the course of the past year, JCRC has worked on other issues that we believe must be addressed to fulfill our mission of creating a just society for all people.

For example, our Immigration Committee, chaired by Mark Barsman, partnered with AJC Cincinnati to advocate on behalf of the Jewish community for passage of the Dream Act.

On another issue of importance to the security of the Jewish community, our Cincinnati JCRC, through Ohio Jewish Communities, our state-wide advocacy partner in Columbus, is working with the other JCRCs across the State to support Governor Kasich’s proposal to pass common sense gun safety legislation in Ohio. The Board of JCRC supports the Governor’s proposal and we call upon all of our local elected representatives to do likewise in this legislative session.

Thank you to John Youkilis for leading this effort – I know this is a deeply personal issue to you and your family.

And so as I look back on the first year of my presidency and consider what new challenges await us in the coming year, I am confident that our organization continues to be up to the task.

As part of our strategic planning process, we have identified priority issues of concern, including responding to antisemitism and hate, advocating on behalf of Israel, and supporting immigration and criminal justice reform.

And we have created new committees to work on these issues, including for the first time a Young Adult committee that will provide a vehicle for young adults in our Cincinnati Jewish community to become engaged in these issues of concern. Our Associate Director Justin Kirschner and Board Member Rebecca Zemmelman are leading this effort called L’Shem Cincinnati—JCRC’s new young adult civic engagement arm.

Since I will always be a recovering journalist, I’m going to start with a few headlines:

“Did the federal government really lose track of almost 1,500 immigrant children?” reads a May 29 CBS report.

The problem with this mode of operating—when the stakes are this high — is that neither path provides a way forward. How can we make any progress on these critical issues if the extremes continue to dictate our options for action?

In moments like these—the key to progress is our capacity to hold complexity. Our insistence on nuance. Our ability to face the inconvenient truths that eat at our own argument. Our courage to reject binary options—because rarely are situations black and white—and to, instead, grow more comfortable living in grey realities.

And our pursuit of complexity and nuance has to be intentional. It’s an art that must be practiced. Fortunately, this is the wheelhouse of the JCRC.

This year was no different.

When Richard Spencer threatened to bring his hateful message to the University of Cincinnati, we reached out, co-hosting a forum to help community leadership understand the hate group threat. We partnered with our allies in other communities through the Coalition Against Hate to think through a response that would showcase our diversity without giving Spencer’s agenda fuel and attention.

When violence erupted at the Gaza border, we utilized our weekly Israel Update newsletter to circulate accurate information and analysis that adequately conveyed the complexity of the situation.

We also believe it’s important to send Cincinnati thought leaders to Israel, to help them see the Jewish state for themselves and to bring back the complexity and the nuance. This year, we partnered to send Ohio Representative Brigid Kelly and Cincinnati City Councilwoman Tamaya Dennard on their first trips to Israel, where they were able to see firsthand that you can, in fact, be pro-Israel, pro-Palestinian, and pro-peace all at the same time.

We know it’s a sign of a meaningful trip when participants come back and tell us they have more questions than they started with. That speaks to this priority of building capacity for complexity in our binary world. And while it feels lonely at times, the JCRC will continue to be a place for diverse conversation, nuanced thinking and bridge building in the year to come.

We will continue to empower diverse voices to come together on the topic of Israel. Right now, we are working with Resetting the Table, the Jewish Federations of North America’s civility initiative, to design workshops for our Jewish community and our friends in the greater community, where we can explore our own Israel narratives and divergent viewpoints on Israel in a safe space.

We will continue to convene and participate in robust debate about policies that move our community forward. We are in the process of planning an election forum for this fall that will go beyond politics to put the issues of Jewish security and justice front and center for candidates to discuss.

And, the JCRC will continue to lead as an executive committee member of the Cincinnati Regional Coalition Against Hate. At this time I’d also like to thank the members of the Coalition who are here with us tonight—I am inspired every day to be doing this important work alongside you. And I’d like to give special recognition to Barbara Perez, Desire Bennet, and the entire team at the YWCA, which is convening the Coalition and serving as the Coalition’s fiscal agent.

"Hatred is not an innate human characteristic but a learned response. And just as hatred can be learned, so too can we teach our children to value diversity and inclusion." —Walter Spiegel